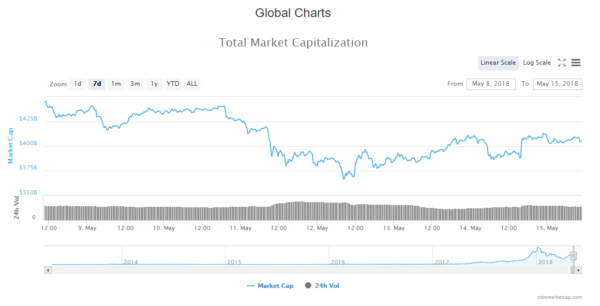 Since yesterday’s low at $386,345,000,000, the Cryptocurrency Market Capitalisation has been increasing rapidly and has reached $413B, from which it has retraced a bit to $407B, where it is now sitting.

As you would presume, the market is in green, with small exceptions on those cryptos that experienced a rise in price while everything was decreasing. Biggest gainers among top 100 are Zcash (44%), Salt (17%), Enigma (16%), and average increase is from 5-12% among the top 100.

Top stories that came out in the last 24 hours are extremely positive. These are some of the significant headlines:

The President and CEO of the New York City Economic Development Corporation (NYCEDC) announced blockchain-related initiatives for the city today, May 14. The initiatives include the launch of the NYC Blockchain Resource Center and a public competition for blockchain apps to improve the public sector.

The Chicago Mercantile Exchange (CME Group) in partnership with Crypto Facilities, a UK-based digital asset exchange specializing in crypto futures, have launched the CME CF Ether-Dollar Reference Rate and Real Time Index, according to an announcement May 14. The indexes will provide users access to a real-time Ether (ETH) price in US dollars.

US: Seminole County Florida To Accept Crypto For Tax Payment

The Seminole County, Florida, tax collector Joel M. Greenberg announced May 14 that the county will begin accepting cryptocurrency for payment for various services this summer in order to eliminate heavy fees and improve payment accuracy and efficiency.

Eric Piscini, former Global Blockchain Leader and Partner at one of the “Big Four” consulting firms, Deloitte, has left the company, Forbes reports May 14. Piscini, who helped build a $50 mln global blockchain practice, is joining the startup Citizens Reserve to move supply chain networks to a blockchain.

The first cryptocurrency exchange to use US stock market giant Nasdaq’s technology revealed it plans to launch next month in an exclusive with Finance Magnates Monday, May 14. Nasdaq, the second largest stock exchange in world by market capitalization after the New York Stock Exchange (NYSE), is providing the technology to power the new centralized crypto exchange, DX, according to the project’s CEO Daniel Skowronski. Skowronski called the upcoming exchange a “one-stop-shop” for “exchanging fiat and crypto, holding coins and as well as wallet services.”

Looking at the daily chart, we can see that the price is currently below the 50-day EMA with which it interacted with and bounced back, leaving a wick from the upside. Yesterday’s candle closed as a Doji with a higher wick from the downside which indicates buying pressure.

Zooming into the hourly chart, we can see that the price is currently in an upward channel that intersects the downward one. The price has broken the upper resistance line of the downward channel and retested it for support.

Hourly chart technicals are on neutral.

Oscillators and moving averages are both on neutral.

On the daily chart, we can see that the price interacted with its 0.618 Fibonacci retracement level yesterday, and has retraced since closing as a shooting star. Today’s candle is currently a doji which means indecision.

As in the case of Bitcoin, the price of Ethereum is in an upward channel on the hourly chart and is currently interacting with the support line.

Oscillators are on neutral, and moving averages are signaling a buy in a 6:8 ratio.

Looking at the daily chart, we can see that the price of Ripple interacted with its support at $0.7 and quickly bounced back, closing on a Doji yesterday. Since then the price is slightly up, as indicated by today’s green candle, but it hasn’t exceeded the 0.382 Fibonacci retracement level which serves as resistance.

Zooming into an hourly chart, we can see the interaction with the 0.382 Fibo level. The price is above 50 and 100 hourly EMA’s which look like they are about to cross in a bullish manner. The price action is currently forming an ascending triangle, which usually means that the price will drop the same hight as the triangle, which would be somewhere around $0.692 in this case.

Oscillators are on sell, and moving averages on neutral in a 7:1:7 ratio.

The corrective move is definitely over, but it may be only the first one, and we are seeing a retracement to the upside before more downfall. I am still bearish until I get a confirmation. And the confirmation would be if we see the evaluation of the cryptocurrency market cap above $470B levels, which would be a higher high than on the March 5. on which this downfall to $250B levels started. There is a lot of indecisiveness in the price action and a lot of uncertainty at the moment.