From yesterdays highest point at $412,9B  cryptocurrency market capitalization evaluation fell approximately by 40B, coming to $372,9B this morning. 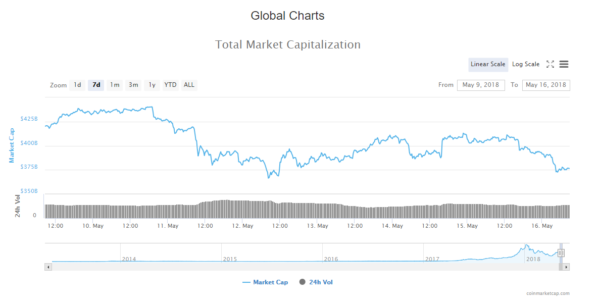 Top stories that came out in the last 24 hours are mostly positive in sentiment. There are many established companies mentioned starting to adopt blockchain technology, or starting their own blockchain projects. Here are some of the significant headlines:

IBM announced a partnership with Veridium Labs to tokenize carbon credits that will allow companies to track their carbon footprint with blockchain today, May 15, in a press release shared with Cointelegraph.

FedEx CEO: Blockchain Is The ‘Next Frontier’ For Global Supply Chains

Delivery services multinational FedEx said it is “quite confident” blockchain has “big, big implications” for supply chains in a speech May 14, as it continues engagement with the technology.

The four products – Coinbase Custody, Coinbase Markets, The Coinbase Institutional Coverage Group and Coinbase Prime – all focus on alleviating major concerns that have allegedly caused institutional investors to hold back from entering the cryptocurrency space so far, such as security and regulatory compliance.

World’s Fifth Largest Bank To Trial Own Cryptocurrency In 2019

The banking unit of Japan’s Mitsubishi UFJ Financial Group (MUFG) plans to trial its own cryptocurrency as early as 2019, Cointelegraph Japan reports today, May 15.

Belarus considers the digitization of the economy a top priority and is developing a resolution promoting digital economy for a session of the Parliamentary Assembly of the Organization for Security and Co-operation in Europe (OSCE PA), local news BelTA reports May 15.

On the daily chart, we can see that the price has fallen below 0.382 Fibonacci retracement level and is now sitting at the level of the opening candle on the 12th of May where it temporarily found support.

Looking at the hourly chart, we are seeing that the price broke out of the upward channel support line, and is heading towards the 0.236 Fibo level.

Bitcoin is still in the sell zone.

Oscillators are signaling a sell, and moving averages a strong one.

Looking at the daily chart, we can see that the price has fallen to the levels on the opening candle on the 13th of May. 50 day and 100 day EMA are getting closer, and if 50 EMA goes across the 100 day from above, we will get a buy signal. However, I doubt that is going to happen, as the down move is only getting larger.

As you can see from the hourly chart, hourly EMA’s are crossing in a bearish manner, meaning 50 hour EMA is crossing 100 EMA from above. The price has broken out of the upward channel and has bounced off of the prior downward channel resistance line.

Oscillators are on sell, and moving averages are on strong one.

On the daily chart, things haven’t changed much. The price action is still between 0.236 and 0.382 Fibonacci retracement levels, below 50 day and 100 day EMA’s.

On the hourly chart, we are seeing a breakout from the upward channel from the downside, like in the case of Bitcoin and Ethereum, which shows a strong correlation in the market. The price found temporary support at the levels of the channels starting point.

Ripple is in the sell zone with hourly technicals signalling a strong sell.

Oscillators are signalling a sell while moving averages a strong one.

Daily Crypto Market Update: While we have seen a bullish move in a form of upward channels yesterday, today we are seeing a breach from the downside. From this, I conclude that the correction to the downside is continuing and we are in for new lows.