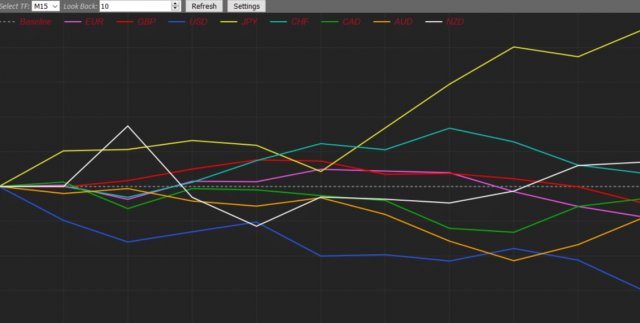 When you go ahead and type into the Google Currency Strength Meter, believe it or not, you will see that this tool gets over 14000 searches per month average. This is almost the same as one of the most popular indicators RSI. Can you imagine?

So, what is the currency strength meter?

This is the kind of visual map – guidance that demonstrates which currencies are strong and which ones are weak in a certain moment. It uses the exchange rates of different currency pairs to show comparable strength of each of those currencies. There are different Currency Strength Meters to be found out there. The simpler ones may not use any weighting, while more complex and advanced ones may apply their own weightings. Some may even combine other indicators with the currency strength measurement in order to provide trading signals. For example, to calculate the strength of the EUR – this tool would calculate the strength of all pairs that consist of EUR currency, and then use those calculations to determine the strength of the EUR.

What this tool actually does is to give you information about 8 major currency pairs, mostly, based on the fact how strongly these currency pairs performed over a certain time frame. It tries to give you an overall picture of which currencies have been strong and which ones have been weak for those periods. For Currency meters, the most common time frame is 24 hours. The one that knows will notice that most similar to this tool are Forex Heat Maps – which essentially do the same thing.

As it may happen with any tool, Currency Strength Meters may have their own issues, particularly when they are poorly coded. If CSM cannot give accurate currency strength indicator values, it is of little use – regardless of their other features. With outdated Currency Strength Meters, traders may experience the following issues: MT4 can freeze, PC or laptop can freeze, stutters, whipsaw signals, memory leakage, your CPU keeps on 100%, and so on. Some of these tools that you can find out there might even produce data that were not part of the original concept of Currency Strength Meter. Some traders apply smoothing filters to this tool, like moving averages, for example, while some traders apply other filters like the RSI or MACD. By adding these filters on top of the CS meter, traders may even experience getting some false trading signals, and they can enter some bad trades which may lead to the money loss.

In years of existence, Forex strength meters developed to currency correlation matrices that could quite possibly deliver more accurate and better information, so this can be one of the ways to measure currency strength that a CS meter gives you. Since currencies are traded in pairs, for example, EUR/USD, you can use correlations to measure the strength of individual currencies like EUR and compare it to Currency Strength Meter.

Some advantages to using Currency Strength Meter including its obvious simplicity, are the usefulness as a short-term indicator, the ability to avoid double exposure and unnecessary hedging, the possibility to signal high-risk trades, and last but not least, it is available for free.

There is an opinion of certain traders that the most usual thing that new traders do when they discover these tools, they get an idea that the hardest thing in trading is to put some money on the account for start, and after that money just comes – drops from the sky in loads, you just need to apply this easy and cool tools. Indeed.

They conclude that these are the tools that only tell you what just happened, not what is going to happen – suppose that this should help you profit in your trades? Their standpoint is that charts already give you this information. Actually, what they mean is that you have charts for 27-28 different currency pairs and this has been confirmed as better and more reliable than any Currency Strength Meter. Carefully built experience in trading, so far, has shown that brokers that make money by taking the other side of your trade very much love this tool – to put you on to use it frequently in order to make money on your trades.

From their point of view, how these tools work is that the meter is taking readings from every forex pair over the last 24 hours and applies calculations to each. Then it by algorithm finds the current strength in the pair and gives you a visual guide. It displays which currencies are strong and which are weak at any given moment, reflecting that movement in a gradually colored matrix. Only by using an effective currency strength meter, you will have another tool at your disposal that will empower you to become a profitable trader. You must admire the sound of it!

The claim is that another thing that can attract the novice is the simplicity that this tool has. It is quite easy to use it, even though it doesn’t give much of a result in practice, to be honest. Listening to this, the conclusion to be drawn is that Heat Maps and Currency Strength Meters are not very useful. If you wish to stick to it, after all, you can do it on your own and they wish you a load of luck because you will need it by far.

Now, what they say about the Currency Strength Indicator, is that it is a little bit different in the outer look. They explain it as a graph with an overview of the strength of a currency, presented with lines in different colors. It is just a line version of Currency Strength Meter. It measures the strength of a currency based on all of the currencies that are available with your Forex broker in the last 24 hours or the period setting of your choosing. It then applies calculation and assigns individual strength to each currency and presents information in an easily understandable way.

What this indicator actually does is to allow you to overlay several currency pair graphs (lines) on top of each other so you can see and try to predict where the price of a certain pair may go next. This also can be used as a two-lines cross indicator – a position where you would make a move after two chosen lines finish crossing each other, or as a reversal trade, when two different lines both appear at their extremes.

We gave this indicator enough of our time and attention and tested it thoroughly. Unfortunately, it doesn’t give results strong enough to rely on it and to base your future trades on its results. However, you may discover something we don’t know yet, and we are all different people. The systems each trader builds, even if based on the same ideas are also different. If you like the idea of it, our suggestion is to try, to test it and see where it will get you. It could be worth trying.

What you can do, also, is to go out to search for other places where different versions of Currency Strength Indicators can be found. Choose a couple, or more, that you like, download them, and start to test them. Try to test the indicator, up against a chart and see how it performs on its own first, before testing it out against other indicators or with other indicators.

You will certainly get better results by adding any momentum indicator that has enough volume behind it. We suggest doing the back-testing standalone and after that, test it together with the volume indicator already attached and measure test results when you are showing enough volume to do so. This thing should give you a million of false signals when there is no real volatility in the market. By our experience so far, it should make a big difference in overall results and this could be the most efficient way. Even though we don’t truly endorse it, there is a possibility that it might work for you.

This indicator is very unique to most of the indicators out there and should be handled accordingly. The conclusion from this would be that Currency Strength Meter is a sort of useless standalone, redundant and it is made only to get the novice in trading excited and in a better position to lose their money very fast.

Currency Strength Indicator could be, possibly, a little better – it may be worth testing if you choose to do it wisely and properly. The currency strength indicator is not an indicator that should be used on its own. Rather, this indicator can complement your existing trading strategies and could help you to pick the right combination of the currency pair to strength.