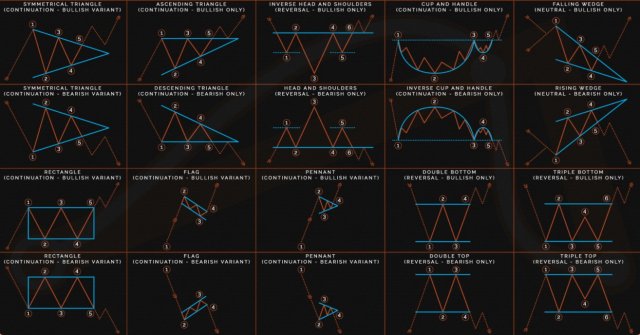 If you are new to forex trading, chart patterns are likely to attract your attention quickly because the trader community is full of praises for this kind of trading. They will certainly seem appealing due to habits developed from a young age when our parents used different shapes and forms to keep us entertained and amused. Nowadays, the entire toy industry and children based video games are based on shapes and forms used to provide preschool education to toddlers and children. Our brains are naturally wired to see patterns in every abstract form, be it star constellations or forex charts. We give meaning to randomness. Therefore, who could blame you for jumping on the chart pattern bandwagon once you enter the world of forex trading?

Indeed, some pattern names will easily trigger childhood memories that instantly attract you to explore more about pattern trading: triangle, wedge, rectangle, flag, and pennant. Some of them are appealing enough, such as head-n-shoulders or cup-n-handle. It just sounds like fun and games, and why not have some of it while trading. To make things more serious, most traders will tell you that it works and they will provide you with an abundance of examples. But the question is: have you learned to lose fun games when you were a kid?

The question is posed because there is not much information available on when chart patterns are not working. In reality, chart patterns supporters will show you examples when chart patterns have already worked but will rarely share the failed stories on using patterns that have completely misled them. The first instance would obviously create an image of a prominent trader, while the latter would discredit them and portray them as a showoff. Therefore, psychology plays a significant role in chart pattern trading as the availability of successful examples plays hand in hand with the trader’s inclination and ability to boost self-confidence. Reliance on the limited information that is available to the narrow circle of traders and a strong belief in skills that provide an advantage over the competition will eventually lead to overconfidence. Such a mindset represents a perfect stage for doubtless use of chart patterns as successful examples visible only in the aftermath is seen as an actual confirmation of self-confidence and perceived ingenuity. This fact is your first red flag when considering chart patterns as your go-to strategy in forex trading.

It is also important to keep in mind that the overwhelming majority of traders are impressed by chart patterns, which is why new traders are attracted to this kind of trading. It is a classic example of social learning theory that can be summarized as the acquisition of new behaviors by noticing and imitating the behavior of others in the group. That same theory is proven in social experiments in which a random person not aware of the experiment is acting the same way as the group participating in the experiment, without even knowing the reasons for such behavior and regardless of how ridiculous that behavior may be. Simply put, chart patterns should not be utilized without any doubts just because the overwhelming majority is doing so, according to the contrarian traders’ opinion. This resonates as the second red flag especially if you put in the perspective that the majority of traders are on the losing end of the forex market.

As a beginner, it is not easy to spot a forming shape when looking at charts. In fact, you have to draw it yourself and there are no clear instructions on how to do it. Line drawing can cause a lot of frustration, consume much of the precious time, and requires plenty of creativity. You are bound to make mistakes, redraw numerous lines and shapes and it still does not guarantee success. A good example that demonstrates drawing patterns is a matter of frustration rather than efficiency is drawing trend lines. As you may know already, traders analyze charts in numerous different manners and therefore see trend lines arising at different points. Therefore, your decision on breakouts and entry points will differ from other traders and chances are that the same is applicable to drawing chart patterns. There is simply no consistency in drawing patterns. When the first red flag is added to the equation, the fact that chart patterns work perfectly for others makes us question our own abilities and we quickly start blaming ourselves when the drawn patterns are not giving results.

Finally, it is not shapes and forms that move the prices but the big banks reacting to the retail traders. None of them are putting effort into creating triangles and wedges on the charts. On the contrary, they are bound to form eventually as a natural process of market movements. Their natural formation is not a clear indicator that prices are going to take a direction predicted by the pattern, despite the time amount invested in identifying the pattern. The reality is that the prices still have even odds of going one way or another, and there are more systematic ways to connect the dots that give us a higher chance of success than chart patterns.

Forex trading is not universal science and many different strategies and approaches could be used – and even developed – by traders. Those who develop unique trading systems based on evidence that demonstrate consistent results are more likely to achieve success, simply because they start to trust the process over time. In the process of building their exclusive trading system, traders develop a greater understanding of arising issues and use distinctive rationale thus dealing with market obscurities more effectively. Such traders do not waste time identifying and drawing shapes nor do they adjust their skills and knowledge to the chart pattern system that has not been empirically proven.

Although chart patterns are not supported by practical evidence that would confirm their (in)famous reputation, the red flags pointed out in this article represent just one school of thought. There is no need to change the system heavily relying on chart patterns that yield profits, as it certainly is a powerful tool for those traders who found the winning formula. Such traders may have a strong argument on using chart patterns; however, they cannot draw the lines and shapes for all the traders who just can’t get it right. And it is no surprise overwhelming majority struggles with chart patterns since there is more evidence available on why chart patterns do not work in practice. Once caught in its web, it is difficult for traders to break away from the habit of identifying shapes on the chart. Moreover, they tend to modify their systems and overthink when they spot a shape on the horizon. In an effort to avoid this trap, any trader should eventually pose the same question when getting lost with chart patterns: would I rather trust my own work and judgment or follow the signs along the way?