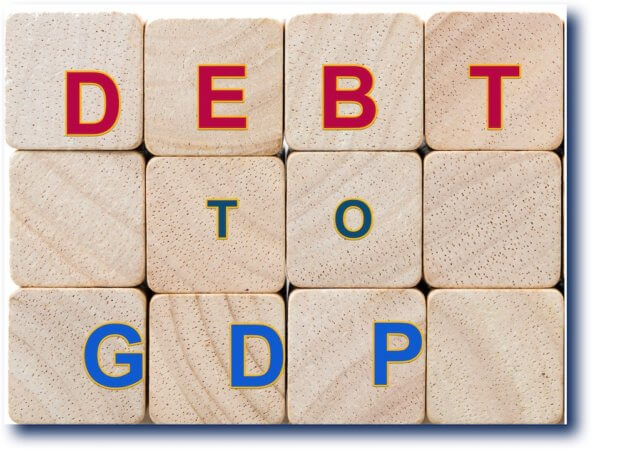 What is the Government Debt to GDP?

The government Debt-to-GDP ratio is simply the ratio between the country’s total GDP (Gross Domestic Product) to its total debt. It is computed by dividing the total debt the nation has in a particular year to that of the GDP figure for that year.

This ratio is also useful to help determine the number of years that a country would need in order to pay back the debt if the total GDP is solely dedicated to the repayment. The debt-to-GDP ratio also measures the financial leverage of an economy.

What Does the Debt-to-GDP Ratio Tell You?

A financial panic in domestic and international markets is triggered when a country is unable to repay its debt. Governments will strive to lower their debt-to-GDP ratios. However, this can be difficult during periods of unrest or when the country is in an economic recession. When this occurs, governments like to increase borrowing in an attempt to stimulate economic growth.

Some economists adhere to the modern monetary theory (MMT), which argues that sovereign nations that are capable of printing their own money can’t go bankrupt as they can simply print more fiat currency to cover their debts. However, the nations of European Union (EU), who have to rely on the European Central Bank (ECB) to issue euros, do not apply to this rule because they do not control their own monetary policies.

A  recent study by the World Bank found that countries whose debt-to-GDP ratios exceed 77% for extended periods will experience a slowdown in economic growth. It is important to note that every percentage point of debt above this level costs countries 1.7% in economic growth and is even more pronounced in the emerging markets, where each additional percentage point of debt over 64%, annually slows growth by 2%.

Sources of information on ‘Debt to GDP Ratio’ for Major currencies:

Public Debt figures are released quarterly by the World Bank and the International Monetary Fund (IMF), therefore, investors and agency ratings are able to compute this ratio on a quarterly basis.

What do traders care about the Debt to GDP ratio and its impact on the currency?

As we already know, the government debt to GDP ratio indicates the ability of a country to repay its debt, and a higher Debt to GDP ratio for an extended period of time means that the country is more likely to get default on its debt. This leads the foreign banks and governments to lend more money to these countries, and they increase their interest rates to mitigate the high risk involved. Aa a result, the economy of the country will slow down when there is a high debt to GDP ratio. A weak economy can indicate that there may be depreciation of that currency. This is why this ratio will be an essential factor for forex traders to consider when they trade on the Forex market.

If a country has a high debt-to-GDP ratio for an extended amount of time, it can indicate a recession as a country’s GDP will go down in a recession. This will also affect the people living in that country as governments tend to increase taxes to keep up the revenue. The lending governments will have more faith in the county to repay their debts if there is a high return on the debt that is borrowed. If there is a high risk involved due to less return on the debt that is acquired, this will question the lenders. Another important factor to consider is that the lending institutions earn a high rate of interest on the debt that is provided, So they won’t mind the country in question not paying back their debt, as the lending country can earn high interest from the debts they have provided.

From a traders’ point of view, it is better to have an overall view on what the country’s debt to GDP ratio is and to forecast if the specific country is likely to repay their debts or default on payments. If this fundamental analysis indicator factor is ignored when doing your due diligence for long term trades, then there is a high probability of the specific currency to depreciate in the long run, if that country defaults on its debt.