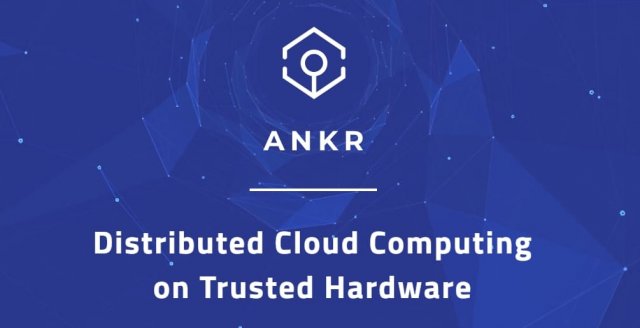 But even as these big companies dominate the industry, the potential of data centers remains vastly underutilized. There remains so much idle computing power around the globe that could be harnessed to provide cheaper and more efficient cloud computing services.

Ankr is a cloud computing platform backed by the power of the blockchain. With blockchain comes increased speeds, transparency, and more inclusivity. The Ankr team believes idle computing power needn’t go to waste and that it can actually replace the need for CSP’s altogether.

In view of this, they want to create a system where people from everywhere can utilize others’ idle computing power. And it’s not just setting its sights on repurposing idle computing resources: Ankr wants to go beyond and provide an infrastructure to power the Internet of Things (IoT) and other emerging economies.

Suppliers of idle computing power will be able to make money off it, whether they’re using a mobile phone, an on-premise data center, a private cloud, etc. Ankr wants to help companies create a production environment where they can leverage people and the latest technology independent of a centralized entity and vendor contracts.

As of the time of writing, Ankr has over 8,000 nodes deployed all over the world.

Ankr is a decentralized cloud computing platform supporting all manner of players in an industry that includes resource providers, end-users, app developers, and more. The Ankr team believes that cloud computing is the best way of the future, and that should be avoidable for everyone instead of being monopolized by tech giants like Google, Microsoft, Alibaba Cloud, and Amazon AWS.

Ankr will give developers the ability to deploy more than 100 types of blockchain nodes. The idea is to offer a pragmatic business model where data owners monetize their idle cloud resources, and developers can utilize them to run various services more effectively.

Some of the highlights of Ankr include:

This layer supports fast network routing. All nodes on the relay layer support full nodes, except these full nodes will not produce blocks or participate in the consensus. Users have the option to add more efficient networks on top of this layer. They also stand to earn ANKR coin rewards for Proof of Network Contribution (PNC). The amount of rewards will depend on a node’s relayed packet number, network bandwidth steadiness, and service quality.

This layer supports data center nodes, mining nodes, and edge computing nodes. All these contribute to the safety of the network by preventing illegal node access.

This layer supports device nodes and transaction hashes. Smaller nodes, such as phone-based ones, are the ones referred to as micro-nodes.

Ankr’s DCCN system is deployed across various computing resources over varied geographic locations. The Kubernetes system manages these resources, arranging them in clusters through the Ankr Hub. The Hub is responsible for relaying and dispatching tasks to working clusters.

The Ankr team wants to utilize DCCN to offer an experience like that of centralized computing platforms. Through its Graphic User Interface and Command Line Interface, users can deploy apps, services, or even infrastructure for supporting such.

A Resource Scheduler on Ankr selects and assigns tasks to nodes, who will then run them in the desired state. The scheduler will utilize the Weighted Dominant Resource Fairness Algorithm (WDRF), which evenly distributes the available resources to nodes depending on availability and the degree of urgency.

The SLSBFT and the standard BFT differ in that the former features Block Producer ‘BP’ nodes. BP nodes are selected based on their contribution to the network as well as their stake. This promotes decentralization and fairness in that not just large token holders can participate in the network, but any node that contributes positively. To protect the network against attacks, validator nodes are chosen in a random fashion.

The DCCN blockchain supports the functions of Ankr’s communication in several ways, which include:

Ankr utilizes an incentive mechanism to promote healthy development of the platform and provide users with high-level services. The rewards are measured based on several yardsticks, including:

ANKR is the native cryptocurrency of the Ankr platform. It’s the mechanism through which network users pay fees. Enterprise clients can pay for hosting fees via the token. Such enterprises could be crypto exchanges, staking platforms, fund management companies, etc. Individuals can also use the ANKR token to donate to non-profit Cloud computing platforms such as BOINC. And lastly, cloud service users can use ANKR to pay for the service.

The ANKR token was distributed in the following fashion:

Where to Buy and Store ANKR

Once you grab some ANKR, you can store it in any of several wallet options, including Trust Wallet, Atomic Wallet, MyEtherWallet, Trezor, and Ledger.