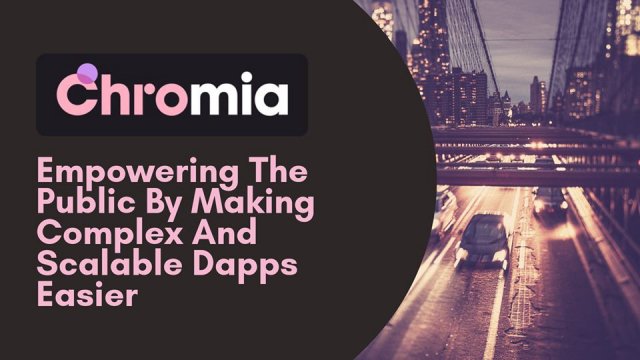 Decentralized applications (DApps) are key to the blockchain revolution. DApps are a new kind of applications that grants more control to users and are not beholden to an owner or any central authority. DApps are possible thanks to blockchain tech. Blockchain is synonymous with decentralization, advanced cryptographic security, and worldwide reach. This presents a ton of possibilities for developers everywhere.

Ethereum, often referred to as the second generation of blockchain, introduced the idea of decentralized applications. It showed the world that blockchain could be used for more than money. For this reason, the DApp space owes a ton of gratitude to Ethereum.

However, Ethereum is far from the perfect DApp platform. And this has implications for not just user experience, but also the DApp industry.

Chromia, formerly known as Chromapolis, is a blockchain effort wanting to improve the experience of DApp users. It takes the approach of a ‘relational’ blockchain to offer better security, scalability, and affordability.

In this guide, we’ll look at the Chromia project together with its platform token: CHR.

Chromia is a decentralized application platform that seeks to address the shortcomings of such platforms that came before it. Chromia wants to power a new generation of DApps that can scale further than current platforms can allow.

Existing platforms, such as Ethereum, started the game. Other DApp platforms have sprung up through the years, seeking to improve the developer and consumer experience one way or another. But Ethereum remains the most popular and the most go-to platform for developers. However, the platform has yet to sort out so many of the limitations that users experience on the platform – from high fees to slow confirmation times.

Things like these prevent DApps from going mainstream, and with it, the blockchain. The Chromia team believes that for DApps to go mainstream, the entire blockchain concept needs to be rethought. As such, it wants to create a platform that will power DApps to millions of users, improve user experience, and afford developers a more interactive and creative environment.

To achieve this, Chromia relies on what it calls the ‘relational ‘blockchain.’ The whole idea behind the relational blockchain is a solution that appeals to the real world, to the everyday user like you and me. Chromia expounds on the concept: “it is all about…combining blockchain into traditional databases creating something that people actually can relate to in an environment that people are familiar with and in language that everyone can learn.”

Ethereum broke ground with its support for decentralized applications. However, it faces several problems that hold back its ability to exploit this to the highest potential. DApp developers face the following problems:

The Chromia network aims to play the role of a shared database in the most optimized way possible. This database features the following:

Chromia is currently undertaking several projects to advance its brand. Let’s take a look at some of them.

‘Chromunity’ is the moniker the Chromia team has assigned to its loyal base of users. The Chromunity operates entirely on top of Chromia’s relational blockchain and is the project’s iteration of a social media platform. Unlike centralized social media platforms, Chromunity members can engage on their own terms, with complete control over their data and identities.

Mines of Dalarnia is an action-adventure game where you guide your avatar through multiple blocks of earth to discover a variety of cool minerals. You can even buy virtual real estate in the game.

Chromia’s Green Assets Wallet is the first-ever blockchain platform green bonds, which are bonds that are specifically for raising environmental safety funds. On the platform, bond issuers can carry out impact reporting and communicate their achievements to market investors. On their part, investors can access transparent data on-field results. The wallet is Chromia’s first enterprise decentralized application.

Chromia features an in-house block explorer that enables users to retrieve data from blocks on the blockchain fast. The explorer is powered by the network’s relational blockchain technology.

Chromia Vault enables users to manage their DApps and asset portfolio more safely and effectively – kind of in an ‘under one roof.’ It’s designed so that you can move from one application to another without logging out or canceling any transaction.

The Single Sign On is a feature that lets users log in without having to enter a password all the time. This, and without compromising on security.

CHR is the native cryptocurrency of the Chromia network. Users can use it in these ways:

CHR is currently an ERC-20 token, which means it can be stored in any Ethereum-compatible wallet. There are many great options, including MyEtherWallet, Guarda, Mist, Exodus, Edge, Trezor, and Ledger.

Chromia introduces the unique concept of a relational blockchain to solve the thorny issues plaguing existing DApp platforms. Even if that doesn’t reel users in, its exciting projects should do the trick. Chromia is one to watch.