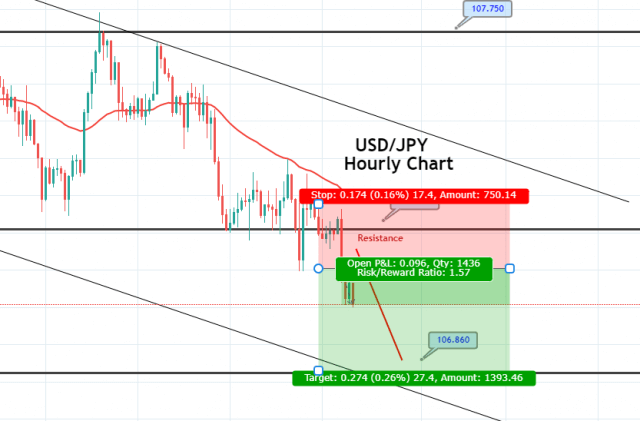 The USD/JPY failed to stop its Asian session early losses and took additional offers around below the mid-108.00 level. The risk-off market sentiment backed the move in the wake of the second wave of coronavirus, which eventually underpinned the safe-haven Japanese yen and contributed to the currency pair declines.

The Japanese yen gains could also be associated with upbeat reports about easing travel restrictions. However, the worries over the resurgence of the Covid-19 virus exerted bearish pressure on the risk sentiment and underpinned the safe-haven Japanese yen. As per the latest report, the U.S. cases crossed a total of 3.0 million marks and reported over 60,000 cases on Thursday.

Furthermore, over 12.2 million cases and 550,000 deaths globally were reported as of July 10, as per John Hopkins University data. Most of the states like Florida, Texas, and California, said a record-high number of new cases on Thursday. According to Goldman Sachs, hospital capacity in Arizona, Texas, and Florida has filled up by COVID-19 patients, and state officials are forced to consider additional measures.

As a result, the risk-off market sentiment is expected to extend into Europe, as witnessed by the S&P 500 futures’ sharp losses. However, the losses in the U.S. stock futures help boost the safe-haven bids for the safe-haven Japanese yen.

Apart from the Virus woes, the tussle between the U.K. and China over Beijing’s Hong Kong security law remained on the card but refrained from offering any further negative news.

At the USD front, the broad-based U.S. dollar succeeded in extending its previous session gains due to new coronavirus cases in the United States that further undermined the case for a quick economic recovery, which pushes the traders towards safe-haven assets. However, the U.S. dollar gains become a key factor that kept the lid on the pair’s additional losses.

As per the Kyodo news agency report, Japan has shown willingness to discuss ten countries and regions, including China, South Korea, and Taiwan, about easing travel restrictions. Whereas, the Japanese Prime Minister (PM) Shinzo Abe and Australian PM Scott Morrison talked yesterday via a virtual summit and showed readiness to accelerate preparations to resume limited travel among business people. This news also exerted some positive impact on the Japanese yen and contributed to the currency pair declines.

In the absence of the major data/events to be released on the day, the market traders will keep their eyes on the USD price dynamics and coronavirus headlines, which could play a key role in influencing the intraday momentum.


The USD/JPY was consolidating in a broad trading range of 107.800 to 107.250, which was finally violated during the Asian session. The pair is now holding at 106.850, and this is going to provide solid support to the USD/JPY pair for now. However, this level’s bearish breakout has a huge odds of driving more selling until 106.450 level today. At the moment, the pair is trading with a selling bias of above 106.850 support. Our trade got closed a bit early today, but we still secured 18 pips in it. Brace for next trades…