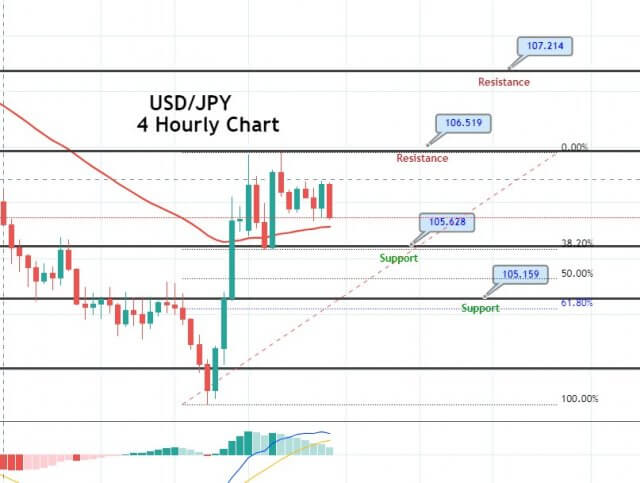 The USD/JPY currency pair successfully extended its early-day mild bullish moves and took bids around the 106.00 level, mainly due to the positive Asian equities, backed by the fresh optimism about the reopening U.S. states. The upbeat data from China and Japan also added further strength to the positive market tone, which initially undermined the Japanese yen and contributed to the currency pair gains.

Besides, the broad-based U.S. dollar weakness in the wake of the gloomy U.S. economic outlook capped further upside in the currency pair. The Japanese yen was unaffected by the upbeat July month Tokyo Consumer Price Index (CPI) data across the pond. At this particular time, the USD/JPY is trading at 105.96 and consolidating in the range between 105.83 and 106.19.

At the data front, Tokyo Core CPI rose by 0.2% expected and previous with 0.4% while the CPI Energy crossed 0.5% market expectations, and 0.4% last readings and flashed 0.6% in July. Despite the upbeat data, the yen didn’t take any bid from it, possibly in the wake of U.S. President Donald Trump’s fresh optimism about economic reopening, which caused the equity market’s uptick.

Despite the rising number of cases, U.S. President Donald Trump has decided to reopen the country and said in the White House press conference that the permanent lockdown was not a workable plan to fight COVID-19. As well as, he also gave hopes about the virus vaccine while saying that “we will likely have a coronavirus vaccine far in advance of the end of the year.” This fresh optimism challenged the risk-off market sentiment. In turn, this supported the equity market, which undermined the safe-haven Japanese yen and contributed to the pair gains.

However, the market trading sentiment seemed rather unaffected by the uncertainties over the much-awaited fiscal package. The House Speaker Nancy Pelosi signaled that no deal was in sight during this week. As well as, the fresh warning by the World Health Organization (WHO) President Dr. Tedros Adhanom Ghebreyesus that “there may never be a “silver bullet” to kill the coronavirus (COVID-19)” also failed to weigh on the risk sentiment, at least for now, which gave support to the currency pair by weakening the Yen currency.

The broad-based U.S. dollar failed to maintain its early-day mild gains, supported by the earlier U.S. welcome data. The U.S. dollar reported losses on the day as the United States was still facing virus woes and struggled to control the spread of coronavirus, which eventually destroyed hopes for a quick economic recovery.

At the UK-Japan front, the Japanese Foreign Minister Motegi recently crossed wires and said in a statement on the day that he will visit the U.K. from Aug 5-7 to discuss bilateral free trade deal. This positive news gave some support to the local currency (Japanese Yen) and capped currency pair’s gains. The market players will carefully follow the virus updates and U.S. fiscal news, which will entertain market players amid a light calendar.


The USD/JPY trades with a bullish sentiment around 105.950 level, having completed 61.8% Fibonacci retracement at 106.063. The pair is forming a bearish engulfing candle below 106.406 level, which worked as a support for USD/JPY in now it’s working as a resistance. On the higher side, next USD/JPY may find resistance at 106.650, while support stays at 105.250. The MACD and RSI both are suggesting bullish bias in USD/JPY pair today. Check out a trading plan below…