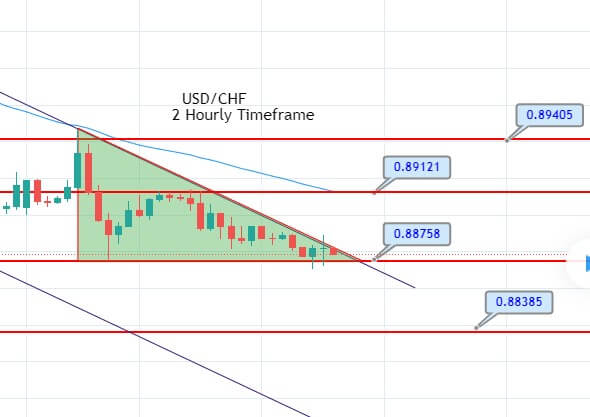 During Wednesday’s trading session, the USD/CHF currency pair failed to stop its previous-day bearish bias and remained pessimistic around below the 0.8900 level. However, the reason for the bearish tone around the currency pair could be associated with the broad-based U.S. dollar weakness. The U.S. dollar was being pressured by the optimism over the potential vaccine for the hazardous coronavirus infection, which urges investors to retreat from the safe-haven assets.

Apart from this, the U.S. dollar losses could also be attributed to the on-going concerns of further monetary easing by the U.S. Federal Reserve, which adds burden around the U.S. dollar and contributes to the currency pair losses. On the contrary, the upbeat market sentiment boosted investors’ confidence and undermined the safe-haven Swiss Franc, which, in turn, was seen as one of the leading factors that help the USD/CHF currency pair to limit its deeper losses. Currently, the USD/CHF currency pair is currently trading at 0.8879 and consolidating in the range between 0.8871 – 0.8897.

The equity market had been flashing green since the Asian session started. The reason could be associated with the major positive catalysts. Be it the renewed probabilities of the U.S. aid package or optimism over treatment for the highly infectious coronavirus, both factors have favored the market trading sentiment. Therefore, the risk-on market mood tends to undermine the safe-haven Swiss franc, which becomes the key factor that lends some support to the currency pair to ease the intraday bearish pressure surrounding the USD/CHF currency pair.

The hopes of potential vaccines were further boosted after the U.K.’s has started vaccination, witnessed after the 1st-patients inoculated with BNT162b2, the COVID-19 vaccine co-developed by Pfizer (NYSE: PFE) and BioNTech SE (F:22UAy). In addition to this, the sentiment around the equity market was improved further after House Speaker Nancy Pelosi told that the stimulus discussions had made good progress. Meanwhile, the U.S. Treasury Secretary Steve Mnuchin offers a larger amount than the previously highlighted $908 billion for the stimulus package.

At the USD front, the broad-based U.S. dollar failed to stop its bearish trend and remained depressed on the day as doubts persist over the U.S. economic recovery from COVID-19. Besides this, the risk-on market sentiment, backed by the optimism over a potential vaccine for the highly contagious coronavirus disease, also played its major role in undermining the safe-haven U.S. dollar. Besides this, the U.S. dollar losses could also be attributed to the concerns of further monetary easing by the U.S. Federal Reserve, which tends to undermine the American currency. However, the losses in the U.S. dollar becomes the key factor that kept the currency pair lower. Meantime, the U.S. Dollar Index, which tracks the greenback against a bucket of other currencies, dropped to 90.778.

Conversely, the optimism around the equity market was slightly unaffected by the intensifying market worries regarding the continuous surge in new coronavirus cases in the U.S. and Europe, which fueled the global economic recovery concerns imposing new lockdown restrictions on economic and social activity. Furthermore, the equity market gains were also capped by the lingering uncertainty over the Brexit deal and intensified China-US tussles over the U.S. sanctions on Chinese diplomats and the arrest of the Hong Kong opposition party members by police.

Moving ahead, the market traders will keep their eyes on the U.S. stimulus headlines and vaccine news. In the meantime, the updates surrounding the Brexit trade talks and the Sino-US tussle could not lose their importance on the day.

Technically, the USD/CHF pair is gaining support above the 0.8875 mark, and it’s triggered an upward wave to achieve a 23.6% Fibonacci retracement mark of 0.8935. On the further higher front, an upward movement and violation of 0.8933 mark can drive more buying trend unto next Fibo level of 61.8% at 0.8965. However, the pair has formed a descending triangle pattern which, if violated, can send the pair until the 0.8835 level. Check out a trading plan below.