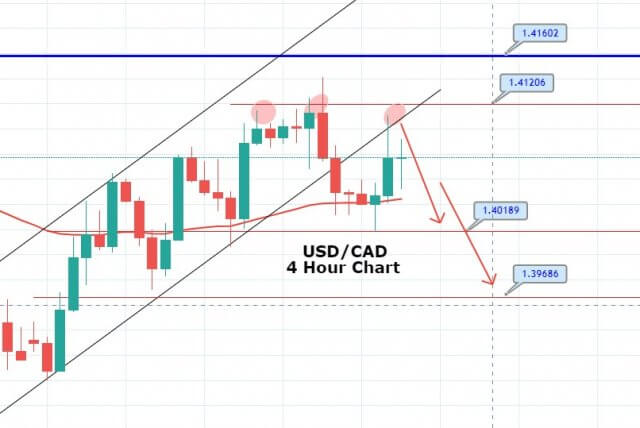 The USD/CAD pair was closed at 1.40460 after placing a high of 1.41406 and a low of 1.40318. Overall the movement of the USD/CAD pair remained bearish throughout the day. After posting gains for the last 3 days, the USD/CAD pair dropped on Thursday amid the increased demand for crude oil. WTI Crude Oil gained ground after the International Energy Agency (IEA) improved its oil demand outlook for 2020. Oil prices rose to $27.92 barrel on Thursday and gave strength to commodity-linked currency-Loonie.

Strong Canadian Dollar against the US dollar pulled the USD/CAD pair on Thursday to post losses after rising for the last three days. On the other side, the US dollar continued to get support from the increased fears in the market related to the second-wave of coronavirus after easing of lockdowns started throughout the globe.

Multiple Health experts have warned about the consequences for opening the economy too soon, saying that a hasty opening could lead to a bigger health crisis, which would ultimately lead to more economic damage.

The US Initial Jobless Claims last week showed a surge to 2.9M against the 2.5M expectations and weighed on the US dollar, which added in the downfall of USD/CAD prices on Thursday.

From the Canada side, at 17:30 GMT, the Manufacturing Sales for March was declined by -9.2% against the forecasted decline by -4.4% and weighed on the Canadian Dollar. Meanwhile, on Thursday, The Governor of Bank of Canada, Stephen Poloz, said that the better times for oil have come after seeing an unprecedented collapse by COVID-19 and a destructive price war between Russia and Saudi Arabia.

He said that the impact of recent oil price shock on Canada’s economy was similar to the crash in late 2014 and early 2015. He said that the improved outlook and prices of crude oil were still very far from where they were before COVID-19, and the significant risk in the shape of the virus was still there.

On the technical side, the USD/CAD is trading at a price of 1.4070, and the upward channel is violated, providing support to the USD/CAD pair at around 1.4110 level. On the 2 hour timeframe, the USD/CAD has closed shooting star below 1.4113 trading level. Below this 1.4113 level, we may see USD/CAD prices dipping further until 1.4018 level, especially due to improved crude oil prices. Conversely, a bullish breakout of 1.4112 level may lead to the USD/CAD pair towards 1.4164 level. Good luck!