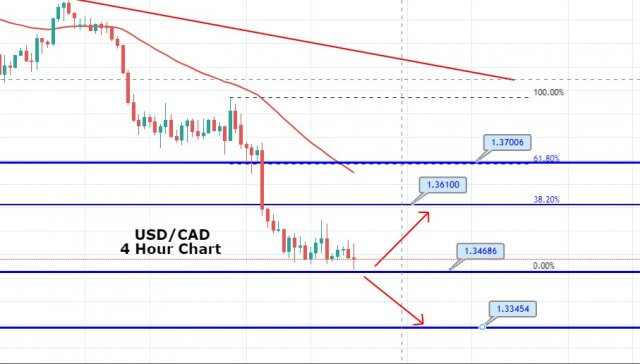 The USD/CAD was closed at 1.34942 after placing a high of 1.35722 and a low of 1.34798. Overall the movement of USD/CAD remained bearish throughout the day. The USD/CAD pair posted losses for the 3rd consecutive day on Wednesday amid the weakness on the US dollar due to risk-on market sentiment. The reopening of economies has boosted the expectations of faster economic recovery and provide confidence to the investors that central banks and governments were there to underpin the global economy.

The US Dollar Index, which measures the value of the US dollar against the basket of six currencies, fell to its lowest since mid-March at 97.19, which ultimately dragged the USD/CAD pair with itself.

Meanwhile, the Bank of Canada held its interest rates at 0.25%, which BoC said is as low as it will go. According to Bank, the Canadian economy appeared to have avoided the worst-case scenario of the COVID-19 pandemic.

The Bank also started a number of debt & bond-buying programs in order to make sure that there will be enough cash in the system. Bank announced on Wednesday that it was still buying government bonds to make sure banks have enough money to lend to creditworthy borrowers. Bank also stated that the measures taken to reduce the coronavirus crisis’s effect on improving market conditions were having their intended effect. The Bank said that it was ready to adjust these programs if the market conditions suggest so.

According to the Bank, the effect of coronavirus has likely peaked, and the expectations of second-quarter contraction could be 10-20% rather than the predictions made beforehand. On the US front, despite upbeat market data, the US dollar remained under pressure due to increased risk-on sentiment, which added in the downfall of the USD/CAD pair on Wednesday. On the crude oil front, the WTI Crude prices surged above $38 level and supported commodity-linked currency Loonie.


The negative figure of crude oil inventories from the United States as -2.1M rose Crude oil prices and helped Loonie to find traction in the market. The strong Loonie dragged the pair USD/CAD further, and hence pair dropped for the 3rd consecutive day. However, the upbeat economic data from the United States about the ADP Non-Farm Employment Change and ISM Non-Manufacturing PMI gave strength to the US dollar and kept a lid on additional losses of pair USD/CAD.

On the technical side, the USD/CAD is trading sideways within a narrow trading range of 1.3550 – 1.3485. Breakout of this range will drive further trends in the USD/CAD pair. The bearish breakout of 1.3485 support level can open up further room for selling until the next support area of the area of 1.3395. The bullish breakout of 1.3550 level can lead the USD/CAD prices to be higher until 1.3625 and 1.3700 level, which marks 38.2% and 61.8% Fibonacci retracement levels. Let’s keep an eye on 1.3485 level to stay bullish or bearish below this level today. Good luck!