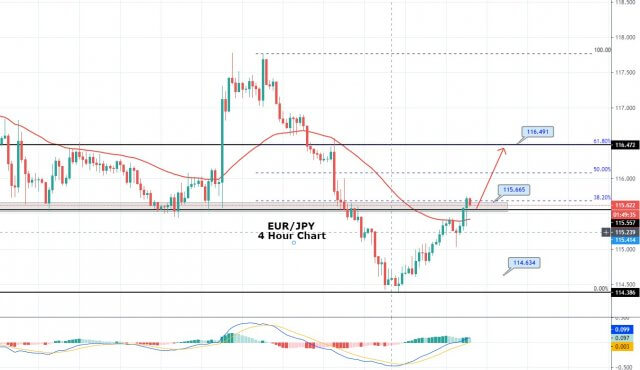 The Japanese cross EUR/JPY is on a bullish run, having crossed over 50 periods EMA at 115.551. As for the Japanese economic data is concerned, the Monetary Base for the year from Japan showed a decline to 2.3% against the expectations of 4.5% and weighed on JPY, which resulted in the upward movement of the EUR/JPY pair.

On the other hand, the uptick move from the major US equity indexes also made it difficult for JPY to gather any strength. On the last day of the week, the traders keeping their eyes on Non-Farm Payrolls from the United States to further take hints about the US economy. Better than expected labor market is weakening the demand for safe-haven assets such as JPY itself.


Technically, the EUR/JPY pair has closed three white soldiers pattern on the two-hourly timeframes at 115.650. Besides, the crossover above 50 EMA is also supporting the bullish bias among traders and typically drives an upward trend in the market. Lastly, the MACD is also forming strong histograms over 0, supporting bullish bias. Closing of the candle above 115.550 can drive more buying in the EUR/JPY pair. Thus, we have taken a buying trade. Let’s see how it goes.