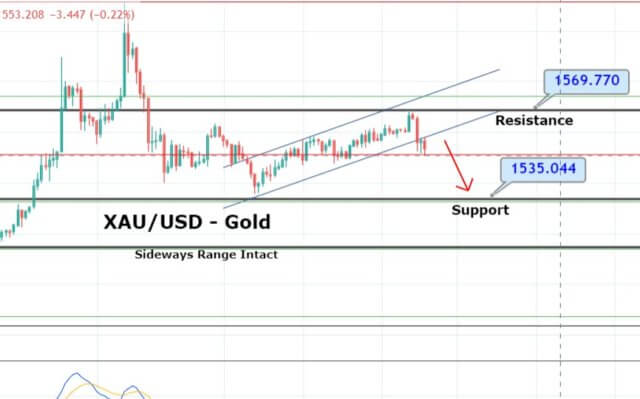 On Tuesday, gold prices inched up mainly due to the International Monetary Fund (IMF) report, which indicated a gloomy outlook for 2020. Gold traded 0.4% to $1,566.65 before falling to 1,555 during the European session.

The IMF decreased its forecast for global growth this year to 3.3% from 3.4% in October. The estimates for the U.S. and Eurozone were both lowered by the same amount. This report sent the prices of the safe-haven metal higher point, whereas the equities to the lower positions.

On the other hand, the safe-haven metal also got some support due to the risk-off market sentiment in the wake of the corona-virus outbreak in China.

Gold prices earlier boosted mainly due to the headlines regarding the China virus, which gained market attention. Because of the virus, four people were reported as dead in China, and an Australian man has also been recently tested for this human transmitted disease. As a precautionary measure, Wuhan has created a Wuhan Pneumonia control center to stop further spread of the disease. Meanwhile, he has also strongly suggested that markets and public transportation stations should be supervised strictly to prevent this virus from spreading further.

At the geopolitical front, unrest in Iraq during the weekend was also in focus, while it did not give any meaningful support to gold prices. At the USD front, the reason behind the greenback strength could be the rising expectations because of upbeat economic events that the economy of the United States will continue to expand.

On the 4 hour chart, gold has violated the bullish channel, which was supporting it around 1,553. Violation of this level can extend selling until 1,549. Besides that, gold has formed a bearish engulfing pattern is also suggesting chances of a bearish trend in the gold. The violation of 1,549 can open bearish bias until 1,544 today. Good luck!