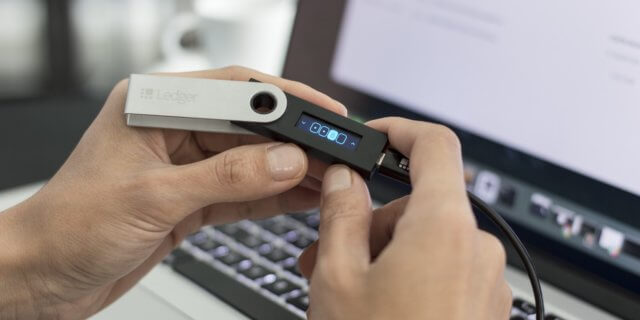 We will be looking at the unique operational and security features that endear Ledger Nano S to the crypto community. Additionally, we will vet its cost and fees, level of customer support offered by its developers, and compare its effectiveness against its competitors before telling you if it lives up to its reputation. Let’s start by looking at its key features:

Software wallet integration: The Ledger Nano S can be easily integrated with different other type software and smartphone-based wallet apps like the android based Mycelium or software-based wallets like electrum.

Buttons and a built-in display: The Ledger Nano S is a hardware wallet with two buttons and an inbuilt display screen. The two buttons come in handy when installing and configuring the disk as well as during transaction confirmation.

OS compatibility: Ledger Nano S hardware wallet is compatible with virtually all the most popular operating systems like Windows, Linux, and macOS.

Stores between 3-5 wallets: The ledger Nano S can support between 3 to 5 different crypto wallets at a go. This ideally implies that one can only create three different types of cryptocurrency accounts at a go. In a rather complicated workaround, however, Ledger Nano S users have claimed to be able to add more cryptocurrency accounts to their wallet by integrating wallet apps into the hardware wallet and later deleting the app from the wallet. By deleting the app, you leave the private coins in the wallet, but you will have to add the app every time you wish to transact.

Encryption: Ledger Nano S doesn’t just store your private keys; it also employs the highest grade of encryption to keep them as safe as possible.

Dual chips: The Ledger Nano S hardware wallet embraces the dual-chip technology and is currently fitted with the ST31H320 and STM32F042 chips. Once you store your private keys here, these chips sign the transactions separately as they are two different pieces of hardware, effectively adding another security layer around your coins.

Pin code: Like any other hardware or software wallet, you will have to set up the wallet access pin code. This is, in most cases, the first line of defense against illegal access to your private keys.

Offline configuration: Ledger Nano S features an inbuilt display that makes it possible to configure and setup the most sensitive aspects of your wallet’s security like the pin code and the generation of the recovery seed words offline.

Cold storage: The USB like device stores your crypto assets in a highly secure offline environment under a multilayered security system.

24-word recovery seed: when installing the device, the Ledger Nano S provides you with an offline auto-generated list of 24 words that you can use to reset your device if you forgot your pin code. You could use the recovery seed to access your private keys on another ledger Nano S wallet if the one you already have was stolen or compromised.

Ledger Nano S supports all the popular coins like BTC, Eth, BitcoinCash, Ripple, Litecoin, Dash, Dogecoin, Komodo, and ZCash. The hardware wallet company is also constantly increasing the number of supported devices and currently lists 700+ that you can hold in a Ledger Nano S wallet.

The Ledger Nano S hardware wallet costs $59 (exclusive of VAT and shipping). There are no additional deposit or withdrawal fees.

Step 1: Ledger Nano S does not have an inbuilt battery; therefore, plug it into a computer using a USB cable to power it on.

Step 2: The device display will present you with an option of configuring new device or private keys recovery, use the buttons to choose the configuration. Proceed to set a 4-7 digit pin code, using the buttons to scroll up and down and confirming a number by pressing both buttons simultaneously.

Step 3: The device then presents you with the recovery seed, a string of 24 words. Write them down on a piece of paper and keep it safe as you will need it to access your private keys should you forget the pin or lose the device.

Step 5: Download and install the Ledger Live desktop app from Ledger’s website. It serves as the app companion for ledger wallets and can work well on your phone too.

Step 6: Use Ledger Live app to install different crypto wallets to your hardware keeping in mind that Ledger Nano S limited memory only allows for the installation of between 3 to 5 crypto wallets at a time.

To receive bitcoins from your other wallets or third parties, you need to first access your Ledger Live app:

Step 1: Say you want to receive bitcoins and already have a bitcoin account in your wallet. Start by scrolling through the device and find the B icon representing the Bitcoin account.

Step 2: Press both buttons to confirm the bitcoin account, and a wallet address will appear on the Ledger live app.

Step 3:  Send the wallet to the parties from whom you wish to receive bitcoins from

To send payments from your Ledger Nano S wallet, you still need to first access your Ledger Live app:

Step 1: Say you want to send Ethereum tokens. Scroll through the device and find the E icon symbolizing the Ethereum account.

Step 2: From the app, key in/copy-paste your receiver’s wallet address and the correct amount of Eth you wish to send

Step 3: Authorize the payout by long-pressing both buttons on your device simultaneously.

The fact that Ledger Nano S hosts a wide range of security features and has never recorded a single security breach incidence makes it superior to most software and hardware wallets. It, for instance, is more secure than most web-based and software wallets in the sense that all its coins are held offline. And hackers can’t compromise or steal the crypto assets held therein. Even if they gained access to the Ledger Live app login details, payouts could only be initiated by pressing the device buttons.

Compared to two of its fiercest competitors in the hardware wallet niche, KeepKey, and Trezor, Ledger Nano S leads the path when it comes to affordability, reputation, and security. KeepKey may have never experienced a security breach, but it will only support about 40 crypto coins and tokens against Ledger Nano’s 700+. Trezor, On the other hand, has been around for close to a decade and claims to support 1000+ coins and tokens. It, however, recently suffered a massive security breach that tainted its reputation and deflated the crypto community’s confidence in its products.

Ledger hardware wallet providers can also be said to be doing a better job in customer support than most other hardware wallet companies. On their customer support page, for instance, you get to check and download free hardware updates and check the status of different crypto apps. And while they don’t maintain phone support, you get to interact with their responsive teams on different social media platforms.

Verdict: Is the Ledger Nano S Wallet worth buying?

There is a reason why Ledger Nano S remains the most popular crypto hardware wallet while maintaining the highest sales records. It is feature-rich, relatively inexpensive, and beginner and friendly. More importantly, it uses a proprietary OS to secure its wallets and has never recorded a security breach. We hold the opinion that Ledger Nano is worth buying and one of the must-haves for every crypto trader.