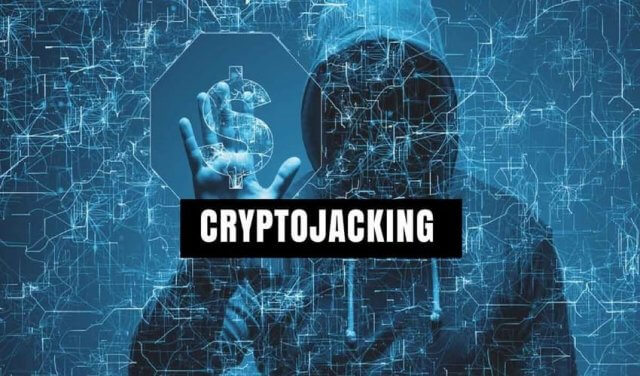 As cryptocurrencies grow in popularity and value, they continue to face cyber threats due to their internet-based nature. The most common threats are security breaches targeted at individuals and firms holding significant amounts of digital currencies.

Over the years, as crypto mining has become expensive but still lucrative, cryptojacking has become the latest threat facing virtual currency users.

Generally, cryptojacking is the unauthorized use of a computer, tablet, smartphone by a cybercriminal to mine cryptocurrencies. The process is pretty straightforward as all the hacker has to do is send you a malicious link or infect a website with malware. Once you open the link or the website, the malware auto-executes in your device and starts mining cryptos in the background.

The attack might also be targeted at a business’s cloud platform. By hacking into this platform, the cybercriminals tap into the computer resources resulting in increased cloud usage cost at the expense of the business or institution.

You might think that cryptojacking was rampant only in 2017 when the market was booming. On the contrary, recent data suggests that the practice has been on an upward trend even in the bearish market. The reason for this is that as the crypto-market turns bearish, mining doesn’t generate enough profits to cover the resources used. This has led cybercriminals to resort to siphoning computational power from unsuspecting victims as a cheaper and less risky alternative to earning returns.

Most of the cryptojacking is done using JavaScript miner, which is also used for legitimate mining. This means that a perpetrator doesn’t require high technical skills since the miner can easily be bought as a complete kit. What’s worse, it’s impossible to trace a miner to a particular hacker since the mining code doesn’t encrypt their data. This is especially true for anonymous cryptos such as Monero and Zcash, which makes it harder to trace cryptojacking activities.

How to Detect and Recover Cryptojacking

It may be hard to trace a cryptojacking hacker, but that doesn’t mean it is impossible to know if your device is compromised. All it takes is just paying attention to your device’s performance. So, here’s how to find out if your device has been infected with crypto mining scripts.

Cryptojacking codes tend to use a lot of electric power, causing your device to overheat. If left unresolved, overheating can damage other hardware, such as the storage drive leading to expensive repairs. Keep in mind that overheating doesn’t necessarily mean your device has been compromised. It can also be caused by unrelated issues such as a damaged fan or dust clog-up. So, ensure your device is always in good condition to make it easy to detect overheating caused by cryptojacking.

Cryptomining code slows down your device’s performance, as it overworks the Central Processing Unit (CPU). You’ll easily notice the lag when performing basic functions such as opening files or typing in details.

Alternatively, you can look at your CPU’s level of usage from the Task Manager tab on your PC or Activity Monitor on a Mac computer. If the CPU usage is higher than usual, then there’s a good chance that the cryptomining script is running in the background.

Making use of your device’s security software is one of the best ways of detecting cryptojacking scripts. Although not all scripts can be detected, scanning for these malicious scripts regularly can save you the damage. You should also ensure your security software is always up to date for effectiveness.

Additionally, if you own a website, it is advised that you scan for any changes in your code. This is where cybercriminals embed cryptojacking codes, so monitoring your site can help you detect threats early enough.

Cybercriminals are always improving and devising new ways of siphoning your device’s computational power. Staying on top of the latest trends will help you keep with the script’s improvements as you also learn how to detect them. You can get the latest news on cryptojacking from reliable sources such as CoinDesk, CryptoSlate, and other top cryptocurrency blogs.

Having known how to detect cryptojacking, it’s pretty easy to recover from it. If you are dealing with a JavaScript attack, your first response should be to kill all running tabs. In the same vein, you should uninstall any suspicious browser extensions. Also, blacklist the website from which the attack originated from. It’s also advised that you deploy anti-malware to avoid further attacks.

With this in mind, let’s look into how you can prevent cryptojacking in the first place.

Here are some preventative measures you should take to safeguard your device from cryptojacking:

Security training involves building awareness of what cryptojacking attacks look like. This method works perfectly in a business or institutional setting where there are many employees, some of whom aren’t aware of cryptojacking.

Essentially, the training should be aimed at educating employees on cybersecurity tips such as not clicking on phishing emails or suspicious sites, and downloading files from trusted sources only.

You may also consider training your IT team on how to identify various attack methods and necessary actions to take to mitigate the threats.

Disabling JavaScript when browsing online, can prevent cryptojacking scripts from running on your computing devices. You can disable it on a single page of a site or even within the entire website. Keeping in mind that JavaScript is widely used by most sites, you should expect some web features to fail to work.

Most of the cryptojacking scripts are found in web browsers and online sites. As such, installing trusted anti-cryptojacking extensions such as minerBlock and No Coin is an effective way of preventing cryptojacking. Ad-blockers can also help detect and block malicious scripts.

Cryptojacking is not only a threat to the digital currency community but also to everyone who has a computing device. Like any other cybersecurity threat, it is almost impossible to anticipate cryptojacking or even stop it from happening. The only sure way of dealing with these threats is through the early creation of awareness, detection, and prevention.