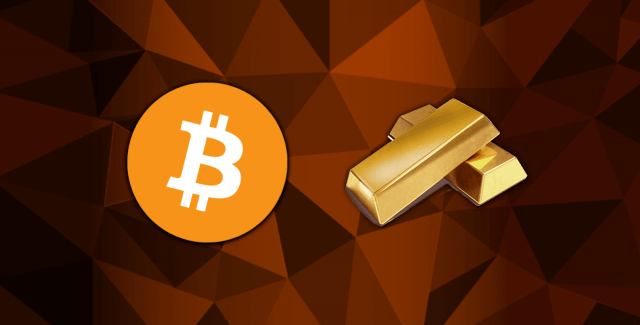 The most striking difference between gold and Bitcoin is that the former is a tangible asset. At the same time, the latter is an intangible digital asset that is created by computers crunching complex equations. From an investment perspective, gold is regarded as a ‘safe haven’ asset given its long history as an alternative investment for hedging against stock market volatility. Also, the increasing ownership of gold by central banks and governments further validates its ‘safe haven’ status as a reliable store of value.

Bitcoin, on the other hand, is a new entry into the asset market. It made headlines in 2017 when it traded at an all-time high price of $20,000. Since then, it’s the market price has been swinging violently, which explains why it’s considered a speculative investment. Although Bitcoin’s outsized volatility usually scares off investors, it has contributed to the increase in the value of the digital asset in the long haul.

That said, in a digital economy, hoarding piles of gold bars as a store of value can be overly cumbersome. As such, many investors are concerned about their long-term wealth and are mulling over investing in Bitcoin – a virtual currency whose future looks promising in the era of the digital economy.

Fundamental differences between Gold and Bitcoin

Besides the physical-digital difference, other key distinguishing features need to be examined before investing in either gold or Bitcoin. These include:

i) Supply and demand

As with most assets, the value of gold and Bitcoin is tied to their supply and demand. The higher the supply, the lower the demand, leading to lower market prices/value.

For starters, it’s hard to know the exact supply of all the gold in the world. However, if one were to draw a graphical representation of gold’s supply, one would notice a gradual increase in gold’s market supply over the years. With this in mind, we can deduce that gold’s price will decline at some point due to low demand. Also, owing to its unknown supply, the price of gold is prone to sneaky inflations. With Bitcoin, it’s a different case.

A well-known characteristic of Bitcoin is that its supply is capped at a known value – 21 million Bitcoins. So far, there are about 17 million Bitcoins in the market. This is to say that its supply will decrease over time, driving up its demand. Consequently, Bitcoin’s price will increase. Also, a fixed supply means that Bitcoin can’t bend to inflationary pressures associated with overproduction. Additionally, as modern commerce becomes more digitized, Bitcoin users will increase in equal measure, further increasing its value.

When investing in an asset for the long-term, it implies that you won’t liquidate it anytime soon. However, it would be best if you considered the asset’s market liquidity. This is especially true when you need to raise a high amount of cash, and the only way is to sell part of your entire investment.

Bitcoin, on the other hand, has a relatively high liquid market, making it easier to exchange any amount of Bitcoin for cash. The high liquidity is due to an increased number of exchanges with high trading volumes, in addition to other intermediary solutions such as Bitcoin ATMs and stablecoins. What’s better, Bitcoin can be liquidated in smaller amounts, of up to 8th decimal place, making it easy to liquidate just the right amount. Unfortunately, gold isn’t divisible into smaller amounts as those of Bitcoin’s magnitude.

Suppose there’s one area that gold triumphs over Bitcoin, is in reliability. For more 2,000+ years, gold was used as a medium of exchange. Even after the advent of money, it has managed to maintain a relatively stable value.

At one point in the long history of gold, the US government, under President Franklin Roosevelt, implemented measures to prohibit and criminalize the possession of gold. Even though the gold prices plunged following these drastic measures, trading and possession of gold increased significantly in subsequent years. If the same crackdown were placed on Bitcoin usage, it would put the digital currency at the end of the bench. Even worse, a change in consumer preferences or the advent of a new technological disruption has the potential to stunt the growth of Bitcoin ultimately. As such, gold being a natural resource will consistently hold its value for more years compared to Bitcoin, which is a dynamic human-made system.

Additionally, gold investment has proper regulation, while investment in Bitcoin is not regulated. This gives gold added legitimacy making it a preferred investment option.

Gold has several uses besides being a store of value. It can be used on luxury items like jewelry and even in electronic devices where it acts as a conductor. In some cases, gold coins are also used in place of fiat cash. Due to these real-world use cases, it has a more readily available market, which adds to its liquidity.

Bitcoin, having been in the market for just 11 years, is making quite plausible efforts to gain real-world use cases besides its position as a speculative investment. Infrastructures such as Merklized Abstract Syntax Trees ( MASTs), Taproot, and Schnoor signatures are pushing Bitcoin in the direction of real-world functionality in which it’ll contribute to the development of smart contracts. Moreover, it is anticipated that as Bitcoin usage increases in the incoming digital economy, its demand will rise relative to its mathematically metered supply. This will increase Bitcoin’s price and liquidity.

Conclusion: which one is Better?

Gold has been around for quite a long time and doesn’t show any clear sign of fading away from the market anytime soon. Its value will likely increase as various governments use it as a monetary reserve. The same can’t be said about Bitcoin since it’s still in its infancy stages. As we approach the digital economy, Bitcoin investors are bound to reap hugely. So, asking whether Bitcoin is a better long-term investment compared to gold isn’t entirely appropriate, as it is possible that the two can, and will, exist as complementary assets. As such, both Bitcoin and gold can fit in an investor’s long-term portfolio for diversification purposes.