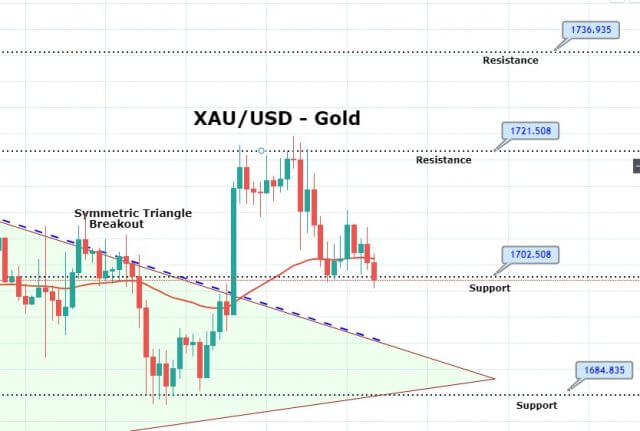 The safe-haven-metal prices flashing green and take bids around the $1,710 while representing 0.50% gains on the day mainly due to fresh allegations on China by the United States helping to increase the safe-have demand in the market. The Sino-US relationship was eased after both parties agreed to improve the atmosphere for fulfilling the phase-one deal’s promises. This came after President Donald Trump threatened new tariffs on Chinese goods in case of not buying $200 worth U.S. farm products by China.

The Consumer Credit for the month of March was released from the Federal Reserve of the U.S., which showed a decline by -12.0B against the expectations of positive 14.9B. This weighed on the U.S. dollar and limited the downfall of gold prices on Friday.

Furthermore, the latest economic data from the United States fueled expectations that the Federal Reserve will stimulate more in the next meeting, and markets started to price in for a negative interest rate environment. On Saturday, President Donald Trump said that the United States would purchase $3B worth of dairy & farm products in order to help the struggling U.S. farmers. He stated that the government’s purchase would be a part of “Farmers to Family Food Box.”

The demand for agricultural products was decreased due to the lockdown caused by the coronavirus pandemic, which started in March, and it has disrupted the supply chains across the nations. This has caused some U.S. farmers even to destroy their products, which they can’t store.  Donald Trump also said with no evidence that coronavirus pandemic will go away without a vaccine. He spared the specifics, said that other viruses also disappeared, and the same would happen with this COVID-19. He added that viruses die too like everything else, and he was hopeful that this virus would also go away after some time.

Gold is trading with a bearish bias, holding mostly below 1,710 resistance level. Gold is trying to cross below the 50 EMA support area, which can lead to gold prices further lower towards 1,694 level. Alongside, the RSI is also holding below 50, suggesting odds of selling bias in gold.

On the upper side, gold’s resistance is expected to be found near 1,720 and 1,737, whereas the support continues to stay around 1,694 regions. In case of a downward breakout, gold prices may slip towards 1,671 level.