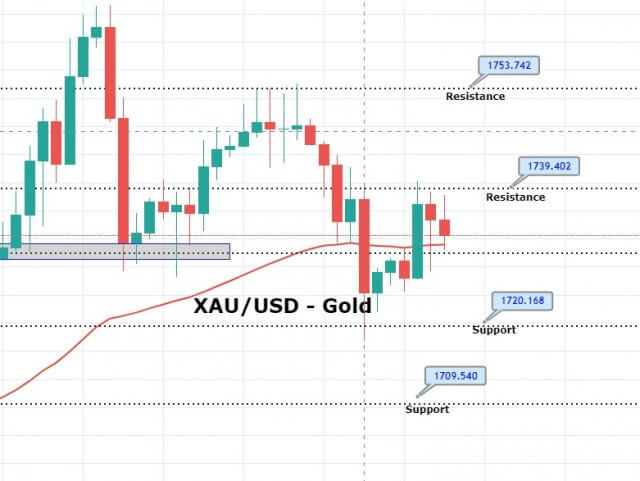 The safe-haven-metal prices regain its bullish traction and rose from a one-week low of $1,717.34 to $1,734.05, mainly due to the risk-off market sentiment in the wake of US-China intensified tussle and coronavirus (COVID-19) second wave fears. On the other hand, the U.S. dollar also draws safe-haven bids and managed to limit any additional gains in the gold prices. At this moment, the safe-haven-metal prices are currently trading at 1,734.97 and consolidating in the range between 1,724.50 and 1,735.55.

The reasons behind the gold pullback could be attributed to the tussle between the world’s top two economies, which was further bolstered by China’s indirect warning to the U.S., from the 13th National People’s Congress. As a Chinese speaker for the National People’s Congress, Zhang Yesui, said that China would strongly take its stand against the U.S. accuses and firmly defend its interest if the U.S. takes any action to ease the dragon nation’s core interests.

Apart from this, China’s ruling Communist Party has set a controversial national security law in motion for Hong Kong separation. This law would be able to ban foreign interference, terrorism, and external interference aimed at collapsing the central government, which eventually fueled concerns about a major US-China tussle and sent the gold prices higher.

On the other hand, fresh upticks in the yellow metal are also driven by the report that showed the Asian major dropped its economic growth target, 6-6.5% for GDP in 2019. This eventually increased the market uncertainty because the world’s 2nd biggest economy faced much disappointment from the GDP, which pushed investors into the safe-haven metal.

At the coronavirus front, the second wave of coronavirus kept the market risk sentiment under pressure and urged the global policymakers to rethink their reopening of the economies. However, U.S. President Donald Trump recently clearly said he would not shut down the economy during the second round of the virus.

The U.S. dollar continued to draw the haven demand on the back of the US-China tussle. As in result, investors turned to the safe-haven dollar, which kept the global stocks under pressure. Whereas, The U.S. Dollar Index that tracks the greenback against a basket of other currencies was up 0.19% to 199.593 by 11:44 PM ET (4:44 AM GMT). However, the U.S. dollar bullish bias turned out to be one of the major factors that kept a cover on any further gains in the gold prices.

As a result, the U.S. 10-year Treasury yields continued to report losses near 0.70%, while Japan’s NIKKEI struggled for direction around 20,560 by the press.

Looking ahead, the U.S. dollar price action and risk tone will continue to influence the gold trades. However, the near-term sentiment around the yellow-metal may remain strengthened by the huge stimulus announcing globally to control the virus’s impact.

Gold slipped sharply from 1,740 level to 1,717 support level, which was extended by the upward trendline on the 4-hour timeframe. Bullish trend continuation may drive buying until 1,745 level and even higher towards 1,754 level while bearish breakout of 1,717 can open further room for buying until 1,708 level. Odds of bullish bias remains strong today. Good luck!