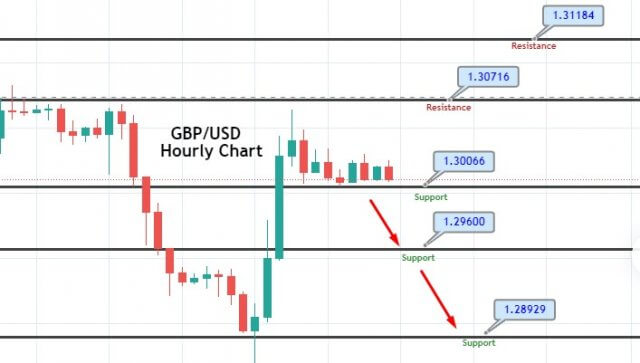 In the European trading session, the GBP/USD currency pair managed to stoop its previous session declining streak and refresh the intra-day high around mid-1.2900 level mainly due to easing fears of a no-deal Brexit, which initially underpinned the Pound and contributed to the currency pair gains. This was witnessed after the latest reports suggesting that the European Union leaders will be meeting in Brussels on Thursday and Friday to discuss Brexit and label progress in talks with the U.K.

On the other hand, the broad-based U.S. dollar fresh weakness, backed by the U.S. economic recovery worries, also played a major role in supporting the currency pair. Moreover, the U.S. dollar losses were further bolstered after the Bank of America Corp (N: BAC) reported a 15.8% drop in quarterly profit, which instantly raised extra doubts about the U.S. economic recovery pushed the U.S. dollar down. At a particular time, the GBP/USD currency pair is currently trading at 1.2978 and consolidating in the range between 1.2864 – 1.2980.

As we already mentioned, the GBP/USD currency pair witnessed strong progress over the last hours, in the wake of the latest Brexit headlines ahead of the critical meeting between the UK PM Boris Johnson and the E.U. Commission President Ursula von der Leyen later on Wednesday. As per the latest report, the 27 national leaders will tell their negotiators to extend conversations with the U.K. to reach an agreement from January 1, 2021. They will also decide to step up contingency preparations for an abrupt economic split without a deal to avoid tariffs or quotas. These positive headlines instantly underpinned the British Pound and pushed the currency pair higher.

Across the pond, the Bank of U.S. reported a 15.8% drop in quarterly profit on the day, hit by higher provisions for credit losses due to the COVID-19 pandemic, which in turn, adds burden around the broad-based U.S. dollar. Detail suggested, “Net income applicable to common shareholders dropped to $4.44 billion, or 51 cents per share, in the 3rd-quarter ended September 30, from $5.27 billion, or 56 cents per share, a year earlier.

Despite the risk-off market sentiment, the broad-based U.S. dollar failed to extend its long-day bullish rally and edged lower during the European session amid Bank of America profit falls on pandemic woes. On the other hand, the concerns about the ever-increasing number of coronavirus cases and weakness in the U.S. Consumer Price Index (CPI) also weighed on the broad-based U.S. dollar. However, the losses in the U.S. dollar kept the currency pair higher. Whereas the U.S. Dollar Index that tracks the greenback against a basket of other currencies down to 93.493.

On the contrary, the COVID-19 cases in the U.K. continue to pick up the pace as the U.K. reported the highest new cases since June on the previous day, with 143 deaths and 17,234 new confirmed cases. As in result, the opposition Labour Party ordered the national lockdown for at least two weeks. While considering the previous day’s downbeat employment data, the ruling Conservatives imposed local lockdowns. Hence, the renewed coronavirus worries became the key factor that kept the lid on any additional currency pair gains.