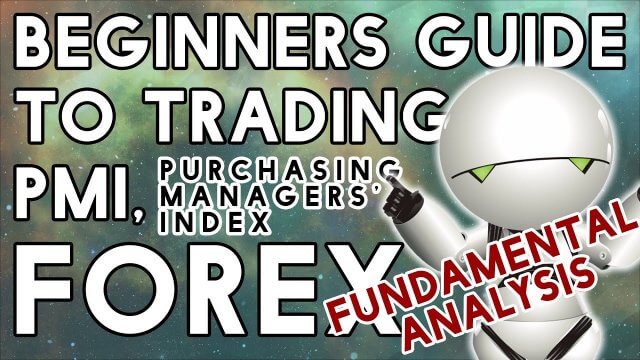 Welcome to the educational video on fundamental analysis, and this one is about, Markit manufacturing PMI.
The PMI element is the Purchasing Managers’ Index and is compiled by IHS Markit for over 40 major economies throughout the world. The information is updated month on month and released subject to an embargo at certain times, depending on the country. 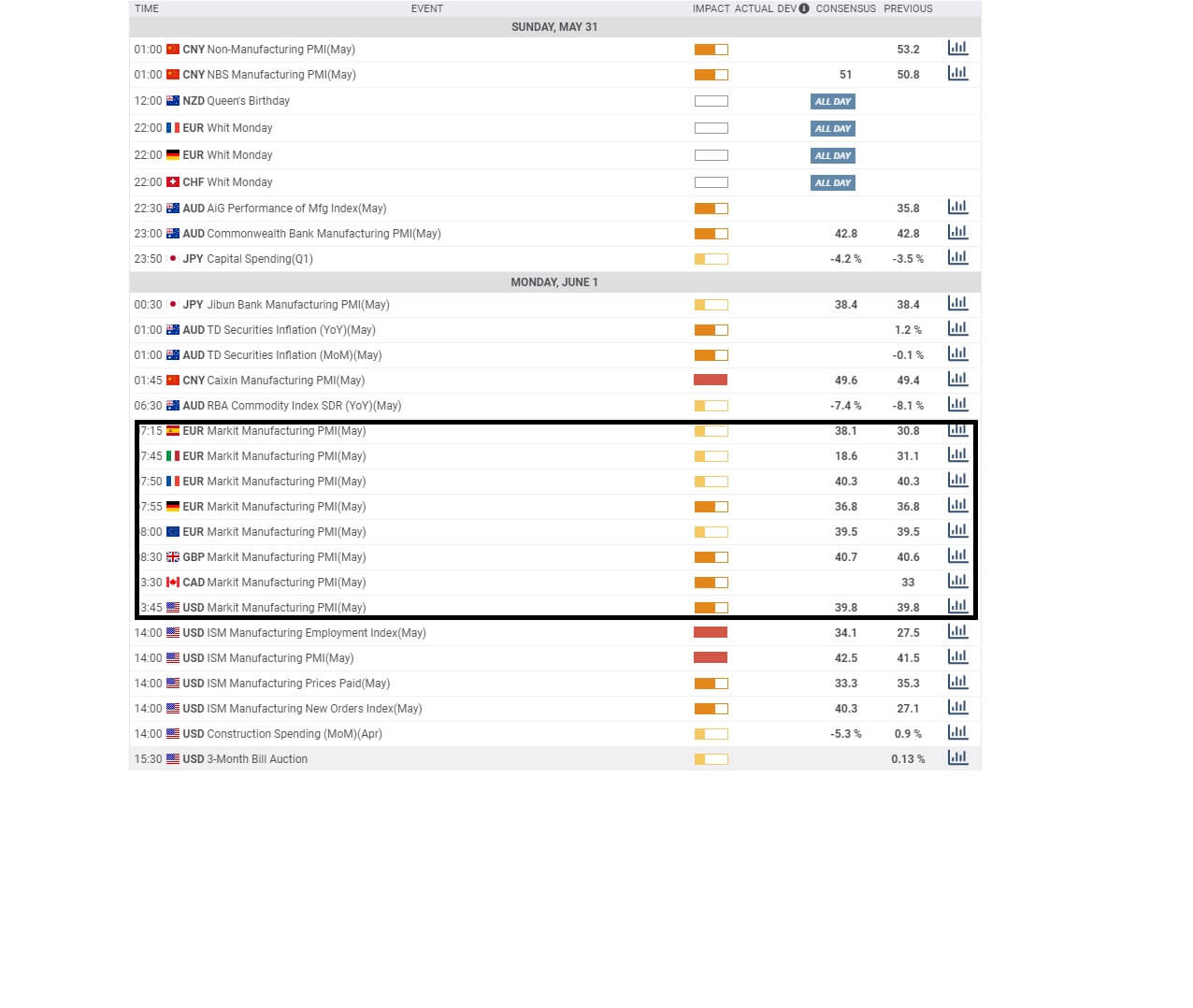 And so if you are keeping an eye on your economic calendar, you would expect to see something like this for Markit Manufacturing PMI’s. 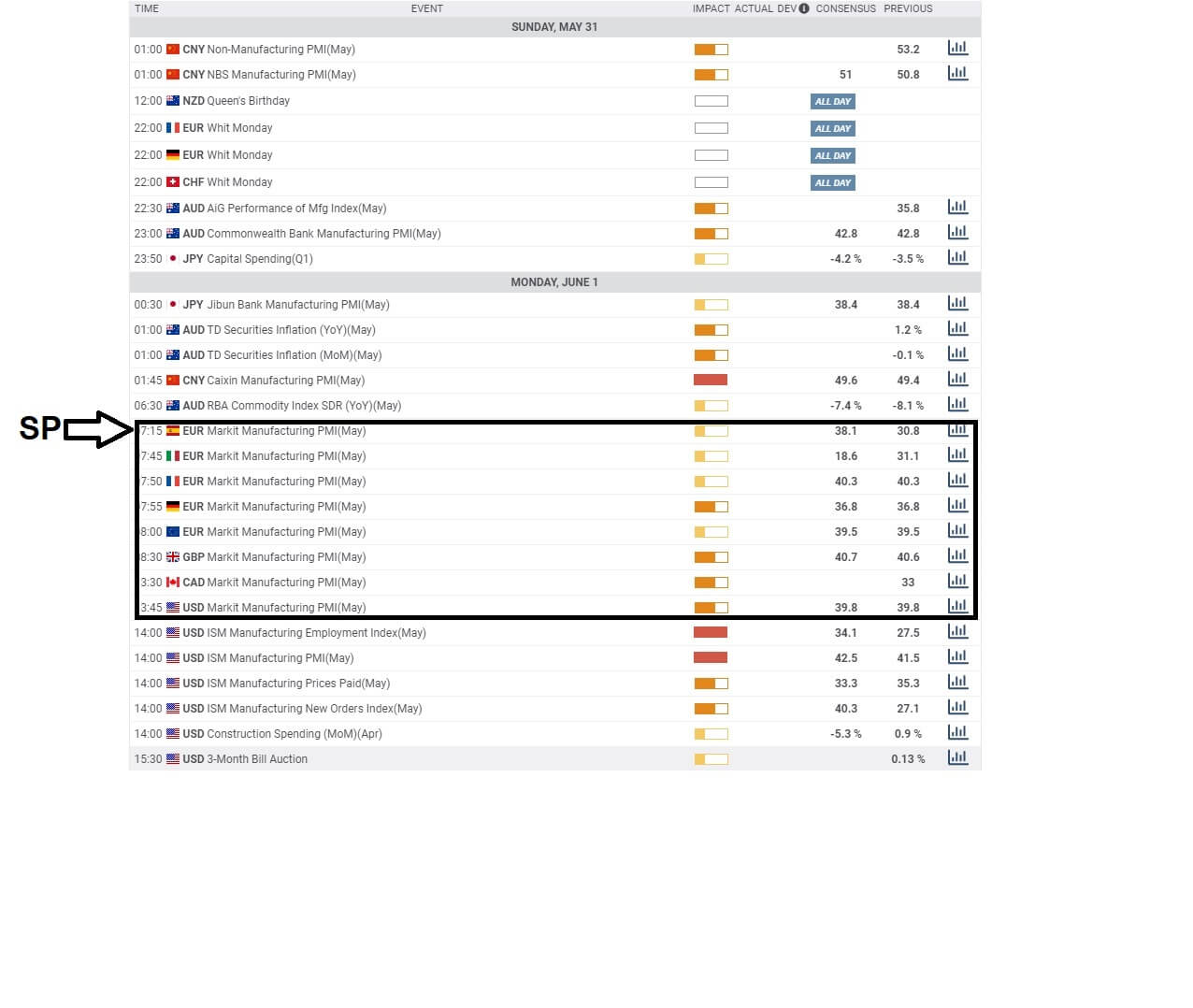 So the first one due on Monday, June 1st, is Spain. 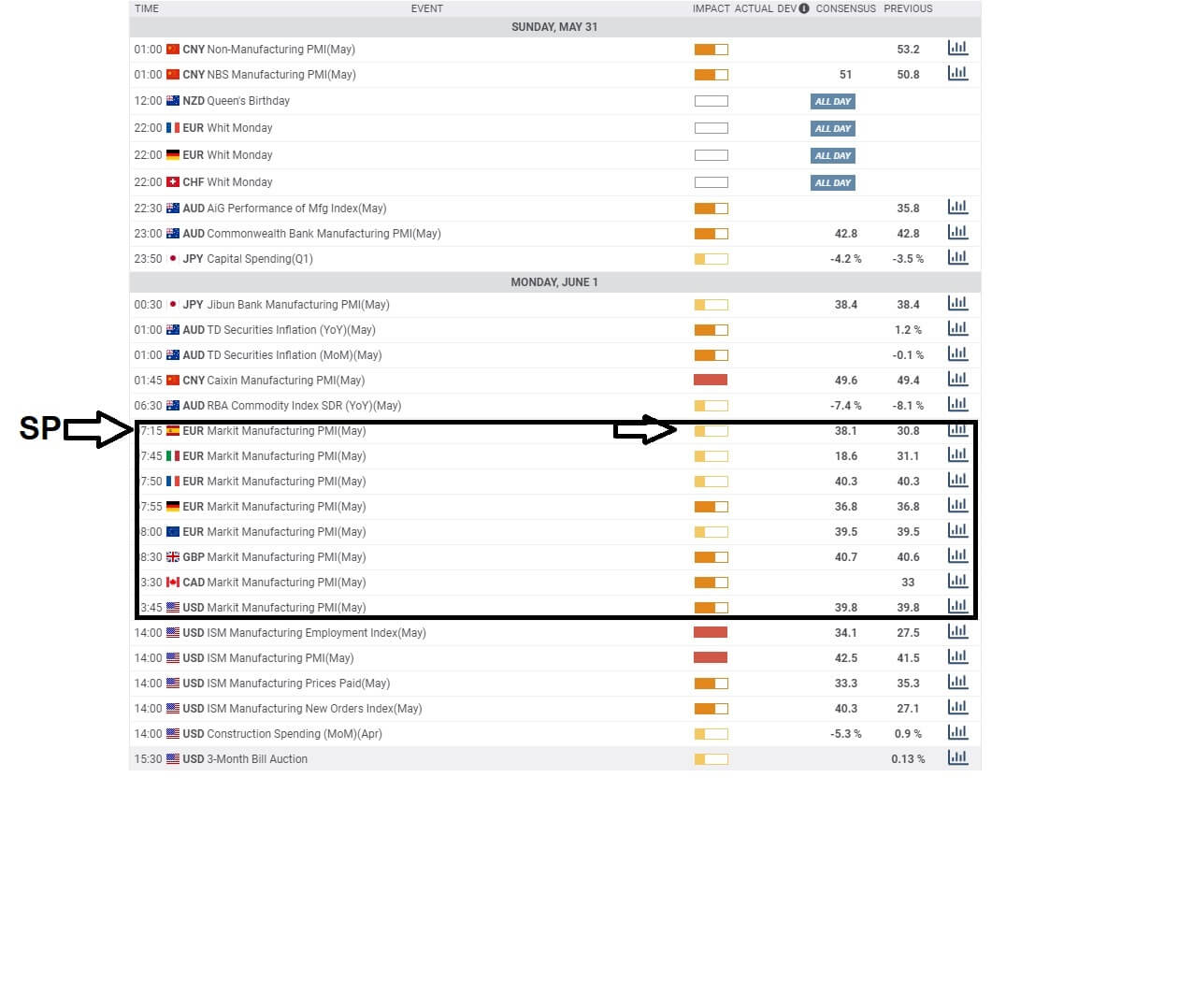 The bar on this type of calendar shows the impact the news release will have in the financial markets, pertaining to the economic conditions of the country and as a part of the Eurozone, where Spain shares the common currency. 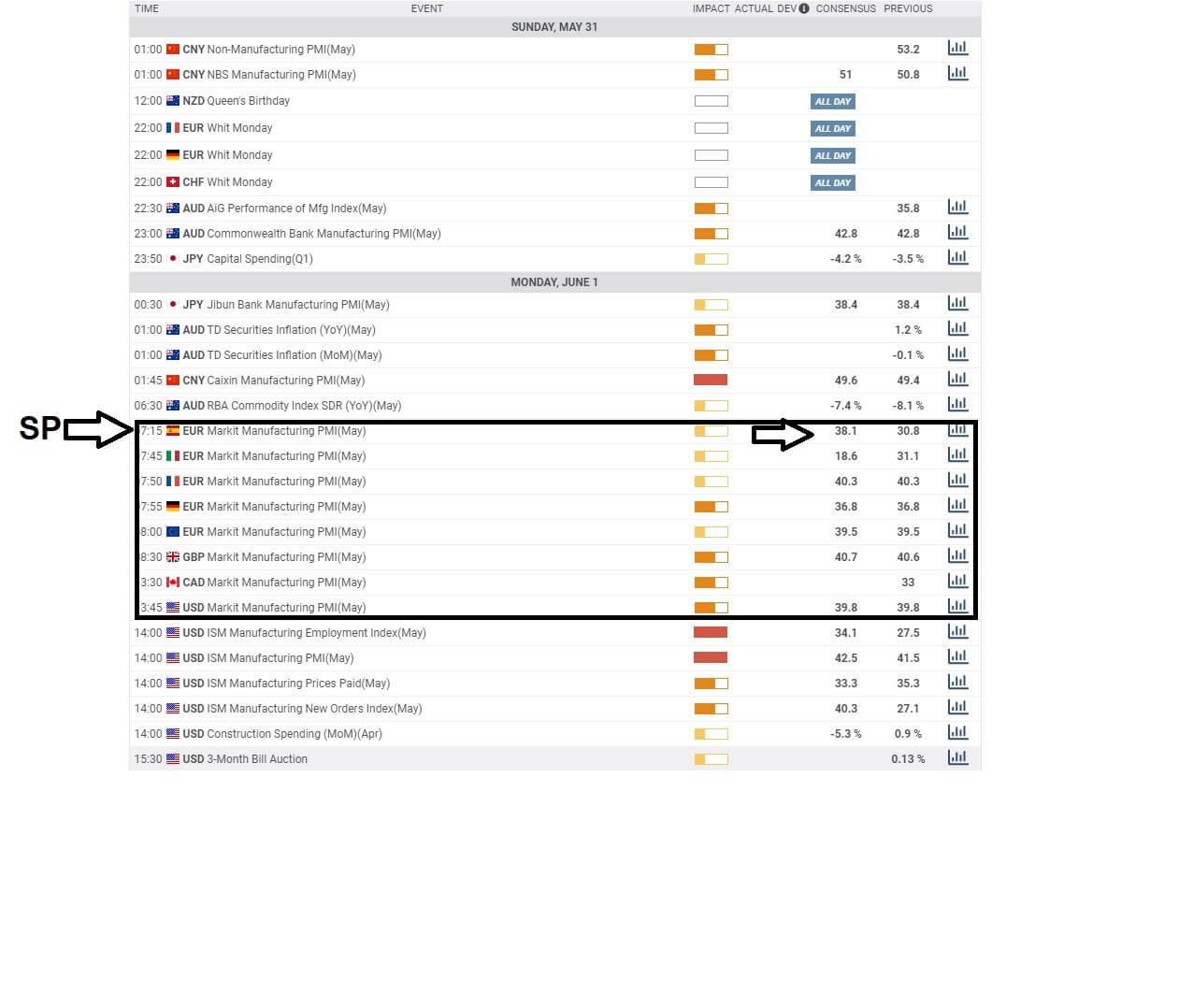 And then we have the previous month’s release, which was 30.8, the consensus by market analysts for this month’s figure, which is 38.1. 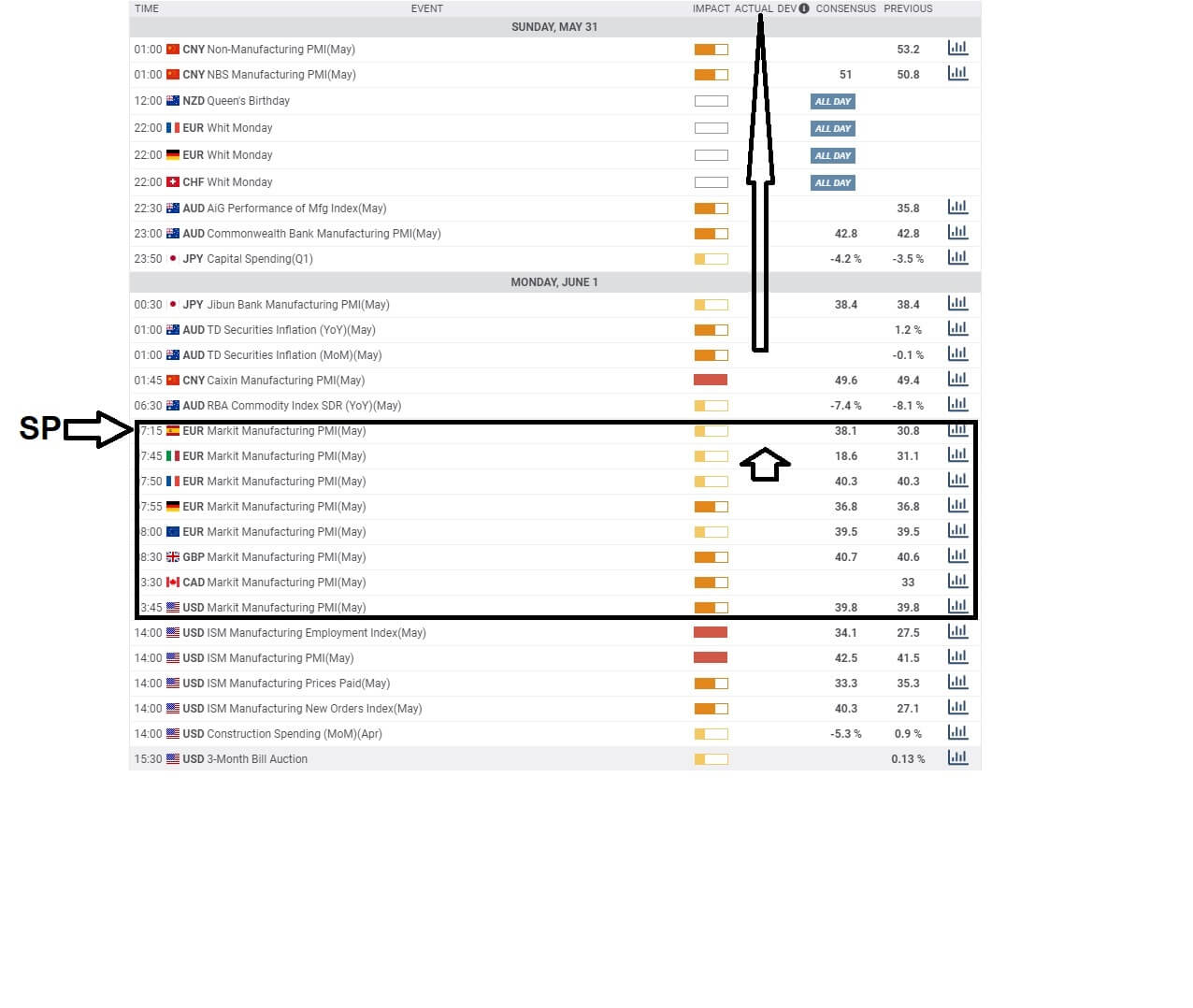 And when the figure is released at 7:15 a.m in Europe, the actual number will appear here.
The PMI, which stands for the purchasing managers index, is a snapshot of business conditions in the manufacturing sector for each country. Manufacturing is a huge component of a country’s gross domestic product, and therefore provides a picture of the overall economic conditions and financial health of a nation, in this case, Spain.

Generally speaking, a result above 50 signals bullish sentiment for the Euro, whereas a result below 50 is seen as bearish. Obviously, Spain is only one of 19 countries that use the Euro and one of 27 Eurozone member states, and because its economy is small in relation to some of the other country’s it has a lower impact. 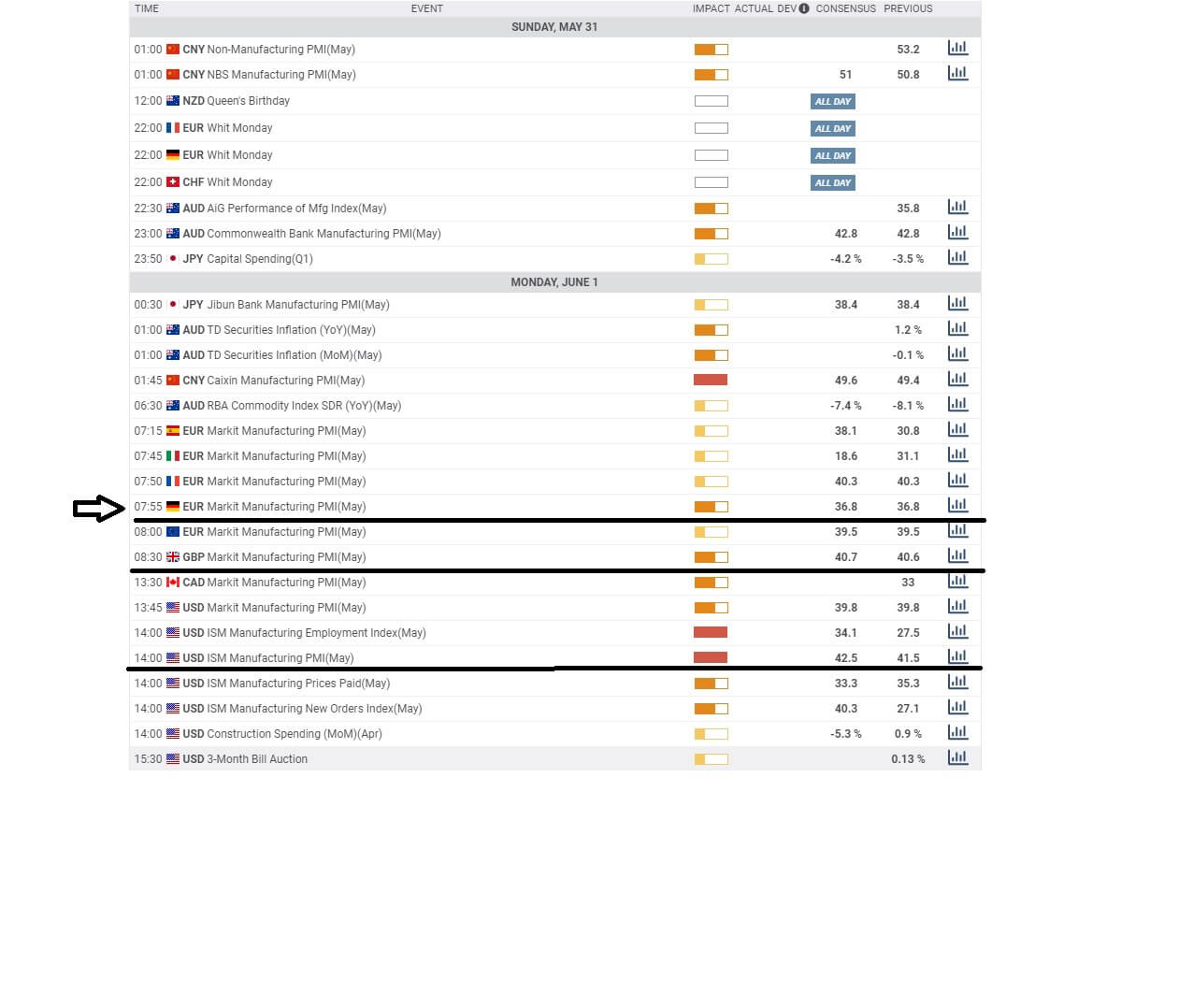 Here we can see that the impact bar is higher for Germany because it has a larger economy than Spain, and therefore its relevance is greater because Germany contributes more to the Eurozone coffers. 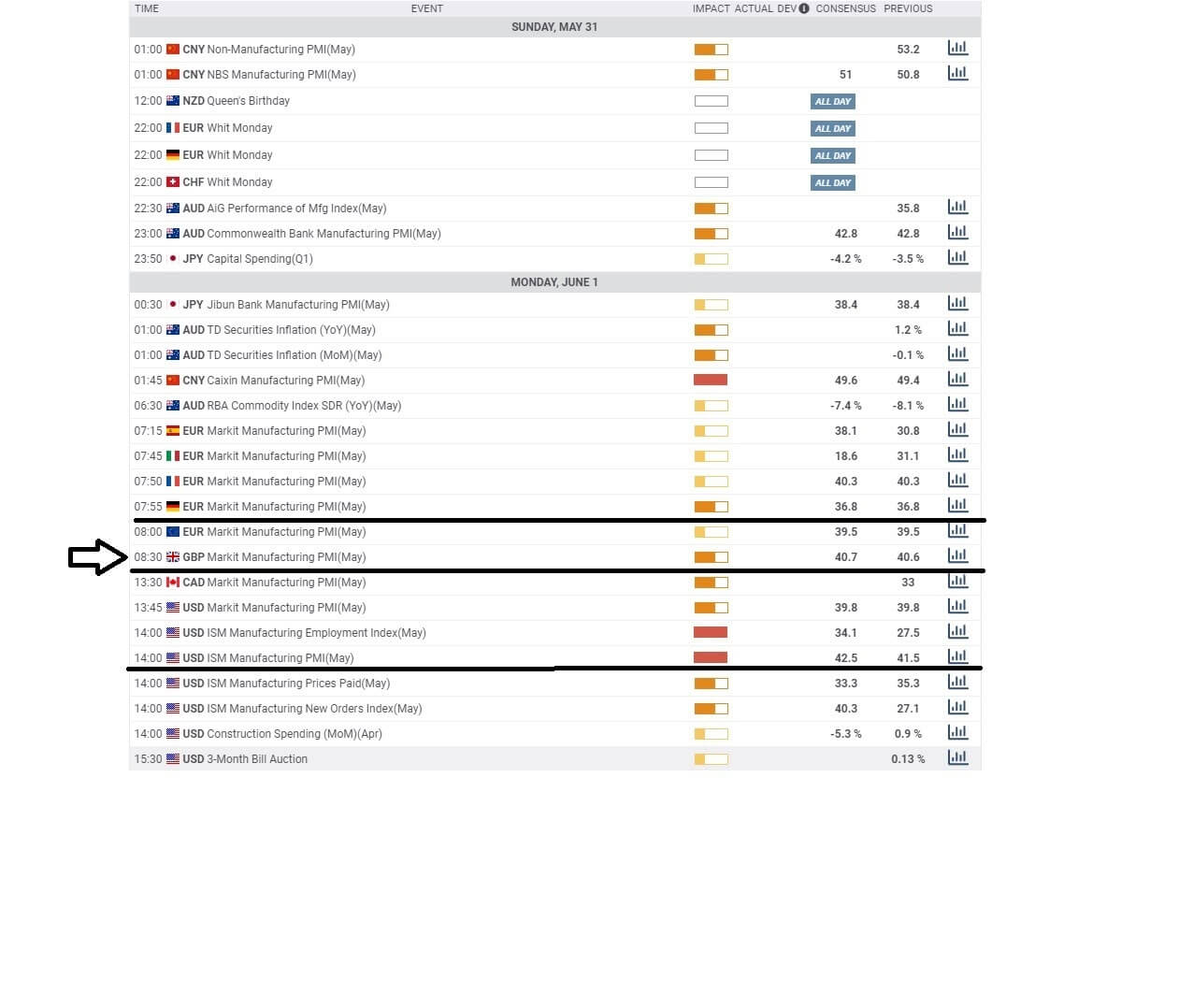 Similarly, the impact for Great Britain is of high importance. 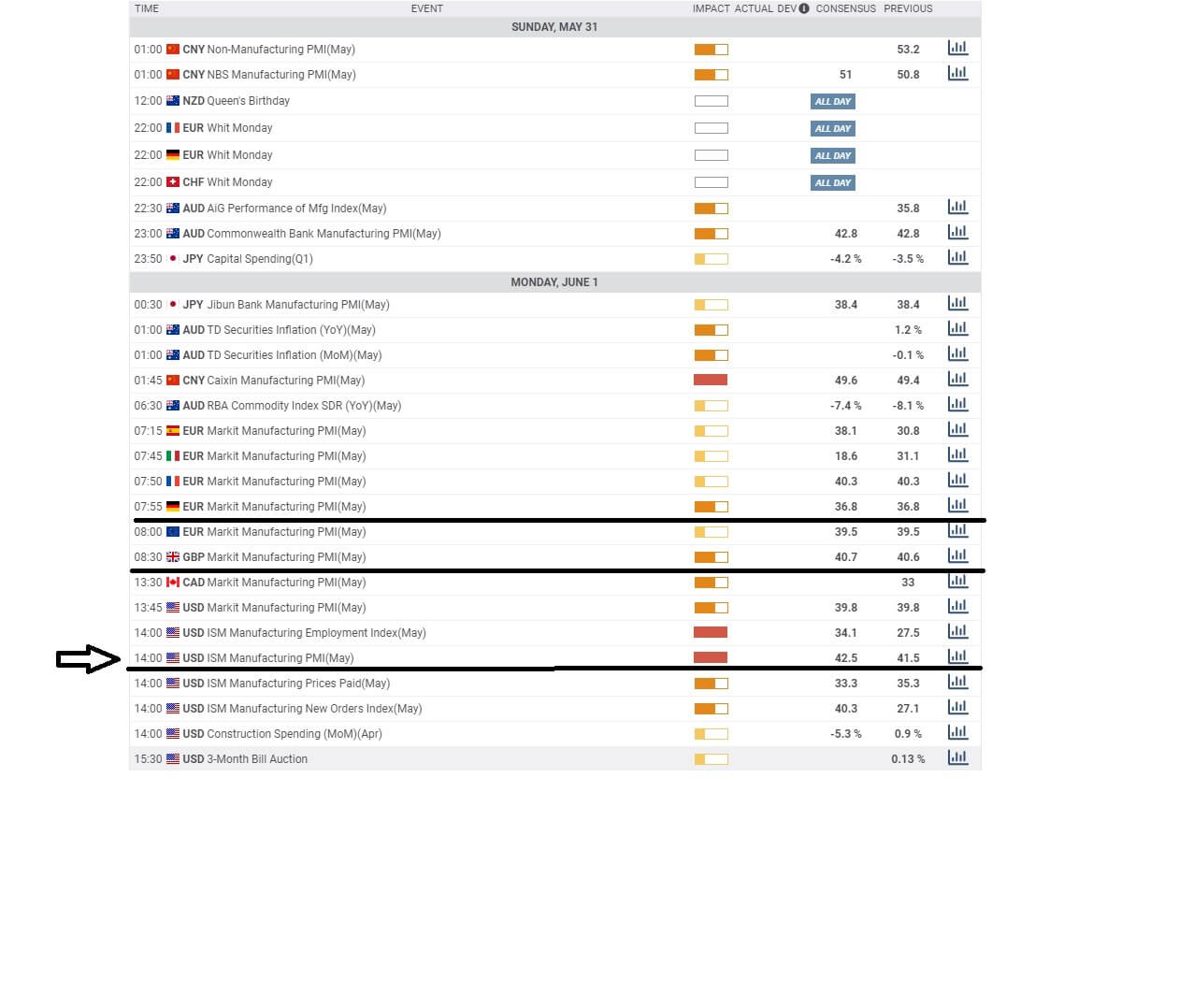 And when it comes to the United States, the PMI is very widely anticipated because it has a huge impact on the American economy and also because the US Dollar is the dominant currency in the world.
In the United States, this data is collated by a company called the Institute for Supply Management, or ISM and where they measure the manufacturing activity of more than 300 manufacturing firms across the USA, and where the monthly report, which is also referred to as the ISM Manufacturing Index, is announced on the first business day of each month, in line with most other countries, and where a reading below 50 suggests a contraction in manufacturing and where a number above 50 suggests expansion and where a reading of 50 means no change.

So how to trade the market manufacturing PMI and the ISM manufacturing index. Remember, we are looking for numbers above or below 50 and where above 50 is bullish and good for an economy, in which case you might expect to see a country’s currency exchange rate getting stronger. Conversely, numbers below 50 indicate a contraction in manufacturing for that country, and therefore this is a bearish number, and you might expect to see that country’s currency exchange rate move lower.

You will very likely find extreme volatility when the PMI numbers are released and are completely out of line with the market consensus. Markets do not like shocks, and when they occur, it creates market volatility.