Fundamental Analysis part 2 – How to Read the Markets

This section follows on from The Biggest Fundamental Events Analysis & Case Study. Shakespeare said that All the world is a stage. When it comes to the financial markets, everything is interwoven, from forex, commodities, including gold and oil, equities, treasury bills, corporate and government bonds, futures contracts, and, more recently bitcoin. In other words, in order to be able to read the Forex market, you must understand that all of the individual sectors play a role in your trading.
Trading can then be broken down into two categories: traders and investors. Subcategories include retail traders, who are typically day traders, where they open and close positions during the day with no overnight positions. But, there are also swing traders, who may hold a position from days to a couple of weeks, and then there are position traders (investors) who have a more long term view and may have open trades which run on for months, if not years. The latter will typically be large hedge funds, financial institutions, sovereign wealth funds, and governments. 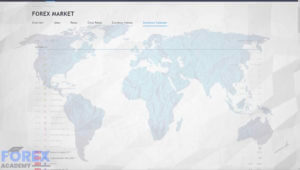 Therefore, position traders and investors tend to have a long-term approach and usually the financial clout to be able to weather the ups and downs and storms which prevail in the financial markets. A typical institutional investor might involve a trader who takes long term positions in the equity markets while managing retirement funds.

Here in the retail Forex market, traders typically range from scalpers, who prefer to be in and out of a trade within minutes, if not hours, and also day traders and swing traders.
All of this is fine, but what does it mean for a retail Forex trader? Well, it means that in order to be able to read the Forex market, it is highly advisable to know what is going on in other trading environments within the financial markets.

One way is to try and gauge the current sentiment, and there is an old adage in the trading community, which you will hear a lot of risk on and risk-off. This is dependent on the perceived risk of an asset – or a group of assets – by traders and investors.
So, when risk is seen as low, or risk-off, investors and traders seek higher-risk investments, such as stocks AKA equity investments, which will typically provide better returns.
And when the risk is seen as high or risk-on, traders and investors seek more lower-risk assets to invest in, such as selling assets, for example, equity portfolios, and moving into cash on deposit, or by buying treasury bonds AKA T-bills. This essentially means that retail forex traders need to up their game in order to be aware of how all these types of traders can very quickly liquidate positions in one market and jump into another.

Here are a couple more examples of risk-on: if the equity market is falling sharply and perhaps bond yields are low, traders tend to start buying gold and precious metals, which usually have less fluctuations, and are seen as a less long term risky asset. This has especially been true over the last couple of years, where prices have been overall moving higher. 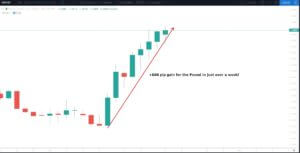 Another example would be with regard to all of the uncertainty surrounding Brexit during the last couple of years. And especially at the time of writing, where the pound has been extremely volatile – with huge swings and an overall gain of some 800 pips gain in Cable – as we can see in example A – which took place in the last few days alone. Therefore, some traders will have avoided trading the British pound and instead opted to buy the Yen or Swiss Franc via related currency pairs, and which tend to be seen as safe-haven investment assets in times of turbulence in the Forex market.
And a great example of risk-off would be when Donald Trump became President of the United States and where his policies regarding business were perceived by the US equity market as being conducive to growth in the US economy and where the equities market there and specifically the Dow Jones Industrial Average went on to one of the biggest rallies ever seen in a global stock market. 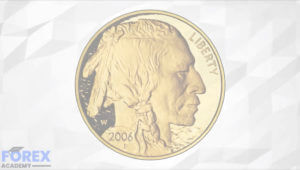 Here are a couple of examples where one asset class is heavily influenced by another asset class. For example, the Canadian dollar – which is also known as the Loonie – is heavily influenced by the price of oil. This is because Canada derives a large portion of its gross domestic policy from its production and subsequent sale of oil. And so with all of the current uncertainty in the global economy and signs of a slow down, the price of oil has declined over recent months, and the knock-on effect has resulted in the sluggish exchange rate of the Canadian dollar.
Another area is the continual spat between the United States and China regarding their trade deal negotiations, which have been running on and on. This has caused a slowdown in the commodities sector, and the knock-on effect here has caused problems for Australia who’s gross GDP is largely made up of their commodities exportation.

Another country which is suffering because of this ongoing trade war dispute is New Zealand, whose GDP is mostly derived from selling dairy products, meat, wood, and machinery into China.
Therefore, Forex traders have a responsibility to at least be mindful of what is going on in other markets, due to the fact that this risk-on and risk-off which goes on in the financial markets can cause sudden and extreme volatility in the Forex market, due to traders coming out of one asset and jumping into another.