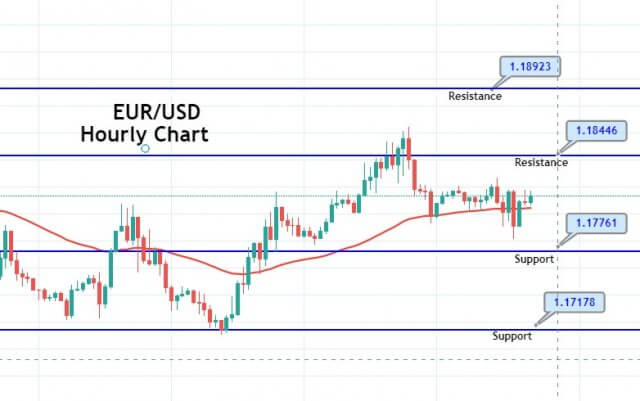 The EUR/USD remain depressive near 1.18 level, mainly due to the coronavirus latest report, which fueled fears that the economic recovery could halt once again. Despite the risk-off market sentiment in the Asian stock markets, the broad-based U.S. dollar struggled to draw safe-haven bids but failed at least now. In turn, the currency pair got helped to limit its deeper losses and hold above 1.18 level. The on-going U.S. Congress’s failure to reach an agreement for the country’s latest COVID-19 stimulus package also adds a burden to the greenback and helps currency pair. At the moment, the EUR/USD currency pair is currently trading at 1.1802 and consolidating in the range between 1.1791 – 1.1826.

The Cases increased by 1,449 in Germany on the day against Thursday’s +1,445. While the death count increased by 14, the tally showed. Considering the current situation of the virus in Europe, Germany’s Health Minister Jens Spahn said that they are very concerned about the surge in the coronavirus cases but assured that the health system would control everything. As in result, the shared currency weakened and contributed to the currency pair losses.

On the other hand, the on-going uncertainty surrounding the much-awaited U.S. fiscal stimulus or the second wave of coronavirus (COVID-19) adds burden on the broad-based U.S. dollar and capped further downside for the currency pair. The Democrats and Republicans are still struggling to approve an additional stimulus package as authorities hinted that additional stimulus is needed to control the recent wave of the coronavirus’s negative impact.

Despite Thursday’s upbeat U.S. jobs data, the broad-based U.S. dollar failed to gain any positive traction and edged lower on the day as doubts over the U.S. economic recovery remain amid coronavirus crisis. However, the losses in the U.S. dollar helped the currency pair to limit its deeper losses. Whereas, the U.S. Dollar Index that tracks the greenback against a basket of other currencies dropped 0.08% to 93.243.

Across the pond, the investor sentiment dampened once again by disappointing Chinese data released earlier in the day. At the data front, China’s industrial production increased by 4.8% over the previous year in July. At the same time, the output expanded for the 4th-straight month, against expectations for a 5.1% year-on-year rise. In the meantime, the retail sales fell 1.1%, worse than an expected 0.1% expansion.

The data overshadowed the optimism made by the deceleration in China’s factory deflation signaled by the producer price index released earlier this month and weakened the risk sentiment in the Asia markets. However, the risk-off market sentiment helped the U.S. dollar put the safe-haven bid and capped its deeper losses.

Moving on, the shared currency could face losses if the Eurozone Gross Domestic Product, which is scheduled to release at 09:00 GMT, shows a bigger-than-expected economic recession in the 2nd-quarter.

The EUR/USD is trading neutral on Friday, as traders seem to wait for major economic data to help drive a breakout. The bullish sentiment seems dominant as the EUR/USD pair trades at 1.1818 level, holding right below an immediate resistance level of 1.1820. Below this, the pair is likely to trade bearish until 1.1783 and 1.1745 level. Conversely, the bullish breakout of the 1.1820 level can lead the pair to be further higher until 1.1860 and the 1.1890 levels.