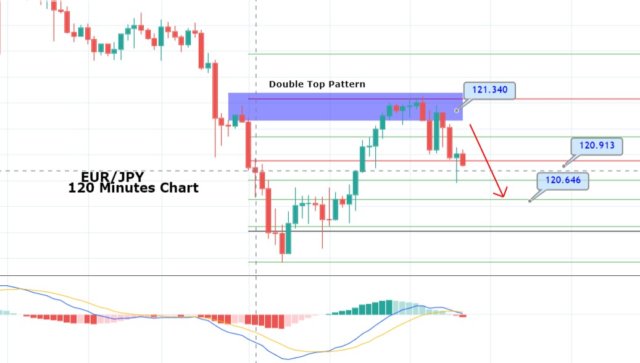 The EUR/JPY is trading with a bearish bias at 120.950 areas in the wake of the U.S. Iran trade war. Iran immediately called a parliament to decide whether US troops should remain in Iran soil or not. The parliament voted the US troop withdrawal from Iran, which was criticized by the US.

The US President Trump said that they had invested billions of dollars in building an airbase in Iran, and they would not leave until Iran pay them back. US army denied the troop withdrawal from Iran.
Iran then announced that it would no longer follow the 2015 nuclear contract with the world powers. According to that provision, Iran was bound to follow the uranium enrichment limits mentioned under the 2015 Nuclear Agreement.

In response to what, US President tweeted that Iran would never become a Nuclear Power. He then said that the US military would attack 52 Iranian Historical values if they make US troops to leave Iran. This has increased the geopolitical tensions throughout the globe and has increased the uncertainty as to which extent these countries could go further.

On the other hand, the FOMC meeting minutes for the December meeting were released on Sunday, which showed that US Fed policymakers were in favor of further easing. However, Federal Reserve has already announced that no further rate cuts would be made in 2020, and the interest rates will remain unchanged throughout the year.