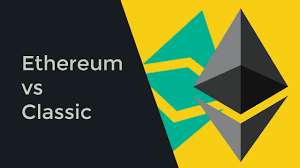 In broad strokes, Ethereum is an open software blockchain platform on which developers can build and deploy smart contracts and decentralized applications.

The formation of Ethereum and Ethereum Classic can be traced back to an organization called DAO, or the Decentralized Autonomous Organization.

DAO was an automated and decentralized organization. It was a sort of venture capital fund that ran without the organizational hierarchy that’s typical with normal organizations. DAO was going to fund DApps built on the Ethereum blockchain.

DAO was set up to give investors decision-making power over which potential DApp projects would receive funding. Investors would need to purchase DAO tokens – which gave them a stake in the DAO system. DAO tokens were purchased using Ether.

For a DApp to be green-lit for funding, it had to be whitelisted by ‘curators’ who were basically reputable figureheads in the Ethereum space. Next, the approved DApps would be voted on DAO investors – or the token holders. If the proposal received a 20% approval, it would receive funding, so it gets started.

This flexible process, together with the transparency and the overall potential of the DAO, was unprecedented, and scores of investors jumped in, hoping to get a piece of the action. In a record 28 days, the project had raised over $150 million of ether.

Of course, that was all fine and dandy, but what if an investor wanted to get out? What if an approved DApp did not exactly tickle your fancy, was there a way to opt out? As with anything blockchain, the DAO was a democratic process, so yes, there was a way out – called the “split function.”

Using this function, you could not only get back your ether, but you could also create your version of DAO known as “Child DAO.” If enough DAO token holders joined you, you could even start accepting your own proposals. The only condition was you had to hold out on spending your ether for the next 28 days.

But it was this same Split Function that brought DAO to its knees. It exposed a huge loophole in the system that could be manipulated by a bad actor. Many people pointed this out, but DAO creators brushed it aside as not a big issue. Except it was, and it was exploited, and the aftermath was the undesirable split of Ethereum into Ethereum and Ethereum and Ethereum Classic.

The Big and Bad DAO Attack

The reckoning came on June 17, 2016. A person, or persons, exploited the Split Function and managed to siphon $50m dollars. And because hindsight is 20/20, it’s very clear to see how straightforward the attack was, and how it could have easily been avoided.

Now, if one wanted to opt-out Of DAO, all they had to do was to submit a request. The Split Function would then do the following:

By the end of it all, $50 million worth of ether was transferred to a child DAO. As you can imagine, the entire Ethereum and DAO community was sent into a panicking frenzy after it was discovered what was going on.

Now’ it’s very important to point out that the attack took place courtesy to loopholes in the DAO and not Ethereum.

DAO ran on Ethereum, and DAO had issues. Ethereum was merely the host of the DAO.

Now after the attack happened, people naturally had questions about whether Ethereum and cryptocurrencies, in general, could be trusted. Even though Ethereum was not to blame, a lot of people couldn’t pick apart between it and DAO. Ether nosedived from $20 to $13.

Now despite the hacker executing the attack, they couldn’t get access to the funds since the DAO smart contract had enforced the 28-day rule – that you couldn’t spend the ether after exiting DAO. This gave the community three options moving forward:

After the fork, two completely different chains were born. The new chain went with the name Ethereum, or ETH. A section of the Ethereum community that was against the fork remained ‘loyal’ to the old chain, which in turn took up the name Ethereum Classic (ETC).

The fork enabled DAO to refund investors the money that had been taken away. For every 100 of DAO, DAO token holders would be given 1 ETH. This caused a sharp disagreement, which added more fuel to the Anti-Hard Fork drive and contributed to the formation of Ethereum Classic.

ETC vs. ETH – An Ideological Split

The Ethereum split came down to a difference in ideology. The people that stuck with the old chain believed that cryptocurrency is supposed to be resilient against the whimsical decisions of people. According to them, a hard fork was a sellout, a betrayal of what cryptocurrency stood for. If you were splitting the Ethereum blockchain, you were defeating the very purpose of its existence – to represent a non-corrupt finance system.

Because these two are a split of the same chain and given the contentious history between them, it’s only natural that comparisons will be drawn.

The biggest problem with ETC is that it is not backward compatible with the ETH hard fork. Also, the movers and shakers of the Ethereum community went with the new chain. This means users of the old chain will not have access to any updates on the new chain, like the upcoming move from Proof of Work to Proof of Stake.

For ETH, the issue is the new chain violated the “code is law” principle. There is also the glaring question of: how can we know the chain will not be capriciously hard forked again in the future? Are there already hard forks forming different versions of ETH? Even though the latter is conspiracy theories, it creates a climate of distrust in the public, which could lead to a devaluation of the coin.

Having said that, let’s look at the pros and cons of each cryptocurrency:

How Do ETH and ETC Stack Up in the Market?

In the never-ending ETC vs. ETH competition, ETH always comes out the winner as the vast majority of Ethereum developers, users and supporters have stuck by its side. ETH may have violated some blockchain principles, but the community bundled together and made something great out of the absolute disaster that was the DAO hack. That is a victory it will always have up in its notch.

ETC, on the other hand, remains stained by the DAO attack, and the argument that it’s held together by sympathizers, blockchain loyalists, and pure market speculation.

What’s for certain is that both chains have their loyal bases, and each of them has clout that’s unique to them. As for the battle between them, the common phrase, “it’s not over yet,” applies.