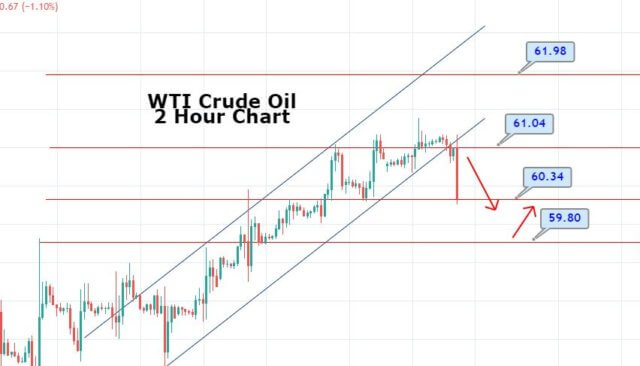 During the European session, the WTI crude oil prices were unchanged near the 3-months highs due to optimism surrounding the United States and China trade deal that has left an impact on the oil demand as well as the global economic growth outlook.

The WTI crude oil has dropped dramatically from 61.01 to 60.35 level upon the bearish breakout of the bullish channel and bearish fundamentals.

It should be noted that the improvement in an 18-months trade war between the United States and China, the world’s two biggest oil consumers, had raised expectations for higher energy demand next year.

China on Thursday declared a list of import tariff exemptions for six oil and chemical products from the United States, days after the world’s two largest economies announced an incomplete trade deal.

As a result, U.S. Oil is facing intense bearish pressure. What’s next? The technical side of the market is likely to extend support around 60.30, and below this, the black crack can drop until 59.65 support zone.

The RSI and MACD have entered the selling zone, and demonstrate strong bearish bias among traders. As we can also see, the upward channel which supported the oil around 61 has already been violated, and now 61 is likely to work as resistance for crude oil. Consider trading bearish below 60.74 today and buying above 59.65. All the best!