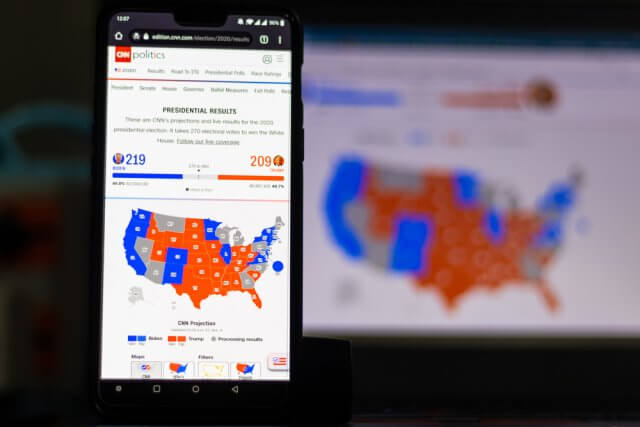 On the news front, the eyes will remain on the outcome of the U.S. elections, although Joe seems to be the next president of the United States considering the voting lead against Trump so far. Besides, the Monetary Policy decision from the Bank of England will remain in highlights. The BOE isn’t expected to make any changes in the policy; however, the press conference will be worth watching. The muted impact is expected on the news. Lastly, the Unemployment Claims from the U.S. may support the U.S. dollar today.

The EUR/USD pair was closed at 1.17227 after placing a high of 1.17706 and a low of 1.16025. After falling to its lowest since mid-July, the EUR/USD pair reversed and started to rise and ended Wednesday with gains. The EUR/USD pair has been having a highly volatile week so far as uncertainty around the U.S. 2020 Presidential Election intensifies. Results have been tighter than the market’s expectations, and investors felt hesitant to sell the safe-haven U.S. dollar.

On Wednesday, the U.S. dollar rally kept the EUR/USD pair under pressure and made it hard to sustain gains Wednesday as both share a negative correlation. Moreover, the Eurozone’s coronavirus situation also worsened as the pandemic’s second wave raised across the bloc and forced many major economies, including Germany and France, to re-introduce fresh restrictions and lockdown measures.

In turn, the ECB has been signaling that it could introduce a new monetary policy stimulus that only added in the weakness of Euro currency and kept the gains in EUR/USD pair limited on Wednesday.

From the U.S. side, at 18:15 GMT, the ADP Non-Farm Employment Change for October dropped to 365K against the estimated 650K and weighed on the U.S. dollar that added strength to the upward momentum of the EUR/SD pair. At 18:30 GMT, the Trade Balance from the U.S. for October came in line with the expectations of -63.9B. At 19:45 GMT, the Final Services PMI for October surged to 56.9 from the projected 56.0 and supported the U.S. dollar and capped further gains in EUR.USD pair.

At 20:00 GMT, the ISM Services PMI for October fell to 56.6 from the anticipated 57.4 and weighed on the U.S. dollar and provided support to the rising EUR/USD pair.

The U.S. dollar is a safe-haven currency that tends to rise during uncertain environment and in the U.S. 2020 Presidential Election, the fears that election result could be close or contested, it led to a rise in the safe-haven demand and the U.S. dollar, that ultimately added pressure on EUR/USD pair.

The EUR/USD is trading sideways, with a wide trading range of 1.1615 to 1.1760 area as the U.S. elections keep the markets on the move. On the lower side, the bearish breakout of the 1.1615 area can extend selling until the next support area of the 1.1591 level. The release of European services PMI data may support the pair; elsewhere, the outcome of elections may drive further market movement. The MACD is entering the selling zone, but we may not see further selling until the 1.1615 level gets violated.

The uncertainty surrounding the U.S. election results increased after the race to White House became tighter than anticipation. However, the results from key battle states like Wisconsin, Michigan, and Pennsylvania were delayed. This uncertainty forced investors to hold onto their U.S. dollar positions and weighed on GBP/USD pair.

On the previous day, the markets were moving on Biden recovery expectations, but as results from different states were announced, the election results became tighter. Chances for a divided government increased, and the blue wave decreased that raised the U.S. dollar onboard and weighed on GBP/USD pair.

In the U.K., the lawmakers approved a one-month lockdown for England as the coronavirus cases were continuously increasing. On Wednesday, the U.K. reported 25,177 new cases in a single day against Tuesday’s 20,018. The British Pound came under fresh pressure after these depressing highlights from the U.K. and added further losses in GBP/USD pair.

The Bank of England will release its monetary policy decision on Thursday. The uncertainty about the decision of BoE also increased with the escalated version of the coronavirus pandemic. The Bank is expected to keep rates stable, but as the lockdowns are re-introduced banks could change its decision and announce further easing. These uncertainties also kept the local currency under pressure and kept weighing on GBP/USD pair.

Just like the EUR/USD, the GBP/USD is also trading sideways in between a narrow trading range of 1.3122 – 1.2940 area. The Cable has recently violated the downward channel, supporting the GBP/USD pair around the 1.2940 level. Above this level, the odds of buying remain strong today. On the higher side, the Sterling may find next resistance around 1.3122 while the bearish breakout of 1.2940 may lead the Cable towards the 1.2855 level. A choppy session is expected today.

The USD/JPY pair was closed at 104.517 after placing a high of 105.343 and a low of 104.149. The USD/JPY pair moved upward towards its 11-days highest level on Wednesday but it lost most of its daily gains in the late trading session.

The primary driver of the USD/JPY pair was the USD’s market valuation on Wednesday. As the early election results showed that the blue wave was un-likely, it supported the safe-haven U.S. dollar and pushed the USD/JPY pair higher. The U.S. Dollar Index (DXY) also rose on Wednesday and moved to the 94.30 level.

As the markets were moving in previous days over the chances of Biden victory, after tighter election results, the chances for divided government increased and weighed on market sentiment. The hopes for larger stimulus also faded away with the declining hopes of the blue wave and the U.S. dollar gained through it and supported a strong bullish move on Wednesday.

However, on late night Tuesday, when it was clear that there will not be a winner, President Trump falsely claimed victory when millions of votes were still uncounted in the tight presidential race. This weighed on the U.S. dollar and the pair USD/JPY started to rise.

Meanwhile, the Bank of Japan released its monetary policy meeting of September on Wednesday that showed that some policymakers called for deeper scrutiny on how to address the fallout from the coronavirus pandemic as the economic outlook remained highly uncertain.

Many in the nine-member board agreed that it was sufficient to maintain the current ultra-loose monetary policy, for now, to cushion the economic blow from the pandemic. But some saw the need to debate how the BOJ could re-shape its policy in an era where the population must balance the need to contain the virus and sustain economic activity.

The Bank of Japan Governor Haruhiko Kuroda has said that the central bank’s focus will be on providing liquidity to cash-strapped firms hit by the pandemic. He has also indicated that deeper debate on how to achieve its 2 percent inflation target will be put on the back burner—these added strengths in the Japanese Yen and capped gains in the USD/JPY pair on Wednesday.