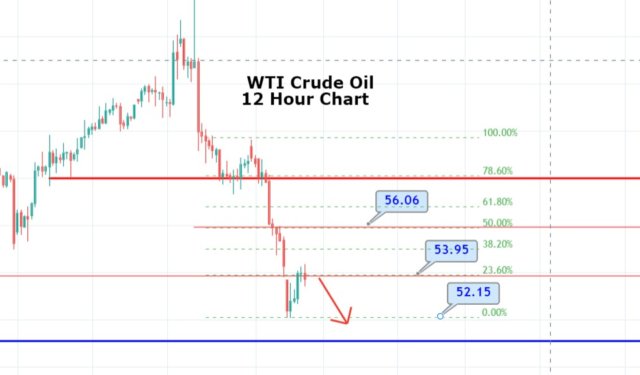 The WTI crude oil is trading with a bearish bias at 53.85 level, which marks the 23.6% Fibonacci retracement level. Most of the bullish recovering in oil prices came in response to the inventory report released by the API.

The inventories of U.S. crude sank dramatically during the previous week. The API posted a dip of 4.3 million for the week concluded Jan. 24 versus the build of 1.6 million announced last week.

The WTI crude oil prices grew 1.6% in response to the report in post-settlement trading. For now, the eyes will remain on the Energy Information Administration report, which is due at 10:30 AM ET Wednesday. The economists are expecting a build in crude stocks of 482,000.

The WTI finally dispensed some bullish momentum. However, it still lingers beneath 55.30. The leading technical indicators such as the RSI and Stochastics are in the oversold area, though it’s attempting to come out of the oversold territory.