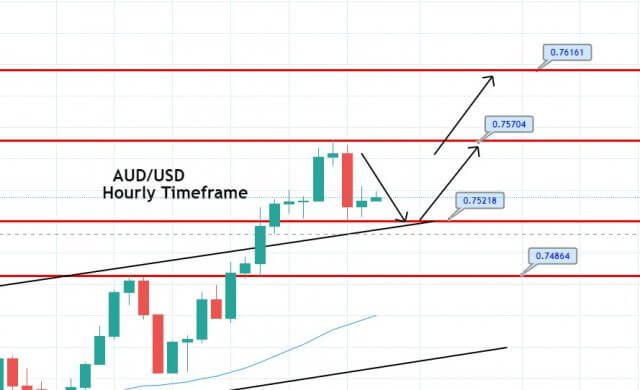 The AUD/USD pair was closed at 0.75350 after placing a high of 0.75296 and a low of 0.74254. The Australian Dollar rose to its highest level in two and a half year as investors started to bet on a successful vaccine roll-out and improving global growth. The risk-sensitive Aussie gained as much as 0.8% on Thursday and rose to its highest since June 2018 as the market’s risk sentiment improved. The pair AUD/USD has gained about 6.8% this year as a rebound in China’s economy has boosted China-proxy Australian Dollar demand.

The risk sentiment in the market was supported by the combination of multiple factors on Thursday and supported the upward trend in the Australian Dollar. The rising hopes for the US stimulus bill after the US Treasury Secretary Steven Mnuchin that a lot of progress has been made regarding the stimulus talks added in the risk sentiment. Meanwhile, the US House Speaker Nancy Pelosi also said that bipartisan negotiations on the coronavirus relief bill were making great progress. These comments reflected the upbeat market mood and supported the risk perceived Australian Dollar.

On the other hand, the US dollar was also weak on Thursday that also supported the upside momentum in AUD/USD pair. The US dollar weakness was driven by the increased unemployment claims and additional stimulus from ECB on Thursday.

At 05:00 GMT, the MI Inflation Expectations for November remain flat at 3.5% on the data front. From the US side, at 18:30 GMT, the CPI for November rose to 0.2% against the projected 0.1% and supported the US dollar. The Core CPI for November also increased to 0.2% against the forecasted 0.1% and supported the US dollar. The Unemployment Claims from last week raised to 853K against the anticipated 723K and weighed on the US dollar that added gains in AUD/USD pair. Furthermore, the hopes that the US FDA will approve within days using Pfizer’s vaccine also supported the risk sentiment in the market and gave strength to the risk perceived Aussie that ultimately added in the gains of AUD/USD pair.

The rising hopes for quick global economic growth also supported the market’s risk flows after the ECB announced on Thursday that it would expand its bond-buying program by nine months. It also raised the stimulus measure by 500 billion euros that will provide support to the Eurozone economy through the coronavirus pandemic. These updates also supported the risk-sensitive Aussie and helped the pair reach its multi-years highest level on Thursday above 0.7500.