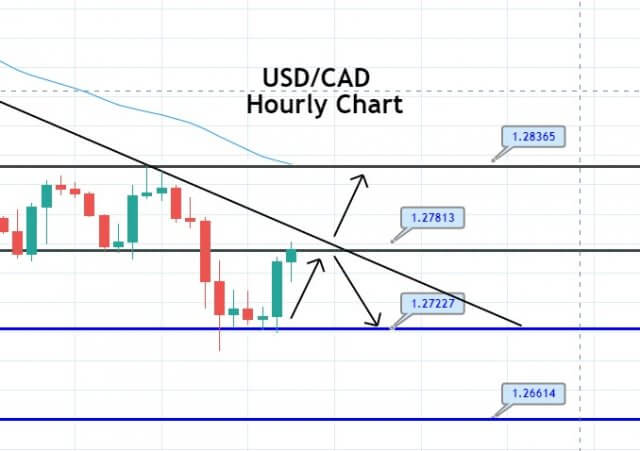 The ECB extended its bond-buying scheme and issued further stimulus measures on Thursday to support the Eurozone economy from the coronavirus pandemic. The additional support from ECB raised the hopes of the quick economic recovery of the Eurozone economy. It supported the single currency Euro that ultimately added weight to the US dollar. The US dollar was also under pressure as Congress has still not issued a second round of stimulus packages due to Democrats and Republicans’ stalemate over the size of the package. The weak US dollar added weight to the USD/CAD pair on Thursday.

Meanwhile, the Crude oil prices rose by 4.4% to above the $47.7 level on Thursday, and it was the highest level in months. The rising risk sentiment in the market related to vaccine optimism and quick global economic recovery with the release of stimulus measures from big nations added that energy demand would rise, and it supported the Crude oil prices.

On Thursday, the rising crude oil prices added strength in the Canadian dollar that ultimately weighed on the USD/CAD pair and added in its losses.

The US dollar was also weak because of the higher unemployment claims last week due to the state governments’ rising number of restrictive measures. The weak US dollar supported the bearish trend in the USD/CAD pair on Thursday. Furthermore, a Deputy Governor of the Bank of Canada, Paul Beaudry, said that the central bank was monitoring rising housing prices on Thursday. It kept the interest rates low to help the borrowers cope with the coronavirus pandemic.

Beaudry said that BoC had lowered borrowing costs so that homebuyers can better carry the monthly burden of mortgages. He added that before a bank increases the interest rates, it wants everyone to work on a sustainable basis and the economy back to full capacity. He also stated that a whole set of businesses was on the edge of falling over due to the second wave of coronavirus, although there have not been too many bankruptcies. These comments from Beaudry added strength to the Canadian dollar and weighed on the USD/CAD pair.

The USD/CAD pair is trading with a bullish bias today at the 1.2778 level, holding below an immediate resistance level of 1.2800. The resistance level is extended by a downward trendline, which suggests odds of selling bias in the market. On the lower side, the support stays at the 1.2722 level while the 50 periods EMA also holds around the 1.2836 level suggesting bearish bias in the market. The MACD is crossing over into the bullish zone, suggesting odds of buying trend continuation in the market. That’s why we are not entering the market right now. Let’s wait for the market to test and close below the 1.28300 area, and then we can take a sell trade. Good luck!