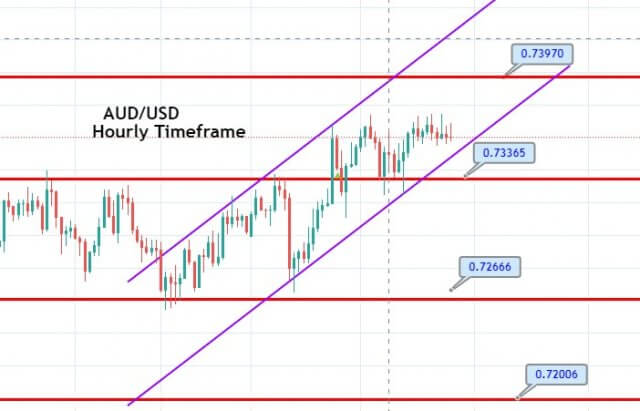 The AUD/USD pair was closed at 0.73658 after placing a high of 0.73732 and a low of 0.73248. The AUD/USD pair extended its gains on Wednesday after falling to the 0.73200 level. The pair fell in an earlier trading session on the day but reversed its direction after releasing U.S. macro-economic data.

The rising unemployment claims and personal income data weighed on the optimism that economic recovery was near and faded the risk sentiment. The risk rally deteriorated after the mixed macroeconomic data from the U.S. and weighed on the risk perceived Aussie that caused the pair to fall in an earlier session.

The pair managed to end its day on a bullish stance due to U.S. dollar weakness in the absence of any major fundamental. The market mood was smooth on Wednesday and the risk perceived AUD/USD continued following the previous optimism regarding the vaccine development from AstraZeneca and Moderna. Pfizer and BioNtech were close to getting approval from the US FDA for emergency use authorization of their vaccine, causing an immediate rise in risk rally and supporting further the AUD/USD currency pair. Investors also remained cautious on Wednesday and followed the previous daily movement ahead of the release of FOMC minutes from the November meeting.

The AUD/USD long term view of the market is bullish. We were approaching a resistance level at 0.73400, which has now been violated and the AUD/USD pair has the potential to go after the 0.7397 level. We have already captured this trade and enchased 30+ pips in a trade. For now, we will be looking for a retracement until the 0.7395-90 area to take another buying position in AUD/USD as bullish bias seems dominant today. Good luck!