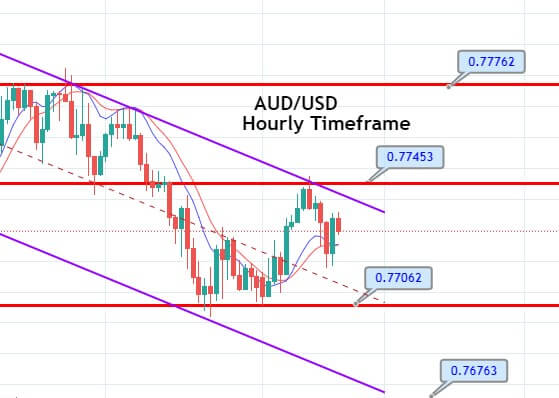 The AUD/USD pair was closed at 0.77101 after placing a high of 0.77696 and a low of 0.77017. After rising for three consecutive days, AUD/USD pair dropped on Friday as the US dollar was seen stronger on the week’s ending day. As well, the rising demand for safe-haven and risk-off market sentiment also weighed on the AUD/USD pair.

The risk-sensitive Aussie came under fresh pressure after the new variants of coronavirus from Britain and South Africa prompted many countries to impose further restrictions to curb the virus’s spread and raise economic recovery concerns. The US imposed travel bans from Brazil, UK, South Africa, and 26 countries from European Union to protect Americans from new variants of coronavirus. The new variants were said to be more deadly as the death rate across the UK reached its highest level in the world on Wednesday. The US has also seen a rise in the mortality rate as the total infection cases reached 25 million.
This worsened coronavirus pandemic concerns for the global economic recovery and raised the need for safe-haven and risk-off market sentiment that ultimately weighed on the risk-perceived Aussie. The weakness of the Australian dollar added to the losses of the AUD/USD pair on Friday.

Another reason behind the decline of the AUD/USD pair on Friday was the US dollar’s strength driven by the rising prices of US Treasury yields. The US Dollar Index that measures the value of the greenback against the basket of six major currencies rose by 0.1%on Friday and reached 90.243 level that ultimately gave strength to the greenback and added further pressure on the AUD/USD pair.

The US Dollar was weak in the past days as the hopes for a massive stimulus package from Joe Biden was expected. After taking his office, Biden has proposed a $1.9 trillion relief aid package to help the economy through the pandemic crisis, and now traders have mostly ignored it as it has already been priced in, and that is why the US dollar kept on rising on Friday and weighing on AUD/USD pair.

The AUD/USD pair has violated the support level of 0.7745 level, and it’s holding below the same resistance level right now. On the lower side, the AUD/USD may extend the selling trend until the 0.7706 and 0.7676 level. The recent bearish engulfing candles are supporting selling bias in the AUD/USD pair. We should consider taking a selling trade below the 0.7745 level today. Good luck!