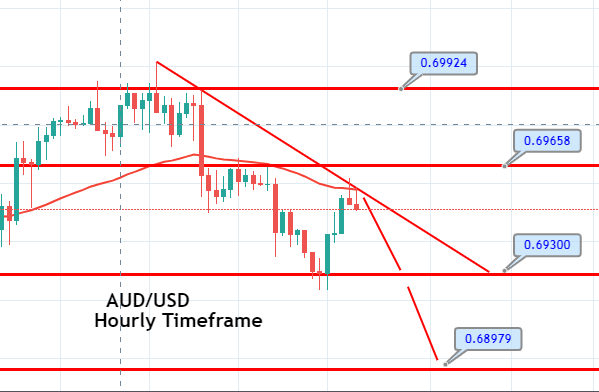 During Friday’s early European trading session, the AUD/USD currency pair failed to stop its previous session losing streak and was depressed near 0.6935 level of broad-based U.S. dollar strength triggered by the worst situation coronavirus. The risk-off market sentiment backed by the multiple factors weakened the Australian dollar’s perceived riskier and contributed to the currency pair gains. At the moment, the AUD/USD currency pair is currently trading at 0.6947 and consolidating in the range between 0.6924 – 0.6966. However, the investors seemed cautious to place any strong bids due to light trading on the day ahead.

The ever-increasing cases of coronavirus in Australia’s most populous states and the United States overshadowed V-shaped global economic recovery prospects. As in result, Australia’s Prime Minister decided to re-impose lockdowns and border restrictions to contain the spread of coronavirus cases. As per the latest report, the U.S. cases crossed a total of 3.0 million cases and reported over 60,000 cases on Thursday. Furthermore, over 12.2 million cases and 550,000 deaths globally were reported as of July 10, as per John Hopkins University data. Most of the states like Florida, Texas, and California, reported a record-high number of new cases on Thursday.

However, the gloomy outlook was further bolstered by the ongoing tussle between the United States and China. The conflict between both parties was further fueled after Trump administration member Mike Pompeo announced visa restrictions on the People’s Republic of China (PRC) government and Chinese Communist Party officials over creating hardships for foreigners to visit Tibet. The United States imposed another sanction on the highest-ranking Chinese official over alleged human rights abuses against the Uighur Muslim minority, which exerted some downside pressure on the risk-tone and contributed to the currency pair declines.

As in result, the broad-based U.S. dollar flashed green and took bids on the day as investors preferred the safe-haven asset mainly due to concerns about the mounting coronavirus cases. However, the gains in the U.S. dollar kept the pair under pressure. Whereas, the U.S. Dollar Index that tracks the greenback against a basket of other currencies gained 0.13% to 96.802 by 10:06 AM ET (3:06 AM GMT). As well as, the gain in the U.S. dollar was further supported by the reports that the U.S. Supreme Court ruled out that Democratic-led congressional committees were allowed to obtain U.S. President Donald Trump’s financial records, as reported by Reuters.

On the positive side, the Japanese Prime Minister (PM) Shinzo Abe and Australian PM Scott Morrison talked yesterday via a virtual summit. They showed readiness to accelerate preparations to resume limited travel among business people. This news helped the AUD/USD currency pair to limit its deeper losses.


The market participants will keep their eyes on the trade/virus updates due to the lack of major economic data today. As well as, the sentiment on the Asian indices and USD dynamics will be closely followed for the pair’s next directions. In the meantime, the U.S. Producer Price Index (PPI) will be key to watch.

The AUD/USD tested the double bottom pattern at 0.69300 level before bouncing off to 0.6965 level. On the hourly timeframe, the AUD/USD pair is testing the 50 periods EMA at a 0.6960 level, and the closing of candles below 0.6956 suggests the chances of selling trend until the level of 0.6930. The MACD is still in the buying zone; however, the 50 periods EMA is likely to push the pair lower until the level of 0.6930. Follow a quick trade plan below..