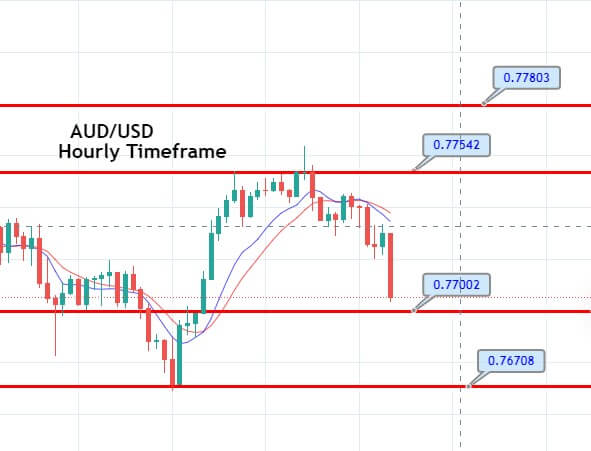 The AUD/USD pair was closed at 0.77473 after placing a high of 0.77540 and a low of 0.76686. After placing losses for 2 consecutive sessions, AUD/USD pair rose on Tuesday amid the turnaround of risk appetite in the market sentiment. The risk-sensitive Australian dollar gained traction on Tuesday after the positive vaccine news took hold of the market. The European equities, US stocks, and Bond yields rose during European trading hours amid the risk appetite in the market driven by attesting vaccine developers’ announcement.

Moderna and Pfizer announced that they were investigating work on the booster vaccine shots that will provide immunity even against the new variants like the one that emerged in UK, Brazil, and South Africa and promised to deliver them by 6-12 months. Whereas Johnson & Johnson also announced to release its vaccine data later this week and was very hopeful that their data will be robust and game-changer. As J7J has claimed that its vaccine will provide full immunity in a single shot, unlike other current vaccines that provide 90-95% immunity.
The rising risk sentiment because of the positive vaccine news gave strength to the risk perceived Aussie and supported the upward momentum in AUD/USD pair on Tuesday.

Despite strong macroeconomic data from the US, the US dollar failed to gain traction on Tuesday as the US Dollar Index fell by 0.2% on the day against the basket of major currencies. The decline in the US dollar could be attributed to the rebound in risk sentiment in the market. The weakness of the US dollar also helped AUD/USD pair to post gains for the day.

However, the AUD/USD pair’s gains were somehow capped as the tensions between the US & China escalated at the South China Sea. After the warning from Chinese President Xi Jinping, who said that if global leaders will try to intimidate or threaten others, then a new Cold War could begin and urged them to be united in the face of coronavirus pandemic. These developments weighed on China-proxy Aussie and capped further upside in AUD/USD pair on Tuesday.