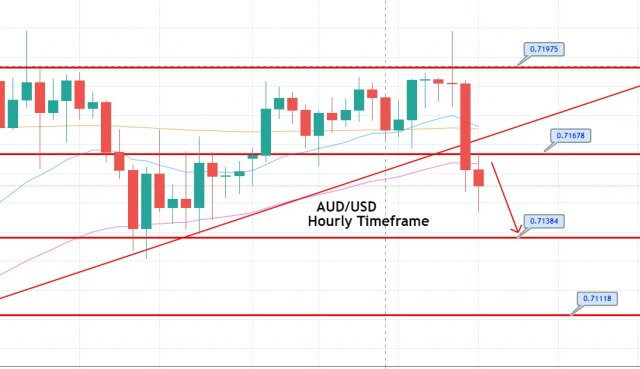 The AUD/USD currency pair failed to extend its early-day bullish moves and dropped below the 0.7200 level despite the upbeat market sentiment and weaker U.S. dollar. Conclusion: as we all know that these both factors tend to support the currency pair; unfortunately, the currency pair was rather unaffected by these positive factors. However, the reason for the ongoing bearish sentiment around the currency pair could be associated with the RBA’s announcement of no rate change, which is seen as negative, or bearish for the AUD currency.

Meanwhile, the losses in the currency pair were further bolstered after the RBA shared a dovish view on the Australian economy, which eventually undermined the Australian dollar and contributed to the currency pair gains. On the contrary, the broad-based U.S. dollar weakness, buoyed by the market risk-on mood, could be considered the key factor that might cap the further downside for the currency pair. Furthermore, the positive reports over the U.S. President Donald Trump’s health also help the currency pair limit its deeper losses. The AUD/USD currency pair is currently trading at 0.7152 and consolidating in the range between 0.7147 – 0.7208.

Despite the ongoing rise in the COVID-19 cases, coupled with the fears of lockdown restrictions, the pair’s loosest trading sentiment has been flashing green since the day started. However, the market trading tone was being supported by the optimism over the U.S. President Trump’s health. As per the latest report, the U.S. President Donald Trump returned to the White House after a three-night hospital stay due to coronavirus infection, which boosted the market risk tone and helped the currency pair to limit its deeper losses.

At home, the Reserve Bank of Australia (RBA) kept its cash rate and the targeted yield on 3-year bonds unchanged at 0.25% during the latest announcement. In the meantime, the RBA shared a dovish view on the Australian economy, which undermined the Australian dollar and contributed to the currency pair losses. According to the RBA latest report, Unemployment and underemployment rate are expected to remain high for an extended period, as well as “Wage, and inflation pressures remain very depressed.”.

Furthermore, the reason for the losses in the currency pair could be associated with some repositioning trade ahead of the Australian budget. It should be noted that the Australian government is expected to unveil a fiscal blueprint and introduce other measures to drive the economic recovery from the coronavirus-induced recession. This might weak the AUD demand and drag the currency pair further down.


At the USD front, the broad-based U.S. dollar failed to gain any positive traction on the day amid risk-on market sentiment. Moreover, the U.S. dollar losses could also be associated with the rising hopes that the U.S. Congress will reach an agreement over the latest stimulus measures to control the economic impact of COVID-19. However, the U.S. dollar losses became the key factor that kept the currency pair’s losses limited. Whereas, the U.S. Dollar Index, which tracks the greenback against a bucket of other currencies, dropped by 0.03% to 93.468 by 9:52 PM ET (1:52 AM GMT). Looking forward, the market traders keeping their eyes on the Fed Chair Jerome Powell’s scheduled speech. In the meantime, the updates surrounding the fresh Sino-US tussle, as well as the coronavirus (COVID-19), could not lose their importance.

The AUDUSD is likely to trade with a bearish bias today, as we can see on the hourly timeframe, gold has violated an upward trendline support level of 0.7177 level, and the closing of candles below this level is likely to drive selling bias until 0.7160 and 0.7140 level. Selling bias remains dominant today.