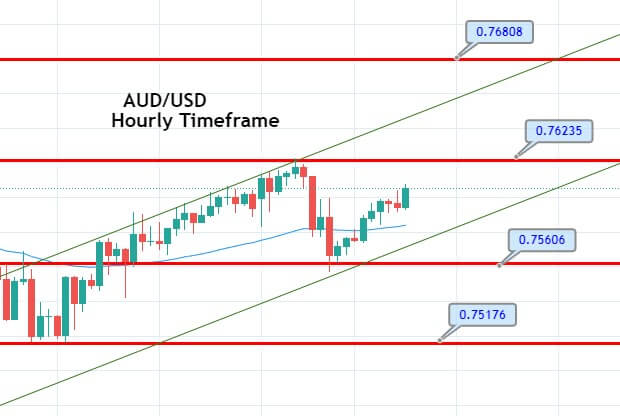 The AUD/USD closed at 0.75809 after placing a high of 0.76223 and a low of 0.75570. After placing bullish moves for two consecutive days, the AUD/USD pair fell after a long weekend despite the rising risk-on market sentiment amid the rebound in the greenback. The US President Donald Trump raised the global markets on Monday after signing the coronavirus stimulus bill that was long-awaited and has been under negotiations since May. Though his demand for $2000 paychecks and removal of section 230 was currently under debate in the Senate, the US Treasury has already said to disburse $600 weekly paychecks.

Meanwhile, House Speaker Nancy Pelosi showed readiness to get the $2000 passed in Congress. This raised the risk sentiment in the already high market because of the vaccine rollout and Brexit optimism. However, the Aussie-China tussle and the fear of a new variant of coronavirus kept the pair AUD/USD under pressure.

According to the data released by the General Administration of Customs, China’s import of Australian copper concentrate fell by 34% to 26,717 tonnes in November, the lowest level since January 2017. On the other hand, Australia insisted the World Health Organization (WHO) inquiry into coronavirus origin must be robust, despite China’s tensions.

Looking forward, a lack of major data requires the pair of traders to watch risk catalysts for immediate direction. Among them, the US stimulus passage and any developments on the Canberra-Beijing tension will be the key.

Meanwhile, the US dollar was weak across the board due to the stimulus bill turned into legislation after Trump signed it. The US Dollar Index that tracks the greenback against a basket of other currencies edged down 0.15% to 90.112 that capped further downside in AUD/USD pair. In the absence of any macroeconomic data and holiday-thinned trading, the currency pair AUD/USD remained depressed on Monday.

The AUD/USD is trading bullish at the 0.76050 level, forming an upward channel on the two-hourly timeframes. The AUD/USD pair may find resistance at the 0.7625 level, and a bullish breakout of this level can extend the buying trend until the 0.7680 level. On the lower side, the support stays at the 0.7560 mark. Bullish crossover of AUD/USD pair is likely to drive the further upward trend in Aussie; however, taking a bullish trade can be risky at this movement, especially when the market volatility is at its lowest. Good luck!