We will rank these factors on a scale from -10 to +10 depending on the severity of their impact.

This indicator measures the changes in the price of goods that manufacturers sell directly to wholesalers over a particular period. It is a leading indicator of overall inflation since the prices of goods and services from the manufacturers will be passed to the final consumer. Typically, an increase in demand in the market leads to higher prices while a drop in aggregate demand results in lower prices. Thus, changes in producer prices correspond to changes in GDP.

Capacity utilization measures the degree to which a country’s manufacturing and production capabilities are being put to use. It shows the total output being produced vs the maximum potential output produced using the same resources. In Australia, capacity utilization includes companies operating in the industrial sector; which include manufacturing, mining, and utility firms. It is a leading indicator of overall economic growth.

In November 2020, Australian capacity utilization rose to 79.32% from 77.93% in October. This shows that the industrial sector is expanding from the lows of the pandemic. However, the current utilization is still below 81.34% recorded in January. It has a score of -5.

This represents the portion of the disposable income that households do not use to purchase goods and services and transfer payments. Typically, what is not consumed is considered savings. Therefore, when the household saving ratio increases, Australian households are spending less on domestic consumption. Since GDP heavily relies on domestic expenditure, an increase in household savings ratio is a leading indicator of economic contraction.

In Australia,  the HPI measures the quarterly change in the price of residential property in eight cities. Canberra, Sydney, Brisbane, Hobart, Melbourne, Perth, Adelaide, and Darwin. When the HPI increases, it shows that demand in the real estate market is growing, which corresponds to economic expansion.

This includes the totality of government expenditure on the purchase of goods and services, transfer payments in social security, and investments. It is used in the computation of the total government budget value. Fiscal policy is used to stimulate economic growth. Usually, in times of economic crises, the government increases its fiscal expenditure – mostly on transfer payments. This is meant to cushion households from adverse economic conditions. More so, it increases domestic demand which spurs economic growth.

This shows the number of companies operating in Australia unable to continue with their operations due to the inability to repay their debts. It corresponds to changes in economic conditions and demand for goods and services by households.

In October 2020, the number of companies that declared bankruptcy in Australia dropped to 279 from 298 in September. There has been a steady decline in Australian bankruptcies since March when it reached yearly highs of 683. It has a score of 3.

The producer price change measures the YoY change in the prices of goods and services sold to the wholesalers directly from the producers. The index covers all sectors in the Japanese economy. Hence it is a leading indicator of the overall inflation in the economy.

This measures the amount of income that households in Japan save in relation to their total disposable income. When the ratio increases, Japanese households are postponing consumption. This is interpreted as expectations that future economic conditions might worsen; hence, households save for a rainy day. In such a case, domestic demand for goods and services is depressed, which means that the GDP drops. Conversely, when the savings ratio decreases, expenditure increases; hence, rise in the GDP.

Bankruptcies show the monthly change in the number of Japanese businesses unable to service their debt obligations and thus forced to cease operations. As an indicator of the domestic economy, bankruptcies show how well the economy supports businesses in terms of creating and shedding jobs. Naturally, when bankruptcies increase, it correlates with increases in job losses and contraction of the economy.

Annual GDP growth rate measures if a country’s economy is expanding, contracting, or stagnating. It tracks the change in GDP growth at a particular period over the preceding year. By measuring the annual GDP growth rate differential, we can effectively compare economic growth in Australia and Japan since both economies have different compositions, making absolute comparison ineffective. The differential is positive when the Australian economy is expanding faster or contracting slower than the Japanese economy. In this case, the AUD/JPY pair will be bullish, and vice versa.

The AUD/JPY pair’s interest rate differential shows whether the pair is bound to be bullish or bearish in the long term. If positive, then Australia has a higher interest rate than Japan which means that traders and investors would earn higher returns by selling the JPY and buying the AUD’ hence, a bullish AUD/JPY. When Japan has a higher interest rate, traders will earn higher returns by selling AUD and buying JPY; hence, a bearish AUD/JPY.

The exogenous factors have a score of 6 which means the AUD/JPY pair can be expected to continue trading in a bullish trend. Technical analysis of the pair’s weekly price chart shows it is attempting to breach the upper Bollinger band. More so, the pair has formed ‘hammer’ candlesticks showing that bears have failed to push the price lower. 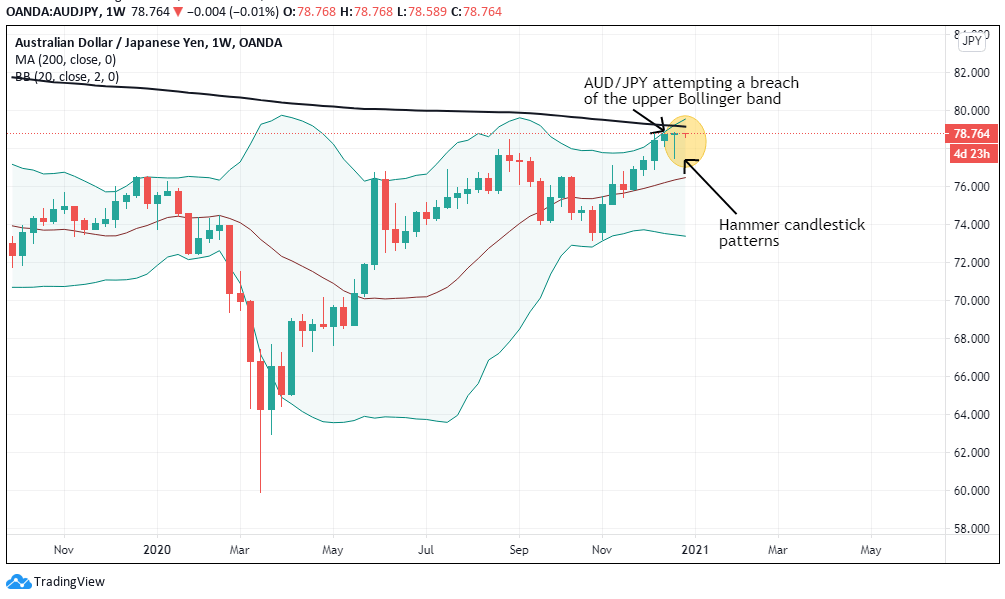