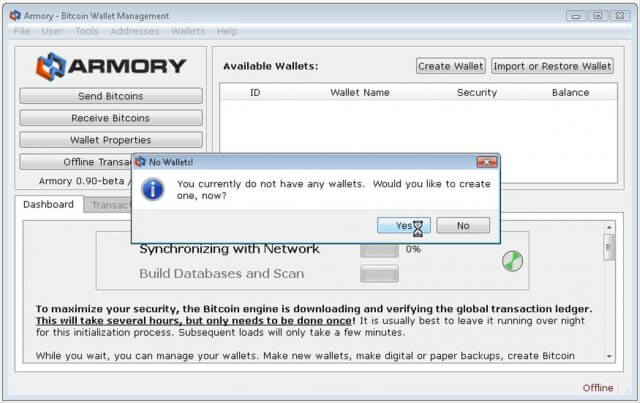 Armory is a cold wallet for storing Bitcoins. It is among the earliest Bitcoin cold wallets. In fact, the idea of cold wallets was first implemented in Armory. Its main advantage is security while setup difficulty and the lack of a mobile option are its major downfalls.

Armory is arguably one of the best cold wallets. As a cold wallet, it offers offline transaction signing which enhances the security of a user’s private key, and thus, their precious coins.

In this review, we will look at Armory’s key features, how to create a wallet, it’s security, and transactions Bitcoins. We will also look at the pros and cons of the wallet.

By now, it should be evident that the security of the wallet is what makes Armory stand above its peers. Armory achieves this praiseworthy feat through its genius key storage mechanism. Unlike the majority of Bitcoin wallets which store users’ private keys on internet-connected devices, Amory keeps these gems offline – away from the prying eyes of crypto cyberpunks.

This is why offline key storage is such a big deal – to complete a transaction, you need both a private key and a public key. Assume the public key is your wallet’s address and the private key is your access code. Unlike hot wallets that are connected to the internet during transactions, Armory initiates transactions online but goes offline when signing them. This is a simplistic explanation, but what Armory does is it protects your private key data from hackers when authorizing transactions. That way, anyone trying to steal your Bitcoins must first have physical access to your computer.

Armory also adds multi-signature support to its security portfolio. Multisignature (you might hear multi-sig more often) allows multiple devices to sign a transaction jointly for it to be processed. It is akin to having multiple account signatories in traditional banking. That said, multisignature capability further reduces the risk of fraudulent transactions in case someone somehow accesses your private key.

Despite all the security advances integrated into the wallet, you should keep in mind that the security of your account remains your responsibility. If a cryptocurrency-stealing malware replaces the destination address you are about to copy-paste with a hacker’s wallet address, you really cannot blame Armory, can you?

Opening an account with Armory is quite cumbersome. Please note that this wallet is only available as a desktop application. Anyway, the following steps should help you set up:

As you see, it takes some effort and patience to get your Armory wallet up and running.

You’ve probably heard of multisig capabilities. Let’s take a moment to look at this special feature included in Armory’s arsenal.

The wallet provides multisig capabilities through lockboxes. A lockbox in Armory is a container for funds whose signing authority is split among several devices. Funds held in a lockbox cannot be transferred until a predetermined number of devices sign. This feature can be useful where huge sums need to be transferred and there are security concerns regarding authorization.

To create a lockbox, click on the “Lockboxes (Multi-Sig) button on the application’s main screen. A pop-up screen will appear. You need to set the number of authorized signatures and the minimum number required to approve a transaction. Then, simply add the public keys of the signatories.

The following YouTube video can guide you further on creating multisignature lockboxes https://youtu.be/B5E3WQjSB6w.

To send coins in online mode:

Please note that received coins are registered on Bitcoin’s blockchain using your public key. Thus, there is no need to receive them in offline mode.

As you have seen above, sending and receiving Bitcoins with Armory is pretty simple.

Downloading armory and creating a wallet will not cost you anything. However, you will be charged some fees when transacting on the Bitcoin network. Armory plays no role in determining this fee. Fees are decided by the Bitcoin network and are charged to discourage users from spamming the network with unnecessary transactions and reward miners for confirming transactions.

Armory supports only Bitcoins, and support for other currencies in the future is unlikely. Apparently, the developers of the wallet want to focus on creating the best security and user experience for its users, and not adding more capabilities. So far, they have delivered to this end.

Believe it or not, Armory has a 24/7 support phone line. If this does not surprise you, please note that the majority of cryptocurrency wallets do not even have email support. If you experience issues with your wallet, you can dial the toll-free number, +1-844-625-2686, and their team of experts will be waiting on the other end to work on your issue.

Talking of issues, some of the common ones you are likely to experience include password errors, you are unable to withdraw coins, there is an unexplained delay during withdrawal, your wallet has refused to generate a password, and so on. Again, phone support should be your first option for getting help for urgent issues.

You can also find answers to some of these concerns by browsing the FAQ section of their website.

General inquiries can be channeled to contact@bitcoinarmory.com. Emails to this address may not be personally answered due to the magnitude of Armory implementations. Follow the team on Twitter @armory, mostly for updates and the latest news regarding the wallet.

Before we evaluate Amory’s pros and cons, let us agree on the factors that you will be typically looking for in a crypto wallet.

Having these factors in mind, we can have a fair evaluation of Amory’s pros and cons. So, let’s look at them!

What would happen if the company shuts its operations?

The Armory Wallet is maintained by Armory Technologies. If the company halts operations, your coins will still be safe because they exist in the Bitcoin network and not the wallet itself. The wallet only keeps the keys you need to access your funds. You can always restore access using the paper or digital backup you created during set up.

Does Armory charge fees at a flat rate or it depends on the amount transferred?

Armory itself does not charge any fee. The amount you are charged is determined by the Bitcoin network and depends on the size of the transaction in bytes and the age of the funds (the period between when funds were received and the time of the current transaction).

Do I need to download the whole Bitcoin blockchain to my local storage?

Unfortunately, yes. Since the Bitcoin network is distributed, Armory needs a copy of what other nodes on the network have.

Does Armory have any security concerns?

A lot has been said about how secure the wallet is. However, the lack of multifactor authentication remains a concern. If someone has physical access to your device and they have your passphrase, they can transact on your account.

Can my wallet be hacked?

While, theoretically, anything can be hacked, Armory has advanced security features including hierarchical deterministic address generation and multisignature capabilities, which make it less prone to common cryptocurrency wallet attacks.

The wallet is also immune to GPU-accelerated brute force attacks. This means if someone steals the computer that runs your wallet, they cannot crack Armory to get your keys, at least according to the technical team’s claim.

Armory Wallet has so many features that cannot be exhausted in one post. Luckily, there are a lot of online tutorials that can guide you on exploring its full potential.

If you are concerned about the safety of your coins, consider Armory as it provides highly-sophisticated security features. Its cold storage feature allows you to retain your private key keeping it away from potential hackers. You can also restore your wallet on another device if you lose your primary device. Sending and receiving bitcoins using Armory is also fairly simple. However one of the biggest challenges with the wallet is the difficulty in setting it up. Also, it’s limited in that you can only transact bitcoins. All in all, once you learn how to use the wallet, you will find it a secure and convenient option for making your BTC transactions.