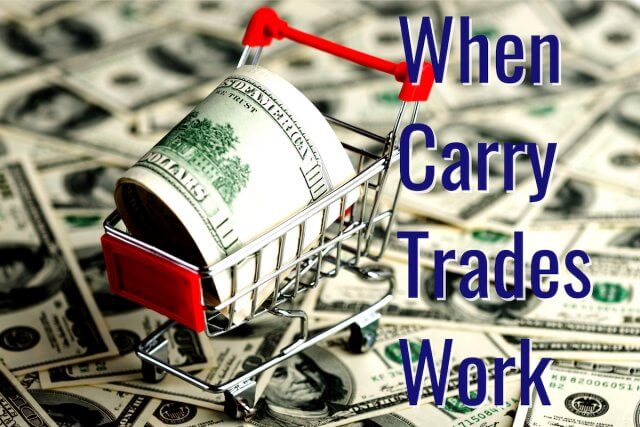 Now that you understand what a carry trade is in the forex market, the next logical step is to show you when this strategy works and when it fails. We already know that the carry trade entirely depends on interest rates between two countries.

In this case, you’d expect profits of 0.35%. By now, we already know that forex traders always anticipate the monetary policy actions of central banks.

When do Carry Trades Work?

Firstly, it is during periods of low volatility. When there are minimal price fluctuations, traders may be induced to take on more risks to increase their profits – carry trade. In this case, provided the value of the currency doesn’t fall, the rollover earned is a good incentive.

When Do Carry Trades Not Work?

We’ve already established that for a carry trade to be effective, the interest rate differential needs to be high or increasing. That means that one country should be increasing its interest rate while another decreasing.

Economic indicators in the US points towards higher possibilities of a recession. Say the unemployment levels are increasing, manufacturing is falling, GDP is contracting, and retail sales are nose-diving.

Forex traders can anticipate that the Federal Reserve will cut interest rates to stimulate the economy. In this case, the USD will be considered a high-risk currency since investors will have a higher aversion towards it. Now, instead of purchasing the USD, investors will opt for other currencies with a more stable outlook.  The logic behind this is that the interest rate differential has reduced or is expected to reduce vis-a-vis USD/JPY.