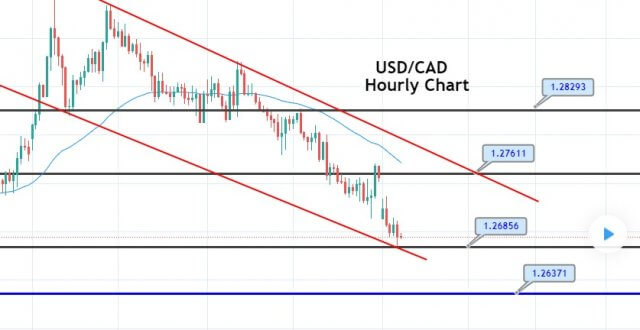 The USD/CAD pair was opened at 1.27142, and it has placed a high of 1.27358 and a low of 1.26950 since then. The pair was currently moving at 1.27035 and was posting losses on Monday for the 5th consecutive session. The losses in the USD/CAD pair during the Asian session on Monday could be attributed to the US dollar’s weakness along with the rising crude oil prices on the day. The deteriorated risk-sentiment could also be a factor behind the USD/CAD pair’s declining prices on Monday.

The US Dollar was weak across the board on Monday as the US saw a massive increase in the number of coronavirus cases as the total count of infection cases reached 21,110,917 in the country and made it the worst-hit country by the COVID-19. The US Dollar Index was also down on Monday by 0.25% at the 89.67 level.

The US dollar weakness could also be attributed to the latest rejection of an increase in direct payments by the US Senate. Lately, the US President called to increase the direct payments to Americans to $2000 from $600 that was also supported by Democrats; however, these efforts have come to an end after Republicans refused to increase them. Furthermore, the US billions were also hesitant to place strong moves in the market ahead of Tuesday’s Georgia’s electoral runoff and Wednesday’s December meeting minutes release from FOMC.

On the other hand, the West Texas Intermediate (WTI) Crude Oil prices on Monday have reached $49.27 per barrel so far and were moving upward continuously. The crude oil has posted gains for four consecutive sessions, and the outlook remained positive, which means it could increase further. The rising crude oil prices added support to the commodity-linked currency Loonie that ultimately added more pressure on the USD/CAD pair’s prices on Monday.

On the data front, Manufacturing PMI from Canada is expected to release at 19:30 GMT, November’s PMI was 55.8, and anything above it in December could be beneficial for the Canadian dollar, and anything less than it could be against the local currency. From the US side, at 19:45 GMT, the Final Manufacturing PMI from the US for December is predicted to come as 56.3 against the previous 56.5 that could hurt the US dollar and add further losses in the USD/CAD pair. At 20:00 GMT, the Construction Spending for November is forecasted to drop to 1.1% against the previous 1.3% that could also add more losses in the USD/CAD pair.

The USD/CAD is trading at 1.2684, and violation of this level can extend the selling trend until the 1.2637 level. On the 2 hour timeframe, the USD/CAD is supported due to the triple bottom, but the RSI and MACD are suggesting a selling trend in USD/CAD. However, we can’t take a sell trade unless the 1.2685 level is violated. Let’s wait for a breakout elsewhere; we can take a buy trade over 1.2685 tp target 1.2760. Good luck!