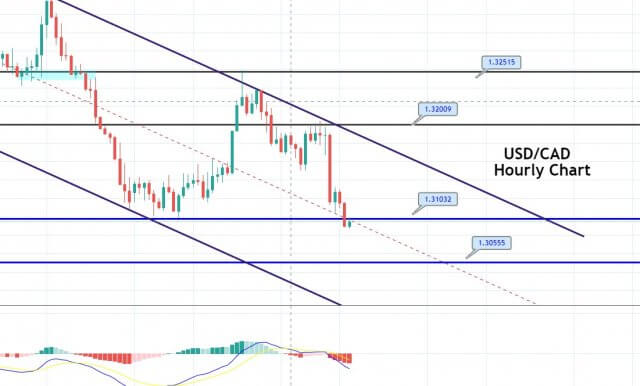 The USD/CAD pair was closed at 1.31273 after placing a high of 1.32036and a low of 1.31042. The USD/CAD fell to its fifth day lowest level on Tuesday amid the broad-based US dollar weakness and the strong rebound in crude oil prices.

The greenback was weak across the board due to the pertaining uncertainty over the US stimulus package’s development. The US Dollar Index dropped to 93.02 level, its lowest since October 9 on Tuesday amid the US equity market’s strength. The improved risk sentiment supported the US equity market and weighed on the US dollar that ultimately dragged the USD/Cad pair’s prices on Tuesday.

The focus of traders has been shifted to the US negotiations for a new round of US stimulus package for the coronavirus crisis. The US Speaker of the House, Nancy Pelosi, has set a deadline for reaching an agreement before the November 3 election.

Though US President Donald Trump has shown his support for the wide range of stimulus measures, still Nancy Pelosi has failed to break the impasse, and these developments have faded away from the hopes that US stimulus will be delivered before elections. These uncertainties kept the market sentiment under pressure, and the USD/CAD pair suffered because of it.

On the crude oil side, the WTI prices soared on Tuesday after falling for three consecutive days and reached near the $42 level amid the broad-based US dollar weakness. The rising crude oil prices gave strength to commodity-linked Loonie that ultimately added weight on the already declining USD/CAD pair. The Canadian dollar’s strength driven by raised risk sentiment and crude oil prices dragged the USD/CAD pair’s prices towards its five days lowest level on Tuesday.

The USD/CAD traded sharply bearish at the 1.3103 level, having violated the double bottom support area of the 1.3103 level on the 4-hour timeframe. Below this level, we may see further selling until the 1.3055 mark; however, the MACD and RSI are in an extremely oversold zone, and we may see a slight bullish recovery before entering into an additional selling zone. The idea is to wait for a bullish correction until the 1.3140 level that marks the 38.2% Fibonacci retracement level before taking another selling trade. Good luck!