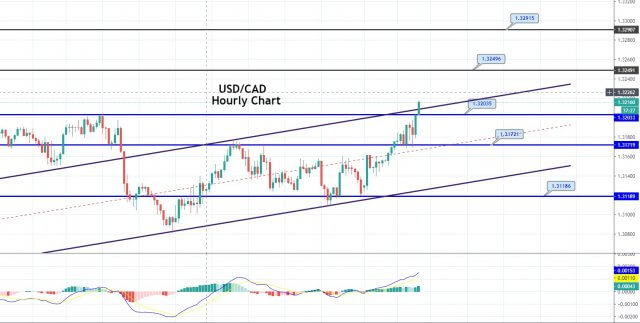 The on-again-off-again talks for the US stimulus package between Republicans and Democrats confused the traders and caused a flat movement in the USD/CAD pair on Thursday. The House of Representative Speaker Nancy Pelosi and the US Treasury Secretary Steven Mnuchin held talks on Thursday, but the prospect of a deal before elections were dimmed.

If a deal was reached tomorrow, the stimulus package will still not be implemented until after the election. For US President Trump who has pushed for a larger stimulus, it will be good news, but for Republicans senators who have their election campaigns to worry about, it will be bad news. A massive stimulus spending package before elections will not win many votes among conservative voters. Given this situation, the hopes for a stimulus measure package before elections faded away and raised bars for the US dollar that pushed the pair USD/CAD on the upside.

The rise in WTI crude oil prices above the $41 level gave strength to commodity-linked Loonie that ultimately weighed on USD/CAD pair, and the pair started to lose its early daily gains and ended its day on the same level it started its day with and the pair gave flat movement for the day.

The USD/CAD is trading with a bullish bias, especially after violating the upward channel that was enlarging resistance at 1.3203 level. On the lower side, the USD/CAD may find next support at 1.3203 area, and violation of this mark can drive the Loonie price towards the next support mark of 1.3172. The MACD is in a buying zone; therefore, we should look for a buying trade over 1.3203 level. Good luck!