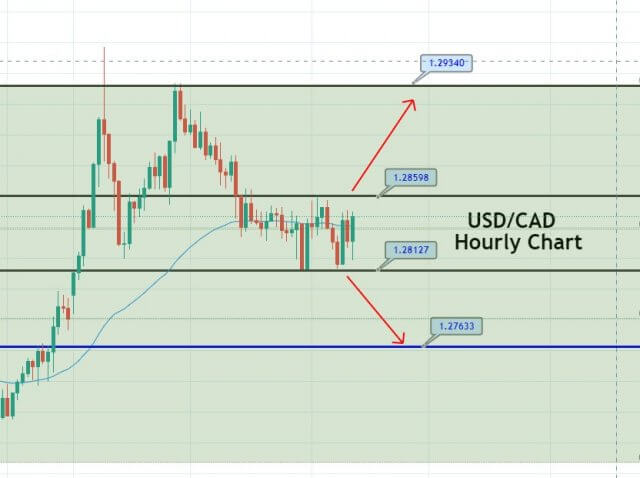 A day before, the USD/CAD opened at 1.28497, and it has placed a high of 1.28602 and a low of 1.28277 so far. The USD/CAD pair dropped on Monday amid the US dollar’s weakness and the rising crude oil prices. The USD/CAD pair dropped on Monday on the first day of the new trading week as the market’s risk sentiment was improved and supported the risk perceived Canadian Dollar. The risk sentiment in the market was high due to the latest Brexit trade-deal optimism and was further supported by the news of the US stimulus bill.

On Sunday, the US President Donald Trump signed a $2.3 trillion coronavirus relief and government funding bill that added optimism over a last-minute Brexit trade deal and supported the risk perceived Canadian Dollar. The strong Loonie added pressure on the USD/CAD pair that started to decline on Monday.

The US President Donald Trump, who initially called the bipartisan coronavirus bill a disgrace and threatened to reject the bill, backed down from his decision and signed the bill to make it legislation. The bill will include $900 billion in coronavirus relief bill and $1.4 trillion in government funding that would expire after 24 hours. The passing of the second round of the coronavirus relief bill before the US government shutdown soared the risk sentiment and pressured on the US dollar that ultimately added further to the USD/CAD pair’s losses. The greenback was lower in early trading hours on Monday as USD bulls were largely unimpressed by a goodish pickup in the US Treasury bond yields.

Meanwhile, on the WTI Crude oil front, the energy source prices rose on Monday as they hit $48.25 due to increased risk sentiment in the market and lower US dollar prices. The rising crude oil prices supported the commodity-linked currency Loonie that ultimately added further pressure on the USD/CAD pair on Monday. Another reason behind the declining USD/CAD pair and the Canadian Dollardollar’s strength against the greenback could also be the last-minute Brexit deal. On the last trading session on Thursday, the Canadian Dollar was strong against its counterpart US dollar as Britain secured a long-awaited Brexit deal with the EU.

The US dollar was already lower because of the Brexit deal against the basket of major six currencies, and Trump’s decision to pass the US stimulus bill added further in it that pushed the US Dollar Index lower on Monday and supported the bearish momentum in USD/CAD pair.

In the absence of any major macroeconomic release from the Canadian or US side, the pair USD/CAD continued declining on the back of the rising Canadian Dollar, improved risk sentiment amid the Brexit deal and US stimulus package, and the declining US dollar and rising Crude oil prices on Monday.

The USD/CAD consolidates in a narrow trading range of 1.2860 – 1.2812 level. The market isn’t moving a lot as the global banks are closed due to the boxing day holiday. The 50 EMA and MACD are suggesting odds of neutral bias in the market. However, we can expect to take a buying trade over the 1.2860 level to target the 1.2930 level. On the lower side, the violation of the 1.2810 level can extend the selling trend until the 1.2760 level. Let’s wait for a breakout to capture a quick buy or a sell trade. Good luck!