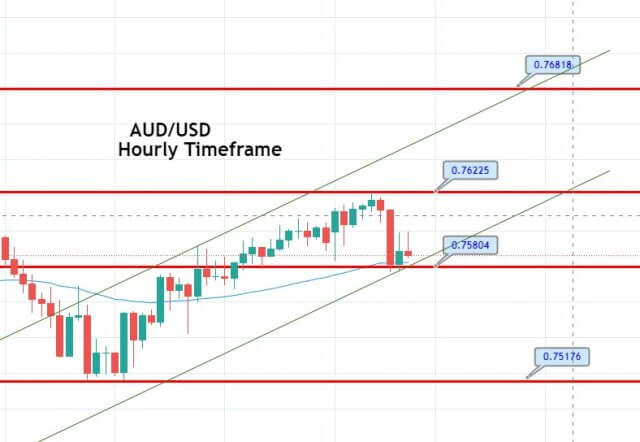 The AUD/USD opened at 0.75996, and it has placed a high of 0.76185 and a low of 0.75824 so far. AUD/USD pair seemed to extend its previous gains after moving in a bullish trend for two consecutive sessions on Monday. The upward momentum in the AUD/USD pair could be attributed to the US dollar weakness and rising risk sentiment in the market after a long weekend. The main reason behind the improved risk sentiment and the US dollar weakness was the news that US President Donald Trump has signed the second stimulus relief bill on Sunday.

Over the weekend, US President Donald Trump signed a $2.3 trillion stimulus package that would incude$900 billion for coronavirus relief and $1.4 trillion for government funding through next September. Initially, Trump called the package a “disgrace” and rejected to sign it into legislation and demanded to increase the stimulus checks to $2000; however, he backed down from his decision as the current government funding level was close to run out. The $900 billion coronavirus relief bill will provide $600 per person who makes less than $75000.

As the US government shutdown was near, the second round of the US stimulus bill provided hope to the investors that the economy will start recovering soon, raising the risk sentiment in the market.

This market sentiment supported the risk perceived Australian dollar, and the pair AUD/USD continued moving in the upward direction on Monday. Meanwhile, the US dollar also came under pressure after Donald Trump passed the second stimulus bill of $2.3 trillion as it would hurt the local currency. The AUD/USD pair got more strength from the US dollar’s weakness and raised its gains on Monday. Furthermore, the AUD/USD pair’s gains remained limited on Monday due to the latest pessimistic comments from the leading experts of China. The Tsinghua University’s Yan Xuetong said that though President-elect Joe Biden’s diplomatic strategy will be largely different from Trump’s strategy, it does not mean that US-China relations will improve. He added that Biden might seek to use the damage caused by Trump as a bargaining chip to get what he wants from Beijing.

These comments from top experts from China added to the tension lingering between the world’s two largest economies and weighed on the China-proxy Australian dollar that ultimately limited the AUD/USD pair’s upward momentum on Monday. However, the holiday-thinned trading condition and the absence of any macroeconomic data from either side, the currency pair AUD/USD continued following the market’s risk sentiment and remained on the upside on Monday.

The AUD/USD is trading at 0.7584 level, supported by an upward channel on the 2-hour timeframe. The 50 periods EMA is also supporting the pair at the 0.7580 level, and the MACD is closing histograms below 0, suggesting strong chances of selling. Since there’s a conflict between leading and lagging indicators, we may need to wait for either a bearish breakout below the 0.7580 level to take a sell trade or take a buying trade over 0.7580 once the MACD starts closing histograms over 0. Let’s keep an eye on the pair. Good luck!