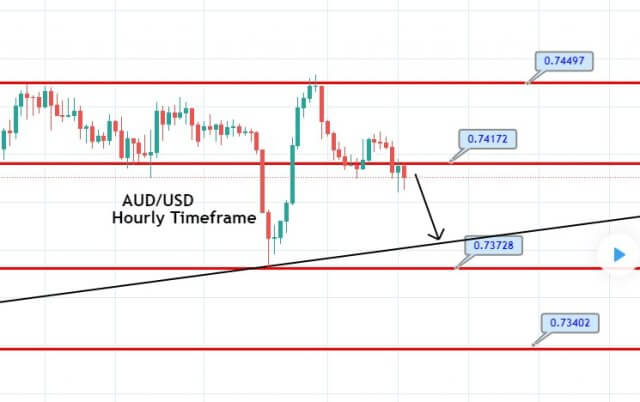 The AUD/USD pair was closed at 0.74189 after placing a high of 0.74532 and a low of 0.73722. The currency pair AUD/USD extended its bearish moves on Monday amid the rising demand for the greenback and the improving risk-off market sentiment. The risk perceived Aussie came under fresh pressure on Monday as the rising number of coronavirus cases in the US forced many state governors to expand the restrictions that ultimately diminished the hopes of the US economic recovery and raised the appeal for risk-averse market sentiment.

In the first trading session of Monday, the AUD/USD pair printed fresh multi-year highs above the 0.7450 level, but the pair started to decline after the risk-averse mode took its pace in the market.

The latest sanctions over 14 Chinese officials by the US also added in the risk-averse market sentiment and weighed on the risk perceived Aussie that dragged the AUD/USD pair on the downside. The Beijing-backed government of Hong Kong expelled four opposition members last month that ended up having the US government impose sanctions on Chinese officials and a travel ban and blocking any assets the official might have within the US.

The Chinese Trade Balance showed a surplus of 75.4B US dollars in the month of November and gave strength to the China-proxy Australian dollar due to their trading relationship and capped further losses in the AUD/USD pair on Monday.

Another factor involved in the declining AUD/USD pair’s prices on Monday was the US dollar’s strength due to its safe-haven status. The greenback gained traction in the market after the risk-off mood appeared because of the rising number of coronavirus cases in the US and the increasing hospitalization rate. The strong US dollar also added pressure on AUD/USD pair on Monday.