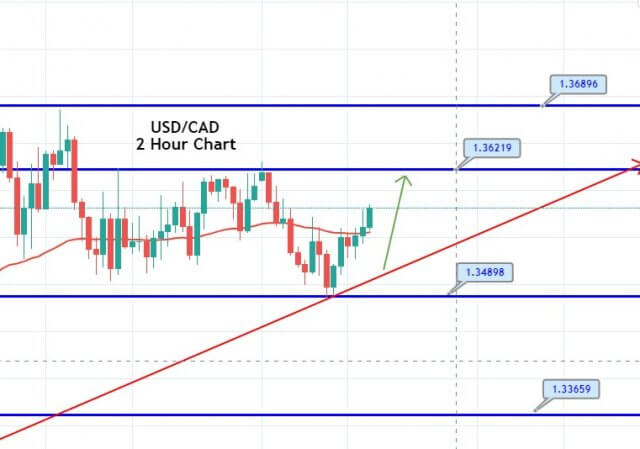 The USD/CAD currency pair extended its previous day winning streak and rose to 1.3580 level, mainly due to the declines in the crude oil prices, which tend to undermine the commodity-linked currency the loonie and contributed to the pair’s modest gains. The broad-based U.S. dollar strength initiated by the fresh pickup in the U.S. Treasury bond yields turned out to be one of the key factors that kept currency pair higher, at least for now. Currently, the USD/CAD currency pair is currently trading at 1.3562 and consolidating in the range between 1.3525 and 1.3583.

Moreover, the gain in the currency pair was further bolstered by the downbeat comments from the BOC Governor Macklem that they expect more coronavirus outbreaks as the economy reopens, which initially weighed on the Canadian dollar but the comments burden was short-lived.

The broad-based U.S. dollar stopped its early-day losses and mainly took fresh bids due to a rise in the U.S. Treasury bond yields. As well as, the remaining uncertainty in the market backed by trade and virus worries also lend some support to the U.S. dollar. Whereas the U.S. 10-year Treasury yields remained positive, around 0.72% and stocks in Asia flashed mixed signals. However, the U.S. dollar’s fresh gains turned out to be one of the key factors that kept the currency pair higher. The dollar index, which measures the greenback performance versus a basket of six other currencies, was up 0.15% at 96.798.

At the Crude oil front, the WTI crude oil prices failed to stop its previous day losing streak and dropped below $40.00 level on the day mainly due to the bearish U.S. inventory report released by the American Petroleum Institute (API) which eventually added worries about oversupply and contributed to the oil declines. The selling bias in the oil prices ultimately undermined the commodity-linked currency the loonie and contributed to the pair’s modest gains.

The traders will keep their focus on the USD price dynamics and the broader risk sentiment. This makes it reasonable to wait for some strong follow-through strength before confirming that the USD/CAD pair might have bottomed out.


Technically, the USD/CAD is supported around 1.3489 level, and closing of candles above this level is suggesting odds of bullish trend continuation. Recently, the USD/CAD has also crossover over the 50 EMA from the lower side to up, making it a bullish crossover. The bullish crossover demonstrates that traders are trading and supported the bullish bias, and we seem to have a chance to capture a quick buying position in the USD/CAD pair. Here’s a quick trade signal.