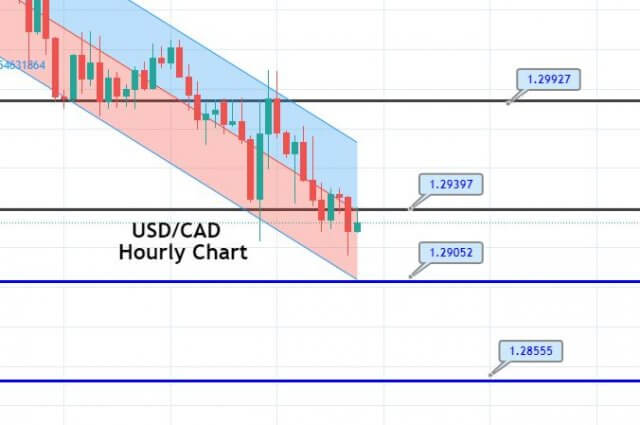 The USD/CAD pair was closed at 1.29331 after placing a high of 1.30087 and a low of 1.29277. The USD/CAD pair fell on Tuesday despite the declining WTI crude oil prices due to weak US dollar demand on the day.
The USD/CAD pair dropped on the day as the US dollar was weak across the board after the release of US macroeconomic figures and also because of the rising hopes for the US stimulus package after the testimony of Jerome Powell and Steven Mnuchin.

On the data front, at 18:30 GMT, the Canadian Gross Domestic Product in October declined to 0.8% against the expected 0.9% and weighed on the Canadian dollar but failed to cap losses in the USD/CAD pair as the focus of investors was more towards the weakness of US dollar on the day. At 19:30 GMT, the Manufacturing PMI from Canada for November came in line with the forecasts of 55.8.

Meanwhile, the hopes for further stimulus aid in the US from Congress started to rise as Jerome Powell called the outlook for the United States economy extraordinarily uncertain due to increased coronavirus cases and deaths. The US health officials have said that vaccinating Americans will hopefully be started by mid-December as the death rates have risen to an alarming level. All these things included US stimulus hopes, a rising number of coronavirus cases, and the weak macroeconomic data added heavy pressure on the US dollar that dragged the USD/CAD pair lower despite the declining crude oil prices on Tuesday.

The WTI Crude Oil prices also declined on Tuesday after the OPEC+ meeting was reportedly delayed until Thursday to allow for more negotiations. It came in as UAE signaled that it would not support the three months extension of current output cuts by OPEC+. Furthermore, Saudi Arabia also said that it was considering stepping down from the co-chair of the OPEC+ JMMC as the country was unhappy with the things going on recently.

The declining crude oil prices due to the delayed OPEC+ meeting also weighed on commodity lined Loonie, but it failed to reverse the USD/CAD pair’s direction as the focus of the market was solely on the US dollar’s weakness on Tuesday.

On the technical front, the USD/CAD pair is trading with a bearish bias at the 1.2939 level, having crossed below the 1.2939 support level, which is now likely to work as a resistance. On the 4 hour timeframe, the USD/CAD has formed a downward channel, which supports the selling bias in the Loonie. Closing of candles below the 1.2945 level may help us capture a quick selling trade. Check out a trading plan…