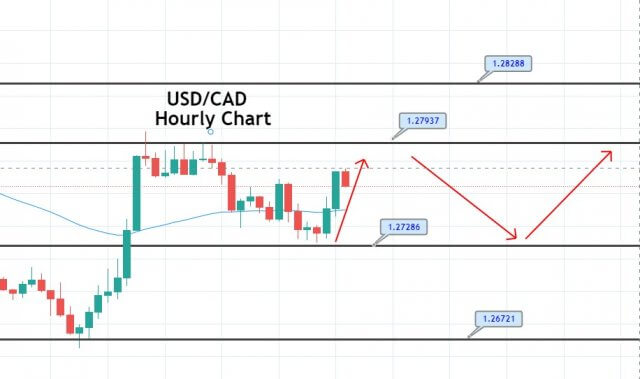 The USD/CAD currency pair failed to stop its Asian session losing streak and remain depressed around the 1.2735 level, mainly due to the U.S. dollar weakness. However, the prevalent downtrend in the greenback is mainly tied to the Federal Reserve’s expectations would keep rates low for a prolonged period. Meanwhile, the optimism over a possible coronavirus vaccine and the probability of an additional U.S. financial aid package also played its major role in weakening the greenback, which adds further burden around the currency pair.

In contrast to this, the prevalent downticks in the crude oil prices tend to weaken the commodity-linked currency the Loonie, which becomes the key factor that helps the currency pair to limit its deeper losses. As of writing, the USD/CAD currency pair is currently trading at 1.2736 and consolidating in the range between 1.2729 – 1.2792.

Despite the intensified Sino-US tussle and coronavirus (COVID-19) woes, the market trading sentiment managed to stop its previous session’s negative performance and started to flash green during the early European session on the day, possibly due to the fresh optimism over a potential vaccine/treatment for the highly infectious coronavirus. As per the latest report, the U.S. Food and Drug Administration (FDA) showed that almost 95% success ratio of the leading coronavirus vaccines after two doses. Moreover, the market trading sentiment got an additional lift from fresh hopes of the Democratic victory in the Georgian run-off, which sparked possibilities for additional fiscal support. Thereby, the prevalent upbeat market mood undermined the safe-haven assets, including the safe-haven U.S. dollar, and contributed to the currency pair losses.

As in result, the broad-based U.S. dollar failed to halt its overnight losing streak and remained bearish on the day. Meanwhile, the probability of an additional U.S. financial aid package and speculations that the Fed will keep interest rates lower for a longer period also exerted downside pressure on the greenback. The losses in the U.S. dollar kept the currency pair lower. Meanwhile, the U.S. Dollar Index that tracks the greenback against a bucket of other currencies dropped by 0.04% to 89.812 by 8:49 PM ET (1:49 AM GMT).

On the contrary, the crude oil failed to stop its early-day losing streak and remained depressed around below the $47.50 level on the day mainly due to the renewed concerns over the global economic recovery as the number of COVID-19 cases continues to increase in Europe, the U.S., and Japan. Across the pond, the reason for the losses in the crude oil prices could also be associated with Monday’s released downbeat China’s Caixin Manufacturing PMI data, which showed that the activity slowed in December. Hence, the decline in oil prices undermined demand for the commodity-linked currency the Loonie and became the key factor that helped the currency pair limit its deeper losses.

Looking forward, the market traders will keep their eyes on the German Unemployment Rate, which is due at 08:55 GMT, and the US ISM Manufacturing, which is due for release at 15:00 GMT. The updates about the U.S. stimulus package and the virus will not lose their importance across the ocean.

The USD/CAD pair is trading with a bullish bias at the 1.2764 level, holding above a support level of 1.2728, and it may head higher until the next target level of 1.2798 level. On the hourly timeframe, the USD/CAD is holding over 50 EMA, which is supporting bullish bias in the Loonie, whereas the MACD is staying in a selling mode. Let’s consider taking sell trade below the 1.2793 level and buying over 1.2728. Good luck!