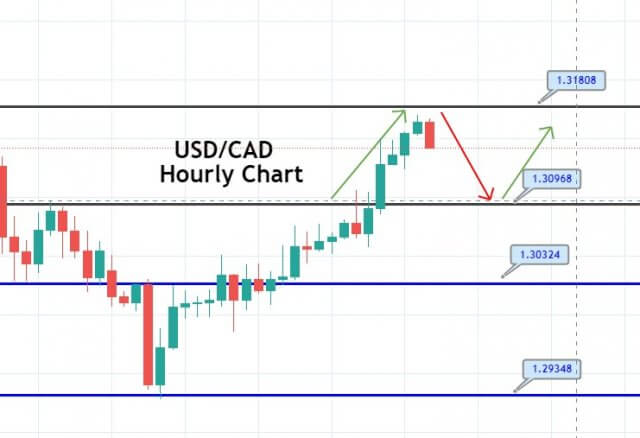 During Friday’s Early Asian trading session, the USD/CAD currency pair extended its overnight losses and remain bearish around the 1.3135 level, mainly due to the broad-based U.S. dollar weakness. Hence, the broad-based U.S. dollar was being pressured by the doubts persist over the global economic recovery from COVID-19. This, in turn, undermined the greenback and contributed to the currency pair losses. Moreover, the political uncertainty in the U.S. also weighs on the already weaker U.S. dollar, which adds further burden around the currency pair.

On the contrary, the decline in the crude oil prices tends to undermine the commodity-linked currency the Loonie, which turned out to be one of the leading factors that kept the lid on any additional losses in the currency pair contributes to the currency pair’s losses. However, the crude oil prices were being pressured by the worsening coronavirus (COVID-19) conditions in Europe and the U.K. Apart from this, the crude oil prices’ losses were further bolstered after the EIA’s downbeat inventory numbers, which showed a sharp build-up in U.S. crude oil stocks. As of writing, the USD/CAD currency pair is currently trading at 1.3139 and consolidating in the range between 1.3133 – 1.3147.

Despite the optimism over the potential vaccine for the highly infectious coronavirus disease, the market trading sentiment failed to stop its previous negative performance and remain depressed during the early Asian session on the day, possibly due to the combination of factors. Be it the worrisome headlines concerning Brexit or the tension between the US-China, not to forget the coronavirus issues in the U.S. and Europe, everything has been weighing on the market trading sentiment; as per the latest report, the U.S. sanctions 4- Chinese diplomats over the Hong Kong crackdown. Apart from this, the Trump administration shows a willingness to limit investments in Chinese companies, fueling the already intensified tussle.

At the coronavirus front, the U.S. coronavirus cases touched a new daily record high, with 140,543 reported. Almost 10.4 million peoples in the U.S. have been infected by the Covid-19 so far. While nearly 242,000 have died so far, according to the Johns Hopkins University report. As in result, New York has announced a 10 p.m. curfew on bars, gyms, and restaurants to curb the spread. Afterward, Chicago also followed the footsteps of New York and restricted activities.

In addition to the U.S., Europe also imposed lockdown again last week, threatening the oil outlook and undermining oil prices. It is worth recalling that Sweden declared a partial lockdown shutting down bars and restaurants for the 1st-time since the virus started. Thus, the back to back lockdowns restrictions keep harming the crude oil demand.

Despite the risk-off market mood, the broad-based U.S. dollar remained depressed. The investors continue to sell U.S. dollars on the back of optimism over the potential vaccine for the highly infectious coronavirus disease. Moreover, the losses in the U.S. dollar could also be associated with political uncertainty in the U.S. However, the U.S. dollar losses could be considered the major factor that kept the currency pair under pressure. Meanwhile, the U.S. Dollar Index that tracks the greenback against a bucket of other currencies dropped to 92.957.

The crude oil prices dropped further after the U.S. Energy Information Administration reported that crude oil inventories across the country climbed sharply by 4.3 million barrels last week, against expectations for a draw of 913,000 barrels. Moreover, the decline in crude oil prices was further bolstered after Libya’s oil production increased, which eventually raised fears of oversupply and undermined the crude oil prices. Hence, the declines in oil prices undermined demand for the commodity-linked currency the Loonie and became the key factor that helped the currency pair limit its deeper losses.

In the absence of the major data/events on the day, the market traders will keep their eyes on the ongoing drama surrounding the U.S. elections result and updates about the U.S. stimulus package. In the meantime, the risk catalyst like geopolitics and the virus woes, not to forget the Brexit, will also be key to watch for a fresh direction.