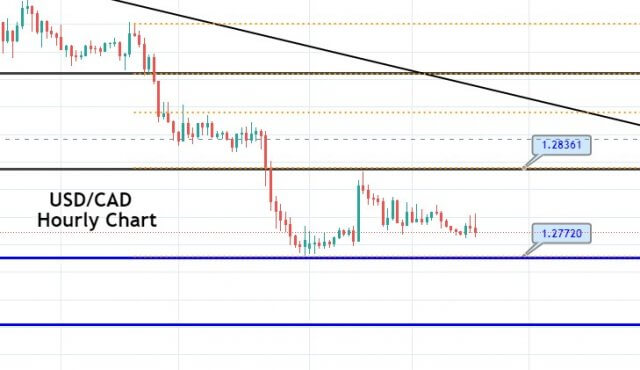 The USD/CAD pair was closed at 1.27993 after placing a high of 1.28328 and a low of 1.27738. After posting losses for four consecutive days, the USD/CAD pair raised on Monday amid the US dollar’s strength and declining crude oil prices. On Monday, the US dollar was strong in early European trade as the coronavirus cases continued to rise and lockdowns expanded that added weight on the hopes of the US economic recovery. The US Dollar Index that tracks the greenback against the basket of six other currencies raised by 0.3% to 90.993 and supported the USD/CAD pair’s an upward trend.

The rising number of coronavirus cases in the California State pushed its governor to extend the time duration of imposed restrictive measures and raised the safe-haven appeal to impact the US economic recovery. The rising demand for safe-haven added strength in the greenback that pushed the USD/CAD pair higher.

The recent sanctions and travel ban on 14 Chinese officials from the US government also added the appeal for safe-haven as it would escalate the dispute between the world’s two biggest economies. The rising safe-haven appeal added strength to the greenback and supported the USD/CAD pair’s an upward trend. Meanwhile, the WTI crude oil prices on Monday also declined to $45.34 per barrel level and weighed on Loonie’s commodity-linked currency. The declining Canadian dollar also added to the upward momentum of the USD/CAD pair.

The Canadian dollar was the second worst-performing currency among the G10 currencies on Monday, partially because of the profit-taking in the wake of last Friday’s much stronger than expected November jobs report. Besides, the risk-off market mood weighed on risk-sensitive Loonie and added strength in the USD/CAD pair. On the data front, at 20:00 GMT, the Ivey PMI from Canada raised to 52.7 against the forecasted 52.3 and supported the Canadian dollar that capped further gains in the USD/CAD pair.

The USD/CAD pair is trading sideways at the 1.2789 level due to a lack of volatility in the market. On the lower side, the support holds around the 1.2770 level, whereas the bullish trend continuation can extend the buying trend until the next resistance level of 1.2835. We may not see a further trend in the pair until this range gets violated. On the lower side, a bearish breakout of the 1.2770 level can extend selling bias until the 1.2720 level. It looks like investors are waiting for a solid fundamental to determine further moves in the market. Let’s look for selling below 1.2836 and buying over 1.2770 level today. Good luck!